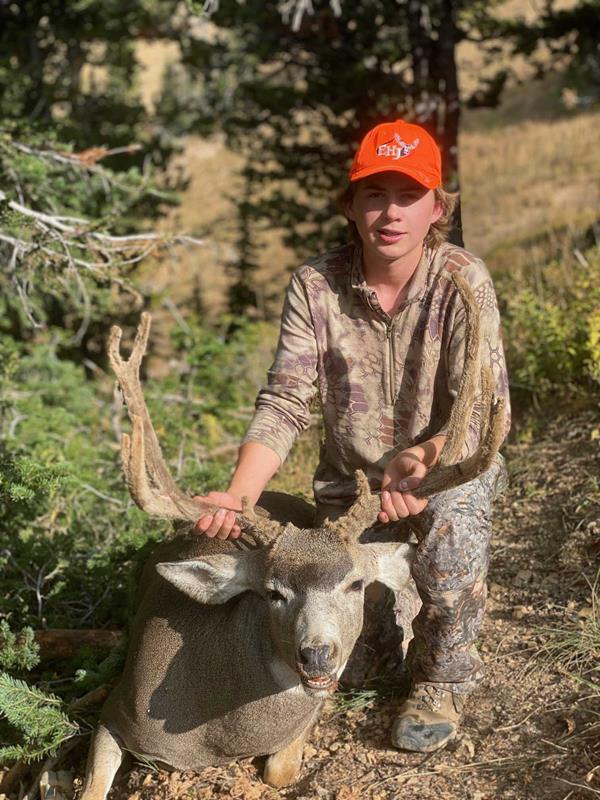 As naturalist John Muir once said, “The mountains are calling, and I must go.” In 2020, my two sons, nephew, and I answered that call, spending 26 days backpack scouting and hunting the mountains for mule deer in Wyoming and Utah. Seventeen of those days were in the beautiful and rugged Wyoming Range near the Idaho border. That summer, we took two three-day scouting trips to different drainages in our Wyoming unit. We found multiple shooter bucks in both scouting areas, but we ultimately decided to hunt the northernmost area because, although it had fewer bucks, the bucks were larger. As Tommy pointed out after the hunt, “We probably wouldn’t have shot a nice buck if we hadn’t scouted so hard.”

In particular while scouting, we spotted five big bucks in our target area, including a wide and heavy 185" 5x4 and a tall and heavy 175" 4x4. We also saw many other cool animals, including a black bear. Hunting these bucks would require that we hike seven miles, gain 3,000 feet of elevation, and pack in all our water due to the lack of water among the peaks. We decided to rent pack llamas to help us carry our food and water in for a seven-day hunt and to pack our deer out.

If you are, like me, your garden variety fool and enjoy grueling workouts, smelling like a Mongolian yak, dehydration, and living in the dirt, become a backpack hunter for mule deer out west. If you want to add to all that a large helping of humiliation and defeat, do your backpack hunts with your teenage sons and nephews who are 30 years younger than you, 50 lbs. lighter than you, and whose muscles can recover from strenuous activity overnight. Given that I am not the sharpest tool in the shed, I choose to backpack hunt with such youngsters regularly.

The night before we left on our Wyoming hunt, the llama rental company informed me that they had decided to give us two young and inexperienced llamas so that we could train them on the trail. I can only assume that the llama owners mistakenly assumed we were seasoned llama wranglers or that they had just come off a two-day boozer and were blind, drunk, and didn’t care what llamas they gave us. Either way, this was our first time taking pack llamas into the mountains. As it turned out, these young, inexperienced llamas would frequently lie down in the trail and refuse to go any further, and when pushed, they would spit while making angry faces at us. The llamas’ poor behavior led me to drop a number of choice four-letter words on the trail. For example, one of the llamas, named Kapil, didn’t like to pack uphill. And the other llama, named Raja, didn’t like to pack downhill. Nevertheless, we persisted.

Opening morning, we started early and hunted hard. To our chagrin, we learned that our “secret” backcountry area was in fact highly favored by a number of Wyoming’s top mule deer outfitters. As we explored the areas where we had seen the largest bucks on one of our prior scouting trips, we found guides and clients already glassing. They killed the 175" 4x4 we had scouted earlier. The 185" 5x4, as big bucks so often do, became nocturnal during the hunt. Competing with seasoned guides and outfitters made us feel a bit like the 1980 U.S. men’s Olympic hockey team playing the Soviets. We were serious underdogs!

To make matters worse, visibility was limited to a mile or less due to the now common summer wildfires in the western U.S. Add to that unseasonably warm, sunny weather with little rain over the summer and it made for tough hunting conditions. Nevertheless, we stuck with it, and late opening morning, while hiking to another canyon in the drainage, we stumbled upon two nice bucks, one in velvet and one hard- horned, slowly running 200 yards ahead of us towards the cover of some thick pines and a deep canyon. I quickly judged one of the bucks to be a shooter and called out the range to my son. I told him to kill the larger if he was comfortable with the shot. He fired and scored a solid hit on the bigger buck. Not long after, my son, Tommy, was holding the rack of his first Wyoming backcountry velvet mule deer in his hands. He had a smile on his face and a deep sense of accomplishment and gratitude in his heart. The canyon this buck died in was steep, rugged, and magnificent.

The Euro mount of that buck, expertly preserved by our taxidermist, now adorns my son’s bedroom wall, a memento of a great challenge overcome, and father-son bonds formed in God’s country. Reflecting on this hunt, Tommy said, “This was the hardest hunt I’ve ever been on, both mentally and physically. But the payoff was 100% worth it in that I made a lot of great memories and learned a lot about hunting.”