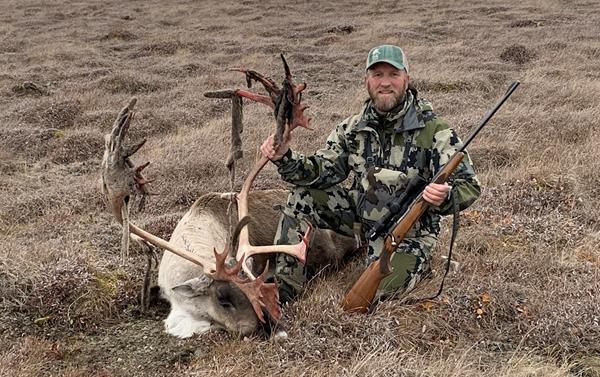 The herd of caribou was a mile out, heading in our direction with all the urgency about them as a flock of south-bound geese. The first bunch consisted of 35 or so animals with another equal size bunch behind them a few hundred yards. My son, Chantz, and I screened behind a rock and watched them through our binoculars and spotting scope. The herd seemed to be mostly bulls. It was quite a sight! Chantz was looking through the spotting scope and commenting on this bull and that bull. “That one has a huge shovel.” “Look at that big one up front!” “I like that one.”

Through my 12-power binoculars, I could see many impressive bull caribou. Some had strips of velvet hanging and swinging from their antlers as they plodded across the tundra. I was mesmerized by the sight. It looked like they would walk right to us. Then, I noticed a small ravine cutting off to the left. As the caribou approached it, they went down and out of sight. A moment of panic hit me as I feared they could be traveling down the ravine and away from us. “Chantz, we have to move fast. We need to get to the lip of that ravine and cut them off.”

I took off as fast as I could across the tundra. A hundred yards later and I was still 100 yards from being able to see into the ravine. No sign of the caribou. Could that many caribou get across the tundra that quick? I looked back to see what Chantz was doing. He was behind me a ways. What was he doing? He should be outrunning me. Then I heard him whistle and point back to where we had last seen the herd. I could see the tops of their antlers coming into view. They hadn’t cut down the ravine, but they were out of sight while they crossed it. Now we needed to get back to the rock and fast!

We moved fast, but we didn’t make it back to the rock. The first caribou was clearing the skyline. I looked at him through my scope and noticed large palmated tops. Chantz was trying to tell me to let the herd get into view, but I only heard part of this because I had lined the crosshairs up on the bull and shot him in the shoulder. He stayed up, wobbling on his feet. I shot again. He wobbled a bit more and then sunk down upon the tundra. The herd stopped, milled about, and looked around with a questioning behavior of who would lead them now. Oh boy, did I screw this up for Chantz? He was patiently looking the caribou over, and he already knew which one he wanted. Chantz waited, and as the herd moved off to our right, headed straight for the rock, his bull followed last in line. A couple shots later and his bull was down.

We were on a self-guided drop camp hunt in the Brooks Range of Alaska. Two years of planning, saving, and dreaming had brought us here. An Alaskan outfitter that we met at the Expo and who operates in this area in Alaska once told us, “Every hunt you have ever been on and every hunt you will ever go on, you will compare to this one.”

I have always wondered if I had lived when the bison were thick upon the plains, would I have traveled and hunted them? The bison are not thick upon the plains today, but we can hunt caribou. I had always wanted to hunt in Alaska. The best part was that Chantz wanted to go too. I couldn’t have done it without him.

This trip was full of adventure from start to finish. I think of the hunt often. It was an epic hunt with my son, the Arctic, the caribou, and the experience. Yes, I will compare all other hunts to this one.