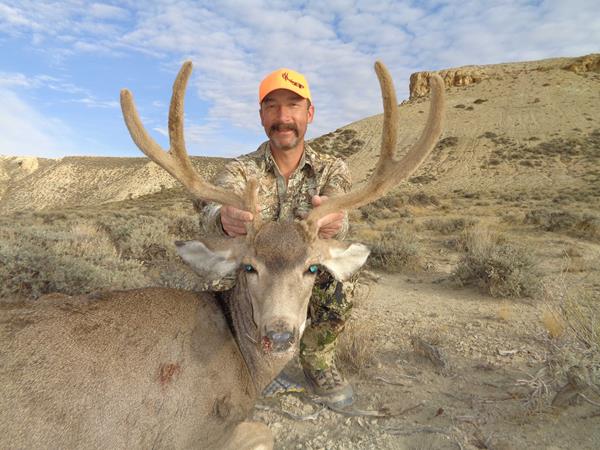 This trip started with my son, Jake, wanting to help me on a high desert Wyoming mule deer hunt. I told him that he had enough points for antelope in a nearby unit. Jake’s wife, Katelyn (who was going to be 23 weeks pregnant at the time of the hunt), was interested in coming along. This would be Katelyn’s first out-of-state hunt with us. I wanted it to be a great experience for her, but I was unsure about the rough roads and hiking involved. It was also Jake and Katelyn’s first anniversary that week, so they were detouring and meeting me in Wyoming. We stayed in a motel for the most comfort.

I scouted a day and a half before Jake and Katelyn arrived. The antelope season had been open for more than a month, so Jake was just looking for a good representation. The antelope bucks had been picked over heavily, but there were plenty of young bucks. A few hours into the hunt, a nice antelope buck walked right in front of the truck, just wandering. This buck was better than what I had seen scouting. I told Jake, “I think I would shoot him.” Agonizingly, Jake let him go. Not only was this the beginning of his hunt, but he was looking for a full hunt experience. I understood and agreed, so we pushed on.

The evening before the deer opener, we spotted a nice antelope buck tending a harem of does. We circled up and around to get the wind as we closed in. The wind switched, and they headed out. They got up on a sage flat where my Leica rangefinder was constantly reading the front of it. As I was giving Jake the wrong range, he hit low. As the buck moved, I received the correct range and Jake dropped him on the spot. It was a bit of a rodeo for a minute, but then it was all smiles. Game meat is precious to us, so we all worked fast together. We boned the meat out and got it to the truck as the last light faded.

The opening of deer brought 30-40 mph winds where I was looking for a velvet forked horn buck that I had seen two days prior. Opening day was a wash. I had seen very few deer on this hunt, so the next morning, we were back after velvet. Katelyn dropped Jake and me off and drove to a predetermined pickup spot. With no wind, we hiked out to a vantage point. As we sat our backpacks down, Jake said, “There goes four deer. The one in the back has horns.” I dropped down behind my rifle. They surprisingly stopped at 237 yards and velvet was down.

I thank my new daughter, Katelyn, for being able to not only feel well enough to come but also for participating and being an integral part of our hunt. And of course, Jake, it’s always a successful hunt when we are together.