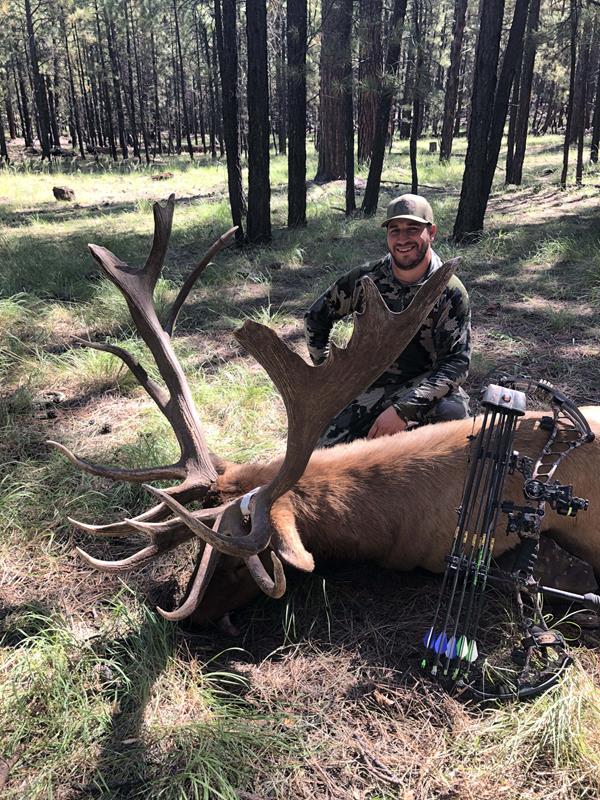 With nine tags in our pockets for the season, I knew it was going to be a busy fall. My house alone was responsible for six of the tags, leaving the other three for my brother, my father, and a good friend of ours. We had tags in four states with five different hunts – four elk tags (three in Wyoming and one in Arizona), one Nevada deer tag, one late season California muzzleloader deer tag, and three other California deer tags in two different zones.

One of the best parts of each season is meeting new people and making new friends. With Wyoming’s archery hunt coming to an end with a respectable 6x7 bull I shot on the second to last day of our hunt, I had three days to make it from Wyoming to Arizona with a pit stop in California for a little gear change, some fresh laundry, and my wife’s birthday. Waking up that next morning and hitting the road driving straight through on the season opener, all I could think about was getting there and meeting up with my buddy, Sean, in time to catch an hour’s sleep before we made it out for my first day of the hunt, second day of the season. Sean had beat me to our destination seeing as how he only had a couple hour’s drive versus my 16 hours. He had time to head out and try and locate some bulls that evening, giving me a report the second I pulled in. With elk in the area, we came up with a game plan for the morning.

Before I even could say I had fallen asleep, my alarm went off. Jumping in the truck with a short drive, we pulled off the road and Sean threw my bugle at me and said, “Let one rip here.” With a bull lighting up here and there, I looked back at him and he said, “Get in. Let’s try another spot.” I did not understand his logic of passing on bulls to find bulls. I shook my head, bit my tongue, and hopped back in his truck. Driving a few more miles up the road, we pulled over again and I let out another bugle. Now I understood what Sean was looking for. With a bull responding here, there, and every way possible, I knew at that moment it was going to be an unforgettable day in the elk woods. With the sun coming up and the roar of the bulls, the vibe was set and it was time to do what we came to do.

As we set out with packs on and my bow in my hand, no more than 400 yards from the truck, we were already sizing up a short topped 6x6. After deciding that I was looking for 300"+ with good tops, we kept hiking. Letting the bull take his cows off, we decided we wanted to head in the direction of this unique growing bull that wasn’t too far off to the east of us. Making small talk and listening to the sounds of what can only be described as a “real life” Jurassic Park, we came across three other hunters who seemed to be unsure of what they were doing. Wondering if that growl was possibly them, we waited for them to make their move. They continued west, so we continued east. It turned out that was a great decision. We found ourselves in the path of a perfectly symmetrical 6x6 with good tops and decent mass. He was a 320" class bull all by himself, looking for some cows. We knew this bull was worth an attempt. With me setting up and Sean falling back, the bull obviously had read the script and was making a B-line straight for us.

Here’s where things get interesting. It turned out those other hunters weren’t responsible for that odd growl of a bugle. A bull to our left let off a hoarse sounding bugle like he’d been up partying in the front row of an AC/DC concert all night and had no plans of stopping. With this 320" 6x6 coming in on a string, we couldn’t help but turn our attention to this unique sounding bull. I will never forget my reaction as I peered through the pines with my binos. I slapped Sean’s chest repeatedly, stumbling through some words that were supposed to sound like “holy” “palmated” “giant” “trash” all filled in with a few choice four-letter words.

Instantly, we both dropped our binos and looked at each other in disbelief. With this bull pushing his cows towards another bull’s harem, we knew it was time to make a move. As the growler was taking whatever he wanted from whomever he wanted, we grabbed our gear and made the 200-yard full speed sprint. Using the pines and the full-blown rut to our advantage, we made our way in their direction to within 100 yards. The growler had shown us as well as that other bull who owned this neck of the woods by stealing his cows and putting himself between him and them. Little did he know that we luckily put ourselves between him and his cows. With Sean 25 yards to my right and a camera in his hand, the bull decided to close the distance. Ranging him at 95 yards, I quickly ranged three pines in front of me on the path he seemed to be walking. I dropped my rangefinder and nocked an arrow.

At this point, it seemed like time was almost standing still. With the bull now at the 50-yard tree and closing, tunnel vision set in as well as target panic. The bull stopped at 30 yards, let out another bugle, turned, and started to walk back in the tracks he came in on. At this point, it came to my attention that I had yet to draw back. Snapping out of the tunnel vision as the bull walked behind my 40-yard mark, I drew my bow and settled my pin as he appeared on the other side. Stopping for a fraction of a second, I moved my sight forward into the shoulder, knowing that he was going to take that next stride before my arrow was going to make it there. For anyone who has archery hunted, you all know this part too well, the “What just happened?” moment. In that split second, you’ve witnessed the shot, replayed it twice in your head, and tried to comprehend what just happened. This was all running through my head before I heard those two unforgettable sounds of the string releasing followed by the unmistakable thwack of hitting the pocket.

Watching that bull run off, crashing through the limbs, and seeing my arrow placement turned my stomach inside out. Not comprehending that my arrow found its place but had not passed through, it appeared I had possibly made the biggest choke of all elk hunting history. After hearing Sean’s words of constructive disappointment and possible failure, we watched the video and decided to give him some time. It was not long before my A.D.D. kicked in and I went 80 yards to where we last saw him disappear in search of blood or tracks. After picking up his track and realizing he had a heavy right front foot, we decided to go another 20 yards where we found a fresh bed with blood. I walked up 20 more yards on another bed with more blood in it. A rush of emotions was running through my head as Sean disrupted my thought with what I could only imagine was one of history’s top five most historical battle cries. There he was laying there only another 40 yards past him.

Go elk hunting, they say. It is fun, they say. What they don’t tell you is that every time you step into the elk woods, you’re about to take an emotional, mental, and physical roller coaster ride called archery elk hunting.

We finished out the season successfully with the rest of our tags. My wife took a great California blacktail as well as a respectable Nevada mule deer. My brother ended up with a giant California muzzleloader buck that will be hard to beat. It was definitely a year of tags.

I want to thank everyone who’s helped me and guided me along the way growing up, especially my dad for getting me into hunting on day one and into archery hunting by the time I was 12. It will always be appreciated, and I thank you for that! I also want to say thank you to my wife who is undeniably the most patient and understanding person I have ever met. By the way, just nine months after her birthday, we welcomed our third child into the world, Thomas Albert Giovannoni “T.A.G.”