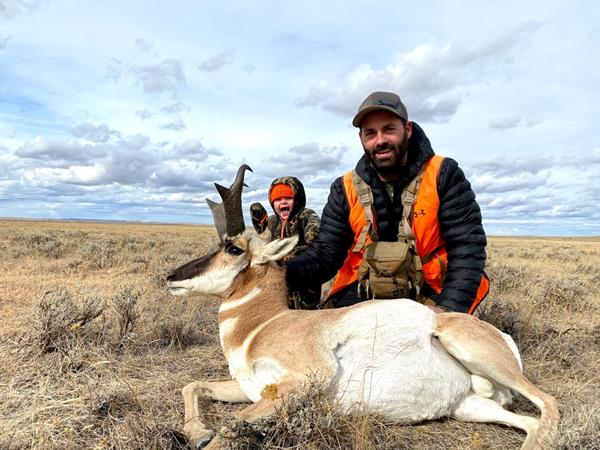 Where’s your sitter?” Chatting with the neighbors in camp, their eyes widened when they realized it was just the three of us on the hunt (my wife, our 14-month-old little girl, Reese, and me) with a pocket full of tags to fill.

For years, we had planned on an antelope hunt as an ice breaker to experience hunting for our little ones, and this was the perfect year to cross it off the list. Reese, however, was no stranger to hunting as she’d already been involved in several hunts, including one trip to Montana at 3 months old, a pack out of a bull elk her mom shot, and a great blacktail buck her mom shot near our hometown. This trip would be a lot different, though, with Reese being a lot more active and engaging, plus it was just the three of us. This was a trip Ali and I had been looking forward to for a very long time, sharing the outdoors with our babies.

The trip getting there was full of excitement, but as eager as I always am to get there, I know getting there is half the fun. With a little one in the backseat, it added a whole new level of (mostly) fun to the trip.

We had signed up for several BMAs throughout the week. This was an area where we had never been before, and we had to do all our research “e-scouting.” Knowing antelope are not the toughest animals in the world to hunt, our focus was to find Ali and me each a respectable buck, but our main priority was to do everything we could to include Reese in the whole hunt while keeping her comfortable and happy.

We each had a buck and a doe antelope tag. Ali also had a mule deer doe tag that we thought we could use opportunistically or just tag it onto the end of the hunt if everything went well on antelope.

Day one of our hunt was opening day for rifle antelope. We left camp full of excitement and a little anxious about how it was going to go packing a 1-year-old through the open prairie. Arriving at our BMA, we signed in and started glassing. Right away, we started picking up some antelope. Our hearts sank as we watched some guys chasing antelope on quads, but as we continued to watch, we realized it was actually some ranchers working on rounding up a good clump of cattle they had in the area. The antelope were pretty bunched up along with the cattle, so stalking anything was pretty much out of the question until things calmed down.

As the day moved on, the ranchers loaded up and headed out, so we continued to drive, glass, walk a little, and glass some more. We eventually picked up a bedded antelope buck that looked pretty good, and we agreed we should take a better look. Reese was loving every bit of it. As we closed the distance on the bedded buck, who was half or mostly asleep, we found Ali’s hitchhiker was thinking a nap sounded pretty nice for her, too. Before we knew it, she was out. Whoops! This “taking a baby hunting” wasn’t so hard after all.

After getting within range, we made the call to leave Reese asleep in the pack with me while Mom crawled ahead for a better position to shoot and get the blast of the rifle out in front of the sleeping baby. We packed the suppressor on the rifle for Reese’s little ears more than anything.

Ali made quick work of the shot, and we had one buck down! The shot woke Reese up, or maybe it was the celebrating that followed, but she was still grinning ear-to-ear as we walked up on Ali’s buck. We took a bunch of pictures and did a lot of learning. It was so cool to watch Reese soak this all in.

The next day, we had the same BMA reserved, and with all the antelope we saw, we had high hopes of finding a good shooter buck. The biggest difficulty that day was the wind. It was gusting up to 25 mph, which makes shooting difficult and the antelope get really skittish. I ended up having quite a few failed stalks this day, and at one point, Ali and Reese had to head back to the truck to take a break from the wind, which wasn’t what we were hoping for. Reese got a little nap in (hunting was really tuckering her out), and after that, we were back on the hunt as a family. We spotted a group of antelope with a couple of promising looking bucks. The stalk was on.

Reese and Ali stayed back while Dad shoved tons of cacti into his palms and knees, crawling up to the bedded group of antelope. Reese did actually help on this one, mooing at the cows and getting the buck I had picked out to stand up. Thanks, Reese! One shot and he was down. High fives all around!

Ali and I were both able to fill our doe tags without too much effort, and it was onto the mule deer doe tag, the last one we had to fill. This was a fun one to watch for me. We watched Ali make stalks from the spotter, and Reese and I drove around, mostly to keep her happy. After a few failed stalks, Ali sent me a text, “Did you see?” Dangit, I had missed her take the shot while I had parked the truck to grab a dropped binky in the back seat. Ali had made a great shot, and the doe went down within 40 yards. Way to go, Mom!

This hunt really was a perfect example of a self-guided, opportunistic hunt that anyone can do as a family. I have Huntin’ Fool to thank for all the knowledge I have gained in applying for hunts like this, others in the past, and many more in the future. I have no doubt Reese will be writing these stories for the whole family in just a few short years.