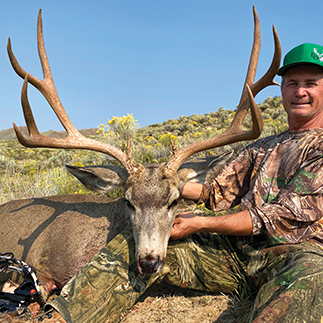 “There’s another doe!” my guide and outfitter, Chance Marshall of Extreme Outfitters, said in frustration. “We have to back out and see if we can get around her before she bolts right towards that buck with the blood-red antlers and shreds of velvet dripping off the rack.” Just as those words came out of his mouth, the mulie doe took his advice and bounced right up the long draw, taking 15 more does and the big, wide mule deer buck right up and out of our stalk.

A long and frustrating day of spot-and-stalk deer hunting in Southcentral Wyoming continued as we were busted by dozens of does and fawns as we searched for a nice buck in a stalkable position. Chance and his father, Kevin Marshall, knew this area well, and it wasn’t that we couldn’t find the deer, we just had too many obstacles to overcome to get into a shooting position. Using my Ravin 20 crossbow, I had practiced out to 90 yards and felt supremely confident that with a solid rest and an undisturbed buck, I could take a nice buck to take back to my home state of Indiana.

The rolling hills of Southern Wyoming near Laramie held good pockets of deer, almost too good. We glassed up dozens of bucks, some in full velvet, others newly shed with their blood-stained antlers glowing in the sunlight to fully dried and bleached racks. As each buck was evaluated and stalks planned, we inevitably ran into does we had not seen along the route. Big-eared does and lanky fawns popped up from the brush and instinctively headed out, taking their boyfriends with them.

After a quick bite to eat and some much-needed hydration, Chance and Kevin spotted a nice buck at the top of a draw with very red antlers. Several other bucks were close by as well as the plethora of does that were either feeding or bedded below. We decided to make a move on the buck, a wide, typical 4x4 that would fit on my wall very nicely. Gathering up my crossbow and the Primos shooting sticks, we got the wind in our favor and started up the draw. Kevin would stay back on another ridge and watch the progression of our stalk and let us know what was happening.

Slowly, we edged our way into the mouth of the draw, Chance leading and me following as alert and taut as the string on my crossbow. Glassing every few steps, we knew where the buck had bedded for its afternoon siesta, and we were in no hurry to rush the stalk and risk spooking the deer. The wind continued to be our friend, but the twitch of a big gray and white ear drew us up short. Ahead of us in the brush stood a big, mature mule deer doe, and she had us pegged. Behind her and up the hill, more does stood up and pinned us down with those laser-beam stares. Chance thought we might be able to bump the does to move away from the buck and give us a clear path to a shot. No such luck. The ladies and kids decided it was time to hit the highway and kicked it up to the top of the draw. Naturally, the buck decided if the girls were leaving, so was he, and up he went. We slipped up to the top as quickly as my old legs could take me only to be greeted by more does. Frustrated, we stood there trying to decide what our next move would be. We had been busted at least six times that day, and it was getting old. Chance was glassing down the draw and saw a couple of bucks slip out and around us. He thought there was at least one good buck, so we formulated a plan that involved a long, looping stalk. With the sun overhead, the temperatures were starting to rise to t-shirt levels and Chance figured the bucks would head towards shade and thick cover. He was right.

Locating several landmarks, we headed back down the draw. Chance glanced up at Kevin who waved us on and around a hill that would take us away from the deer until we could get the wind in our favor again. Chance set a good pace, and it wasn’t long before I had to lose the sweatshirt. We continued the stalk much further than I had thought before Chance started to angle up the hill. He knew the area, and I had great faith that we were making the right moves, but I had to wonder if we could relocate the bucks after such a long stalk. We lost sight of Kevin as the hill blocked his view from us, but we had a plan.

Finally, we were on the downwind side of the draw where the bucks had been headed. With each cautious step, we glassed the surrounding face of the opposite hillside, figuring the deer would be bedded in the tall cover.

Picking the brush apart for any signs of antlers, ears, or a body, we slowly worked our way around the top of the draw. Suddenly, Chance spotted a buck and we backed down again. The deer had not spotted us, and we scooted around downwind again, this time getting above and in front of the deer. Making our final stalk on our hands and knees, Chance spotted the antlers of a young buck only 15 yards away from where we crawled. We knew the big buck was down below us. With the wind right, we decided to wait him out and see what the next move would be. I’d like to say we were rock solid and patient, waiting for the deer to move. In truth, my left leg fell asleep and when I went to reposition, I made too much noise and the young buck bolted towards our target buck.

Things started to happen fast. Chance told me to be ready to take a quick shot. I had the crossbow on the shooting sticks as we watched a nice, wide buck clear the bottom of the draw and run up the other side. The deer then started to sidehill. I moved to get in position for a shot, and the buck spotted us. Chance called out the distance at 70 yards as the quartering deer stared holes into our position. The click of the safety sounded ominous as I centered the crosshairs on his chest. I honestly took only a second to check out the rack before the scope reacquired the buck and the shot was away.

Several things happened all at once. At the impact of the bolt, the deer dropped down and ran up the draw. Chance said he heard the arrow hit. I saw the buck run uphill and then over. Kevin, who was watching from further away, couldn’t see the shot but watched the deer run and then pile up on the other side of the hill. He called to ask what had happened. I sat there in stunned disbelieve that I had just tagged a great-looking buck. However, now was not the time to celebrate until we found the buck.

Going to the last spot where I had seen the buck stand, Kevin directed us to the downed deer in short order. A quick word of thanks to the man upstairs and then it was high fives and picture time. I insisted that the first pictures should be of Kevin and Chance Marshall for all their great guiding and assistance on this hunt. I had a great adventure, a fantastic stalk, and some awesome venison to take back home, not to mention a lifetime of memories of a buck that played peek-a-boo through the hills of Southern Wyoming.