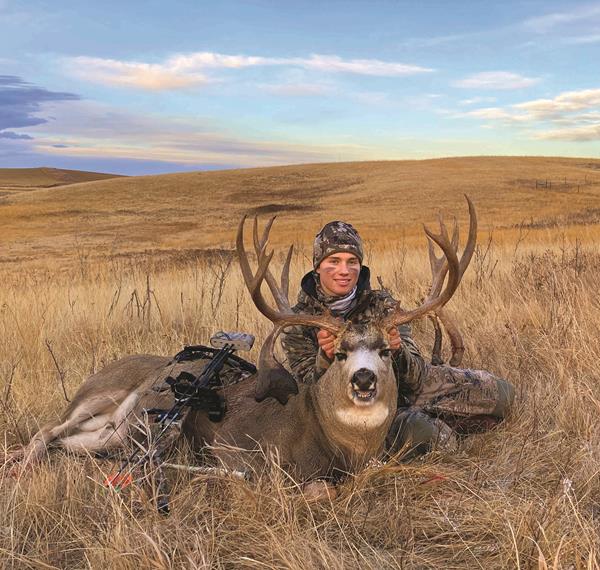 It was September 6th, and fall harvest was in full swing. We were combining lentils when my dad graciously switched me off of the evening shift so I could go scout for deer. I hopped in my half-ton and headed for a pasture filled with buck brush and rolling hills where I had located a group of mature bucks earlier in the archery season. Since it was early in the evening, I decided to take a detour along my route. I was driving down a well-travelled grid road that bordered a huge block of pasture land when I noticed two large bucks ahead of me standing about 75 yards off of a busy gravel road. I slowly drove up to them and my heart began to race. I pulled over and quickly put my binos on them. “What a giant!” I thought to myself. I immediately reached for my camera and began snapping pictures and taking video. I was completely blown away to see that one of the deer was a triple drop tine non-typical with points everywhere, including a gargantuan bulbous drop tine that made it look like he had a bowling ball hanging off of his rack. It was the largest deer I had ever seen. I continued to watch him for a few minutes before he walked over a hill and out of sight. I immediately went back to my grandparents’ farm and reviewed the footage with my uncle, Reg, and grandpa, Don, who are avid hunters. We were all in shock and couldn’t believe the sheer size and uniqueness of him. We decided his name would be “Club” because of the huge club-like drop tine on his right horn.

The following morning, I was out at first light hoping to catch another glimpse of this monarch. Archery season was in full swing, and with it being the September long weekend, I knew there would be many fellow hunters around. I began driving down the same road as the day previous, and to my surprise, Club was in the ditch along the road. He was headed toward the alfalfa field, which I figured he must have been going to the night before. I drove past him and parked my truck half a mile from where he was possibly going to cross out onto the field. I sat in the truck for a few minutes with my binoculars glued to the road to see if he would cross. Sure enough, Club came strutting across. I grabbed my bow and began sneaking along a drainage ditch, trying to cut him off before he got past me. I was making my way along and visualizing what I was about to do when suddenly I realized I had forgotten my release in the truck, which would make it impossible to draw my bow. I sprinted like a mad man back to the truck and grabbed my release. When I got back to where the buck was, Club was now grazing in the alfalfa amongst the bales. I tried to sneak along a small ravine, but he had me pinned down rather quickly and knew something wasn’t right. He trotted over the hill, and by the time I picked him up again, he was well over a mile away and headed into some big, unknown territory.

I sat on the top of a hill, thinking about how I had just blown my chance on the biggest deer in the country. With this being my first year archery hunting, I quickly realized I might be in over my head trying to take down a deer of this caliber. As I walked back to the road, a total of seven trucks with hunters in them drove down the same road Club had crossed an hour ago. I was feeling pretty down about my chances of killing this deer.

Over the next few days, Club seemed to be invisible. I was out every morning and night spotting from vantage points with zero sightings. I truly thought I’d never see this deer again. Finally, a week after the initial sighting, I got a call from my uncle who said he had just watched Club walk into a small section of pasture by the road with only a few hiding spots and was sure he had bedded down in there. We met up and our game plan was to slowly walk in and try to spot him before he spotted us. We split up and came from two different directions. With only a few small bushes and sloughs for him to hide in, it seemed like it was going to be easy to find him again. Turns out he was nowhere to be found.

The following morning, I was on a vantage point on top of a hill watching the same area as he was in the day before. I was just about to pack up my gear when suddenly a big deer stood up in the exact slough we thought he was in from our previous attempt. I immediately knew it was him. We made a game plan, and I was headed in to try and spot him again. I crept onto the slough through the winding hills and scanned every inch of it, but I could not find him. I glassed, and it seemed that he was once again nowhere to be found. I started feeling defeated, and I thought he was gone. I began crawling along the slough and was going to head back to the truck when suddenly I spotted a tiny piece of velvet among the grass. He was in there the whole time! I slowly made my way into the slough until I was inside of 20 yards. He quickly stood up about an hour and a half into the stalk and repositioned himself even closer to me. I waited a long seven hours before he began to make his way out and onto the pasture where I’d potentially have a shot at him. I ranged him, and he was already 62 yards away from me feeding broadside. Although this shot was tempting, there was no way I was comfortable shooting at that distance. I hoped he would try to feed toward the alfalfa field, but he gradually went in the opposite direction. I was heartbroken.

It was now the beginning of October, and I had a month left of archery season to pursue this deer. Every morning would start off the same. I would sit on my vantage point glassing the steep hills and bushes for any sign of the giant. I would be able to find him about 40% of the time. I could locate him in the mornings, but every time he went up into the hills or tucked over the next rise out of sight, he would vanish. There were a few other hunters frequenting the same hills he lived in, and it was making things that much more challenging. Over the course of the month, I put so many stalks on him I lost count of how many it really was.

Before I knew it, the last week of archery season had arrived. There was no more playing it safe, it was now or never. Club was beginning to move out of the big hills and hang out closer to the road. One morning, I caught him bedded right in the ditch off of the main grid road. I grabbed my bow and began making my way along the ditch towards him. Club ended up busting me on that stalk, but I got lucky later that day and picked him up again a few miles away in some wide open, hilly pasture. I had my hunting partner, Ethan Ernst, with me now, and I made a plan to stalk in on him as he was bedded on a hillside by a rock pile. I stealthily worked my way towards him when I thought I heard a quad along the trail about 200 yards away. Club snapped his head towards the trail and was gone. It was a local farmer checking his cows.

The following day, it was October 30th and the second to last day of the archery season. I quickly picked up Club as he was right off a road near an old gravel pit close to where he was the day before. I snuck to a vantage point, trying to see where he was headed or what direction he was going. After an hour of glassing, I decided to use the wind to my advantage and slowly walk through the abandoned part of the gravel pit. I began making my way slowly along a ridge when I spotted the top of his rack. He was staring in my direction, and I knew he had already heard me walking in. I slowly backed out and texted Ethan to meet up so we could make a game plan on him. The wind began blowing hard, which made moving around easy.

We met up and decided to come from a different direction to see if we could stalk him from a better angle. This turned out to be our golden ticket. We crawled up the side of a rock pile we thought he might be near, and we were already within 60 yards of him. He was facing straight away from us and was completely relaxed. Once we had better view of him, we realized I would be able to sneak in even closer due to sharp drop-offs and cuts from old dig spots. I crawled feet first until I reached a bank that connected to a flat where he was laying. I peeked over the bank and he was still bedded there only 26 yards away.

After a short 45-minute wait, Club stood up quartering away and was staring directly at the spot where I had been sitting only a few hours earlier. I drew my bow back and steadied my pin on his vitals. I let the shot go, and it looked perfect. Ethan came running up to me, and we agreed it looked like a good shot. We ran up a hill and watched him bed down in a small patch of buck brush a few hundred yards away and gave him plenty of time. Finally, Club tipped over for good. The bittersweet feeling of killing this deer is something I cannot put into words.

My father, a couple of good friends, and another archery hunter who was hunting Club came to help load and admire him, which is what it’s all about to me. I will forever treasure my memories and experiences hunting Club, and I cannot thank the landowners enough for making it all possible.