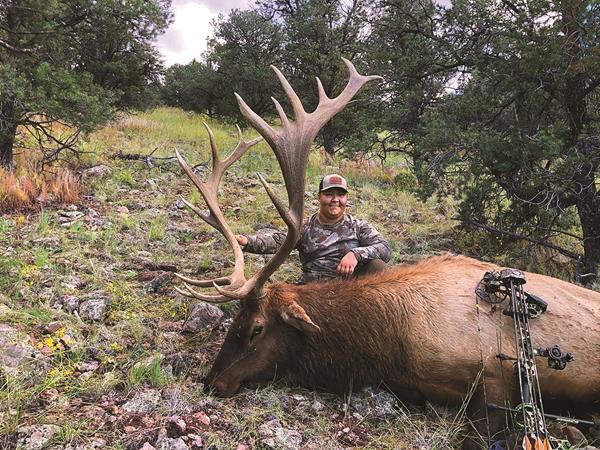 My dad and I applied for the New Mexico draw in the spring of 2020 with the help of my brother-in-law, Brendon Rosales (owner of High Mountain Hunts). When draw results came out, I was very excited to see that I had drawn first archery elk September 1-14. The unit that I was lucky enough to draw is one that my brother-in-law spends a lot of time in, so I spent the summer checking cameras and learning springs for the hot days of September. We were having a very dry year, and bulls were hitting the limited water sources. Everything was falling into place until heavy rainfall made water readily available across the unit. The elk patterns were changing, and we had to adjust our game plan.

My dad and I hunted hard for 10 days straight, alternating between chasing bugles and sitting watering holes. We hiked a lot, and I had a great time sharing the mountain with my dad as he taught me a lot about calling, hunting, and chasing elk. Unfortunately, we could not outsmart the elk.

As a new year of applications approached, the anticipation grew. It was finally here. My dad, my brother-in-law, and I sat down and put together a game plan for me to apply for deer and elk with my bow. When applications were sent in, the wait left me with time to prepare my equipment and myself for the upcoming season. Due to tragic events in my family, my sister and brother-in-law moved in with us. Knowing the hurt my family was enduring, it was hard to be happy when draw results came out. I was successful drawing early season mule deer and second season elk, both archery hunts.

After graduating high school in May, I had more to time to practice with my bow. We started getting rain early in the year, and tanks started to hold plenty of water. With the year my family was having with the loss of our little niece, granddaughter, and daughter, we did not get around to scouting like we would have any other year.
September was here before we knew it, and the first few days of September consisted of hunting deer and scouting for elk. With little to no luck hunting deer and Brendon having to leave to guide clients, the early days of September were slow. With my dad having to work, I was only able to go out a few times by myself to try and locate a bull prior to my hunt.

My dad and I both had to work the opening day of my elk hunt, but we were able to hit it hard the next few days. With my brother-in-law guiding clients in the same unit, he was able to tell us a few bulls’ locations that they were passing on. I really had my sights set on something 330"+. My dad and I had a couple of encounters with some 300" type bulls but nothing I wanted to hang my tag on just yet. The second to last day, we got a call from our buddy who had a big bull spotted. My brother-in-law also called us, letting us know that he was going to be able to help us the last day.

As we left the house, I was excited to have two of the best guides I know helping me. First light broke, and we began to glass. Fifteen minutes later, we received the call we’d been waiting for. Our buddy had found him! We jumped in the truck and headed that way. When we arrived, the bull was pushing 25 head of cows, so we had our work cut out for us. Leaving my dad and our buddy behind, Brendon and I began the climb to get in position.

We popped over the ridge, and Brendon located the bull and his cows. We were 125 yards away and began to crawl to get into position. As we closed the distance, we soon discovered that a spike bull and cow had us pinned at 35 yards. We sat for three hours in the hot September sun with the target bull within 90 yards. As we sat there, the wind started to swirl and Brendon told me, “Get ready. They’re going to smell us.” The elk blew out of their beds. Brendon cow called and stopped the bull at 81 yards. I dialed the pin and released an arrow. I heard Brendon say, “I think you missed him low.” My heart instantly sank. Miles were spent hiking and stalking only for me to miss the bull of my dreams.

After the miss, my dad called and said he had eyes on the bull and that he thought he would bed soon with the heat. We started the hike back down to the truck where we met my dad with eyes on the bedded herd. Frustrated, tired, and discouraged about the miss, I was not sure if I could make another hike to the bull. I looked to the sky and asked my little niece, “Rynni, give me a sign.”

We drove around the ridge, and I knew I had to try one more time. My brother-in-law and I started another stalk with my dad across the ridge guiding us close. We knew we were close to the bull when Brendon turned and saw a cow bedded beside us. My dad called and said the bull was lower into the herd. Brendon let out a cow call, and the bull answered. We started closing distance.

I stopped Brendon and said, “What’s that coming through the trees?”

He replied, “That’s him, get ready. Forty yards!” I drew my bow and sent another arrow towards the bull of my dreams.

Brendon quickly called my dad and said we had an arrow in the bull. As we walked to where the bull was standing, my dad yelled out, “Dead bull!” We came around the trees and all I saw was the bull of my dreams piled up. We waited for my dad and friend to walk up on the bull, and we were all overwhelmed with joy! This was my first elk, and I shot him with my bow. I knew it was Reighlyn helping the whole way.

I would like to thank my dad for all the years dragging me around the mountains and showing me how to hunt, my brother-in-law for being the best big brother and helping me, my mom and sister for encouraging me when I felt like quitting, and all my friends who helped along Rynni for looking down the strength to make the the way. And thanks to on me and giving me final stalk.