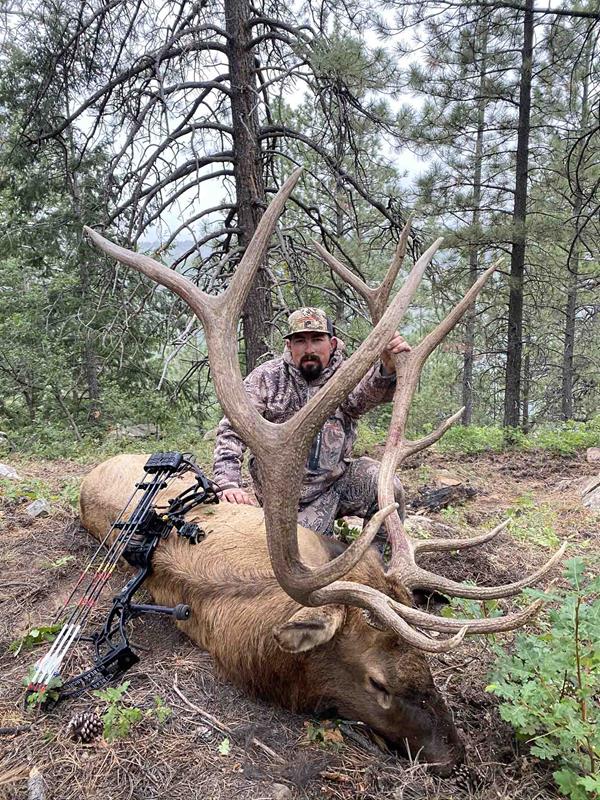 In 2016, I was lucky enough to draw a Southern Utah limited- entry archery bull elk tag from the Western Hunting and Conservation Expo. After three weeks of tough hunting, my brother, Brett Broadhead, and I found what we called the “honey hole,” a big wallow tucked back in the pines along the edge of a deep canyon. At the honey hole, I called a great big bull right to us. He came in at 40 yards, and I drew back and let my arrow fly...right into the trunk of a tree. We were never able to connect with that bull again, and I had to make the long drive of shame home when the hunt ended.

Fast forward to 2020 when I got lucky and drew the same tag again. My family and I scouted the unit every weekend we could over the summer. The first place we headed for was the honey hole, and sure enough, there was elk sign everywhere. I set up my trail cameras and blind at the honey hole, scouted tons of country, and eagerly waited for opening morning.

The night before opening morning, I pulled my honey hole trail cams and was not disappointed. Bulls were coming in almost daily. I thought I had a pretty good chance of harvesting a bull the first week of the hunt. Opening morning came, and I sat on the honey hole in the blind, but nothing. That evening, I took my boy to sit in the blind with me, hoping he’d get to see the elk come in. Again, nothing. I hunted the honey hole day in and day out for a week straight and couldn’t believe it. The elk had moved on. My family and I packed up camp and headed home. We’d be back up in a week.

We came back to camp renewed and ready to hunt. My brother-in-law, Kayden Kennedy, came down to hunt with me for a few days. We hunted hard in some different spots. Every day, we were able to get into the elk, but our plan just never came together. He headed home after a few days, and I hunted solo. I was able to call in some really awesome bulls and almost got a shot off a couple different times, if it wasn’t for the wind or thick trees.

My brother, Brett, came up to elk camp. Even though the honey hole hadn’t had too much action the last couple weeks, we decided to give it another shot. Once again, it was slow at the honey hole with a few deer and a couple squirrels. We threw out some cow calls and a couple bugles and had some bulls bugling back at us from deep down in the canyon. It sounded like they were slowly making their way towards us, but it was starting to get dark. We figured it would be totally dark by the time they made it close enough to the blind, so we started to pack up to head back to camp. Right before I was about to get out of the blind, I could see movement in the trees about 80 yards away. Six head of cow elk were moving towards the wallow with a big old bull pushing them up from behind. The bull circled his cows while they watered at the wallow, and I drew back, hoping the bull would stop broadside to me to drink. He stuck his head down to water but head-on, facing me. There wasn’t a shot. I decided to keep waiting, all while being drawn back. Two and a half minutes passed by, but it felt like forever. I could barely hold on anymore and was about to let off. My arms were on fire. Just then, the bull stood up and went broadside at 20 yards. I could barely see my pins but held right behind his front shoulder and let her fly. We tracked his blood about 100 yards away and found him under a pine tree. A perfect shot. Redemption! We would come back and quarter him in the morning.

We got back to camp, and my wife opened up the camper door to see how my night went. I pulled my sleeves up to show her the blood on my hands. She was so excited that she jumped off the camper stairs and tackled me. My boys couldn’t wait to go see the bull in the morning. Morning came, and I was able to take my whole family to see this awesome bull and have them help quarter him. What a memory to share with my kids.

Not only did I have help from my brother and brother-in-law, but I also had some of the best local guys come to my camp to help me scout, run me up supplies, and show me around the unit. Special thanks to Wayne Johnson and Bob Jolley.