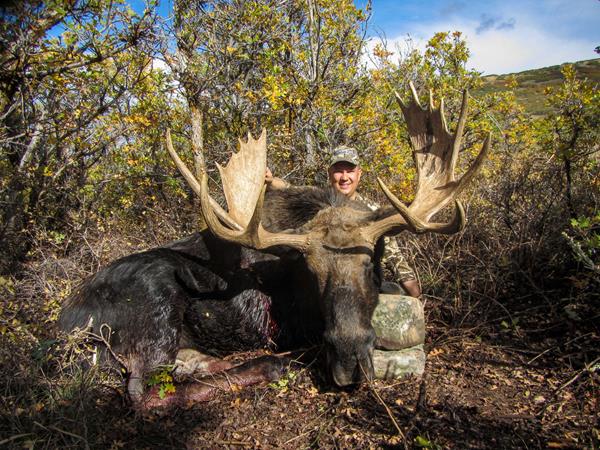 I was 20 days into my 34-day once-in-a-lifetime Utah resident Shiras moose hunt when I got the call. I answered to have Clint, a good hunting buddy (who was already on the mountain muzzleloader deer hunting), tell me he had just spoken to another hunter about a big bull he’d seen minding a cow only two days ago!

Twenty-six long years of waiting and I finally had my moose tag. Of course, the rub with finally getting one of these tags we hunters all dream of drawing is the immense pressure that goes along with it. Failure is too unbearable to even think about! I put in the work, but 16 scouting trips really netted nothing positive. Moose yes, most days, but nothing I was the least bit interested in harvesting.

The season opened, but not much changed. I was still seeing moose most days, but everything with antlers was too small. I had some fun encounters with bulls at close range I was able to call in, but I was getting frustrated with my zero big bull sightings. Finally, things were seeming to pick up as the rut progressed, and my last day hunting had turned up nine moose and five bulls.

I had planned to mostly glass from the road (something that can be effective in this unit) the morning I received Clint’s call, so I did a quick U-turn and headed his way. A second call informed me he and his boys were now watching a small bull and cow. He figured the big guy might soon emerge. I parked at the trailhead, threw on my pack, grabbed my bow, and charged up the path. Only a few minutes later, I spotted the small bull – only one antler with no palm. I worked my way up a little knoll and dropped my pack. Scanning downhill, I spotted the big bull with the cow. Looking closely showed he was big enough for me. Testing the wind, I chose to move to my right, downhill, while closing the range. Sneaking along through the scrub oak, I rounded a clump, an opening in front of me. Two mule deer bolted and then I saw further to my left the cow staring at me. To the left of her was the big bull, only his antlers showing above the oak. I ranged her at 40 yards, and figuring she might continue to move across the clearing, nocked an arrow and attached my release. How long we stood that way I’ll never know, only that it seemed like forever. Finally, the bull swapped ends and moved off totally out of sight behind the big clump of oak.

The stand-off continued with me hearing the bull from time to time rake brush, grunt, or move around. Finally, he plowed through the brush and came out in front of the cow. I tried to stop him with a grunt as I came to full draw. Thwap! The arrow hit the bull, but I worried it was too steep of an angle as he ran off. I hurriedly nocked another arrow and ran parallel to the bull’s last line of travel, back the way I had come. Peering into the brush, I thought I saw something out of place. My binoculars revealed the bull standing broadside at 29 yards in the shadows. It looked like his vitals were exposed through a small opening. I didn’t see any way I was going to get a clearer shot given the terrain. My summer of practicing paid off as my second arrow zipped through the hole and into the bull’s side. He whirled and crashed off through the brush. I called Clint and moved off to retrieve my pack. Hearing I had two arrows in the bull, Clint and his boys came off the hill and met me there. I began to fill them in on all that had happened as they had seen none of the action due to the angle of the hill. I started to show them the little clearing where I had the standoff with the cow when I noticed the big bull bedded down at the far end. I had thought he had barreled off the side of the hill, so I was surprised to see him right there.

The next 100 minutes were spent watching the bull. He got up a few times, only to bed right back down again. At last, he expired and the real celebrating began! I had filled my once-in- a-lifetime tag and taken my first big game animal with a bow to boot. Calls went out, and a couple of additional recruits were brought to the kill site.

Thanks Scott and Cayden! Special thanks to Clint, his boys, Max and Brody, but most of all to my beautiful wife for putting up with my being gone so much chasing my dream.