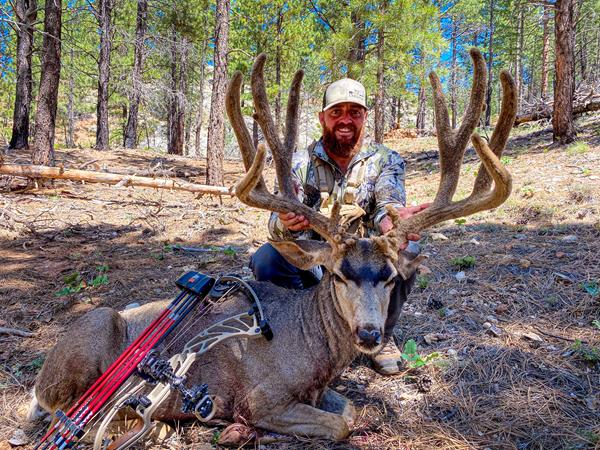 Growing up in rural Emery County, Utah, my childhood consisted of most things outdoors thanks to my dad and mom. My dad had a bow in my hand from about the age of 3, and for as long as I can remember, I’ve almost obsessed and dreamed of harvesting a big, mature deer with a bow. I have harvested a few great bucks with a rifle, but I would have never guessed it would take until I was 33 years old to have that bowhunting dream come true. In 2015, I drew a Dedicated Hunter general season deer tag for a unit I had never stepped foot on. After the first season on the public lands in the unit, I knew there was potential to harvest a big, mature deer.

As a guy who loves spot and stalk style hunting and with a dad who always wanted to hunt the biggest and furthest canyon, I experienced many of the same hardships any bowhunter goes through – blown stalks, other hunters, bad wind, and the natural security systems we call does and fawns. After so many heartbreaks of mistakes, long, lonely walks back to the truck in the dark, and even tag soup on a limited-entry archery Paunsaugunt tag, I finally had the stars align.

My older brother, Tyrel, had spotted a buck about half a mile away in a dark timber face mid-morning. He put on the Phone Skope so we could watch him, and it was a no-brainer that someone needed to try and put a stalk on. I didn’t even get a chance to suggest he should go; I was told that I was going. I picked my landmarks and started on my line to stay out of sight. After nearly two hours, I was on the ridge right behind his bedding area. I slipped off my boots and pack and kept my wind right. My brother couldn’t see the buck anymore, but I had crept about 100 yards when I looked down to the bottom of the draw and there he was! He and another buck had gotten up and were feeding. I was pinned in the middle of a sunny hillside. My heart immediately sank, assuming the worst.

After 15 minutes went by, they fed down the draw out of sight. My mind raced on what options I had. They hadn’t seen me, and it was 1:00 p.m. I thought there was no way they were going far and might come bed again. I gambled and decided I was going to get in the bedding area he was in earlier about 150 yards away. I took the next 30 minutes to walk that 150 yards. Two steps and glass, two steps and glass. With strong winds in my face, everything was perfect, he just needed to show up. I finally made it to the dark timber face, and just as I looked down, I could see his tines at 61 yards! I lowered enough to stay out of sight and nocked an arrow. As I slowly stood, he stepped forward, slightly quartering to me on a steep downhill, his head perfectly behind a tree and leaving me nothing but vitals. I drew my Hoyt and found my anchors. My heart was pounding, but I consciously took a slow breath as I settled my 60-yard pin. I watched my arrow take flight before I heard a loud crack. The buck dropped off the steep face below him and out of my sight. To my left, the other buck sprinted across the opposite hillside but alone. I crept to the edge to look below just in time to watch his head hit the dirt. He didn’t go another 50 yards before he crashed.

I immediately radioed my brother that I had put him down and proceeded to call my dad and wife on the phone. The emotions had hit at that point as I waited for Ty to get to me. We hugged it out with excitement and together walked down to him. As we walked up on him, he continued to grow. We knew he was big, but we didn’t think he’d be that big. Little did we know, we had been watching this buck for three years. He was a companion, better known to us as “Buddy,” to another giant harvested in the area. We celebrated, took our photos, and began breaking him down. Between the two of us, we loaded him up and started the grind. We didn’t make it 45 minutes before we heard our radios go off. My dad had made the drive back to be a part of the moment, and that’s when the big emotions hit of gratitude for my dad and brother. We had watched our dad our whole lives dedicate so much time to conservation projects, helping others, and set the example, and here he was showing up again for us. My pack felt much better lighter, and for the first time in six years, not only did I take the long walk back to the truck with a dream come true, but I got to do it with my mentors.

I can’t end without saying a huge thank you to my mom for being such a great support to my family. Thanks to Josh Evans for being the best friend I could ask for. He has sat next to me for the last 10 years and made some incredible memories in and out of the field. And thank you to my wife, Morgan, for supporting this passion. Cheers!