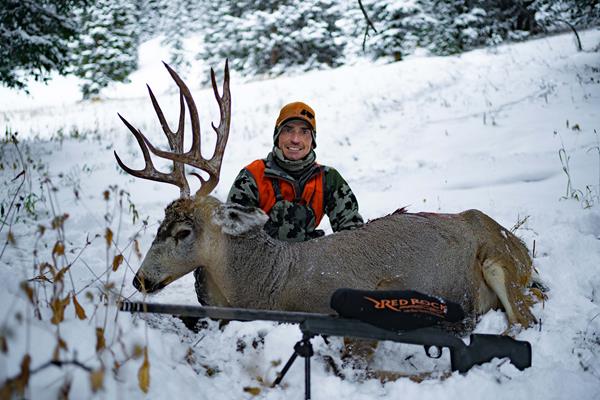 With point creep in Colorado becoming more and more prevalent, hunts that can be drawn with 1-3 points have never been so in demand. The primary focus of this article will be spotlighting second season rifle mule deer hunts. Colorado currently has a second and third combined rifle season on all units west of I-25, with some units having additional rifle seasons in the form of early and/or fourth seasons. The second and third seasons kickoff with the second season traditionally starting the third weekend in October and running nine days and the third season starting the following Saturday and running nine days. Without getting dragged down into the weeds, I will say that this season structure has changed quite a bit for the next five years, with Colorado having pushed the second season to start on the fourth full weekend of October starting this year and continuing that trend for the next five years. This will push everything back a full week and make for a better chance of rut activity during the second and especially the third season. This is not the point of this article, but it is relevant to the conversation as this has the potential to make the third season even that much harder to draw and the second season hunt will be even more important if you want to draw tags on an annual basis. It is also worth noting that they have trimmed the third season dates back to seven days instead of nine.

Second season hunts have always been a sort of dumping ground for Colorado Parks and Wildlife to issue the bulk of their buck tags as this is quite possibly the hardest time to kill a mature buck. Most hunt areas will have anywhere from 20% to 70% fewer tags issued on the third season hunt than the second season, with a few units having a spread outside of those parameters. Statistically, even though there are more second season tags issued, there are often far more mature bucks killed during the third season because the timing of the rut is getting closer during this season and the later in the year it gets the more congregated deer will become and the fewer hidey holes they have. It is no secret that if given the same unit, the third season tag is the one to have, but it comes with a price. Typically, third season deer hunts will require at least twice as many points to draw as the second season, and in some cases, it can require five to six times the amount of points just to hunt five days later in the year. It sounds insane, but those five days can often make a world of difference if you’re looking for a mature buck.

Another factor to consider is the terrain and habitat of the unit. In unit 62, the deer are going to be pretty much located in the same general area regardless of the two seasons as this is a lower elevation unit and not as much migration is needed to be on the winter range. In contrast, unit 55 is an extremely high elevation unit where the terrain can change significantly depending on the weather between the second and third seasons. This is also a reason for the tag number discrepancies between the second and third hunts in these two units. There is a reason some second season tags are easier to draw than others, more so than just the amount of mature bucks available in the unit.

When I am narrowing down units that I feel have enough value to consider applying for a second season hunt, I try to find units that are managed for higher buck to doe ratios. Simply put, you can’t kill an old, mature buck in areas where they don’t exist. I also look for units that have the biggest point discrepancies between the two hunts because I have found that typically tells me that third season hunters are finding good, mature bucks, so they are there somewhere, you just need to find them. I also look for units that have a decent amount of roadless, high elevation terrain that will deter most hunters from harvesting bucks out of these pockets, which, in turn, creates a few public land sanctuaries for bucks to grow old in. These same sanctuaries can exist in thick, dense portions of the unit that are typically their transition zones from summer to winter grounds. Neither one of these areas is easy to hunt, but the reason I like the roadless area a little more is that I can usually get into the same age class of buck but have better terrain to find and hunt them in. You can be hunting a canyon or drainage that could very well hold a giant buck in it, but if you can’t penetrate the cover with your glass or have favorable tracking conditions, the chances of you ever killing a big public land buck are very slim compared to an area with more openings within
the cover.

It really all comes down to the amount of points you have to invest versus your chances of harvesting a mature buck. You will either be hunting units with lower numbers of mature bucks during better season dates or hunting units with higher numbers of bucks during worse season dates. Oftentimes, third seasons will come down to luck. If you have some winter weather to help deer move lower and become more congregated, you’ll have a better chance of mature bucks sniffing around some does. If you are in a unit that isn’t managed for a good number of bucks, even if you get lucky and have great snow and cold temps, the vast majority of bucks that will be close to does will be two to three-year-old bucks. On the other hand, second season hunts will be fairly predictable with where bucks will be located unless unseasonal big storms come in and force deer to lower elevations, but mature bucks at this time of year will not be moving in close to the does. In my experience, mature buck sightings will be close to non-existent at this time of year until you can learn the unit and figure out what elevation and cover they are holding to. This can take years of hunting the same unit to figure out, and even after you have figured it out, it can still be tough to find one. The positive thing is that you will be hunting a unit that will have a better ratio of mature bucks, so odds are when you find a pocket of bucks there should be one or two mature ones in the group.

The big decision you are going to have to make is regarding the new five-year season structure. Beginning in 2021, the second season will have similar dates to the earliest third season dates that occurred during the previous five-year structure. The third season will now shift to dates that have always been reserved for the fourth season, so this will unquestionably have a portion of mature bucks chasing does that will be very vulnerable. This is when the decision becomes much more difficult as you could land yourself on a unit during a second season that is managed for a higher buck to doe ratio but be hunting during historical third season dates. You may also be almost guaranteed to be hunting rutting bucks during the third season but run a chance of not having many mature bucks to choose from.

If you have any questions about Colorado’s second and third season hunts or their new five-year structure, give us a call. Good luck this season!