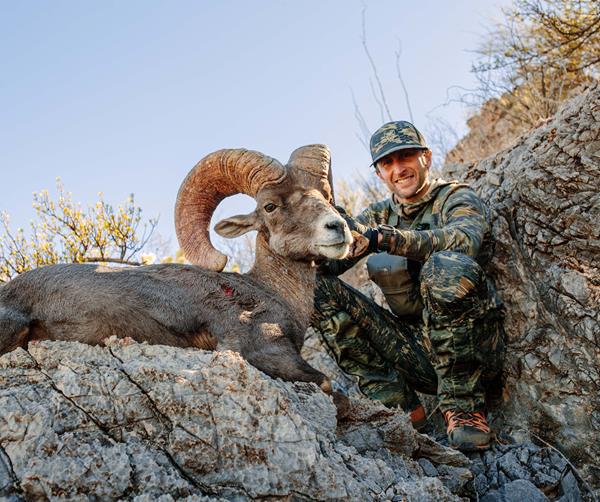 Sonora, Mexico is a land like no other. With Baja to its northwest, the Sea of Cortez to the west, and Sinaloa to the south, the Desert State is a hunter’s paradise. Massive saguaro cacti dominate the landscape in every direction. They’re so vast and towering that you feel like you’re roaming around in a Super Mario game. It’s rich in Desert bighorn sheep and legendary mule deer. The air is calm, the sun is warm, and the sunsets are magical. Sheep roam the peaks in every direction, and mule deer dominate everything in between. The mornings are cold and the nights are colder, but the days are warm! The tortoise, frozen dead in his tracks, was a humbling reminder about the harsh life in desert environments that endure massive temperature swings.

The Desert sheep disappear in the vegetation. It took me a couple of days for my eyes to adjust and settle into the glass. We covered a lot of ground early in the week, but we couldn't locate a shooter ram. We saw plenty of sheep but nothing mature, so we called in reinforcements to give us extra eyes and glass.

After a morning of glassing multiple peaks unsuccessfully, we decided to venture further into the mountain range to check remote drainages. As the truck slowly made its way up and around a mountain pass, a hammer Coues deer jumped up with his doe. Now, for an Arkansas guy who grew up hunting small whitetail on public ground, Coues was not a species that had ever been high on my list. I'd never hunted these tiny deer, but this deer was a shooter. Marti`n looked at me and said, “You must try and take this deer.” We dismounted the truck, and I chambered a round. The buck was running straight up the hill at 220 yards. By the time I got situated with a steady rest, I completely lost his location. Without any prominent landmarks on the hillside, the guys did their best to talk me onto target. I felt the stress of locating a deer on the side of the mountain that all looked identical complicated by language barriers.

I could not locate the buck in the scope, so I grid searched the hillside by starting at the top and working my way down. I located a large saguaro cactus at the top of the mountain to give the team behind me a landmark. To my surprise, at the base of the cactus stood a Desert bighorn staring back at me in the scope.

I said, “No, there is a ram at the base of the cactus, staring at me.”

That put the team into full scramble. Spotting scopes were being ripped out of the truck at lightning speed. It looked like a NASCAR pit crew trying to get their driver back on the track.

Martin said, “Ram, ram. You must shoot the ram.”

That was all I needed to hear. The shot would be straight uphill at 420 yards. I had a steady rest, but I needed him to turn broadside. Mexican fortune on my side, he turned perfectly broadside. I squeezed the trigger, sending a Barnes Vor-TX .300 Win Mag directly into his shoulder. I couldn't believe it, and the team erupted in excitement. I had just taken my first Desert bighorn sheep while trying to shoot a Coues deer. The guys were even more excited that we evaded the six-mile hike that was about to commence through the cactus and lava rock that dominated the vertical peaks.

The ram was beautiful. He was a mature double broomed Sonoran bighorn that spent his days living in this harsh terrain. It’s amazing that such small- bodied animals can carry around so much headgear.

As we arrived back at camp, Edgar had cold margaritas waiting for us while a pig cooked on the open coals. As the sun set, the fire burned and the music played while we ate roasted pork tacos and sipped on the best margaritas I’ve ever tasted.

With the ram in the salt, it was time to focus on our second goal. I had a mule deer tag, and the rut was in full swing. The bucks were chasing hard, so I wanted to be somewhat selective. New deer were showing up every day. There was plenty of time and no reason to rush. We passed several good deer over the next two days. Some might need another year, some were broken, and some I just didn't like. I love kickers, and I love big mainframe typicals with character. Over dinner and Tecate Lights, we planned to head west towards the Sea of Cortez. Some of the other guys in camp had tagged out, leaving us a tremendous hunting area to ourselves.

After passing a few good deer, we came over a hill in the top drive and a beautiful chocolate-horned muley stood near his doe. He was in full rut, and he wasn’t leaving her side. He had a kicker off his right G3 that I noticed immediately. As the old saying goes, kickers get you killed! There was no hesitation as I lowered the rifle. He was a beautiful old deer. As I looked at him in the scope, he was blind in his left eye and blood ran from it down his nose and onto the desert floor. These deer fight viciously during the rut and many lose eyes from horns and cactus. They don’t care about their surroundings and the thorns that cover this landscape when they’re locked in combat.

The shot wasn’t difficult, and he dropped in his tracks. I was overcome with joy as I placed my hands around my first mule deer. Whitetail hunting has always been my passion. I’ve spent thousands of hours in the woods hunting them, and I’ve always dreamed of hunting mule deer. To be able to hunt them in Old Mexico made it even more memorable. Mule deer and Sonora seem to be synonymous.

We loaded the deer in the CJ7 and ventured away from the sea back to camp. The margaritas flowed, and the band played on. Mexican hospitality is unmatched, and I will forever be thankful for the friendships we made with our Mexican guides and staff. We all have a passion for the outdoors, adventure, and hunting. We’re all the same family although we might speak a different language. Fortunately, as hunters, we find ways to adapt and communicate with each other. We overcome adversity that others might find cumbersome.

As the team returned home, we cooked ribeye tacos and mixed margaritas in honor of our friends south of the border. Until next time, I'll dream of margaritas, mule deer, Desert bighorns, and my new friends in Sonora,
Mexico!