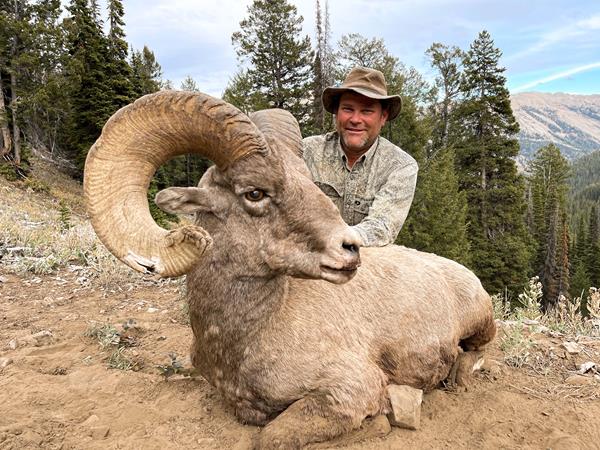 “How soon can you get here?” The question was from Dustin Childs owner of Trophy Mountain Outfitters. His team had located a legendary ram they called “Watoosee” that, once again, was able to avoid a hunter’s bullet. This particular ram had been hunted for several years previously but was always able to survive even as other rams in his band were taken by hunters. Then he disappeared for three years, and it was assumed he had died on the winter range given his advanced age. Fast forward to 2021 and he was back in his home basin. Fortunately, the sheep hunter before me had taken a different ram out of the band prior to Watoosee showing himself.

My quest began in 1999 when I first applied for the sheep draw. In the 22 years since then, I had become accustomed to the annual “UNSUCCESSFUL” message and the ever-increasing cost of the tag and preference point. Before the 2021 application, I called the Huntin’ Fool Team and asked for their recommendation between my top two choices. They recommended unit 7, and I was ecstatic when I drew the tag. Another call to Huntin’ Fool about potential outfitters led to Trophy Mountain Outfitters, and one call with Dustin sealed the deal. It was apparent from our first conversation that he suffers from “sheep fever” just like me.

My hunt was scheduled to begin in early October, so I was surprised when Dustin called on September 22nd. After the call, I spent the rest of the evening clearing my schedule and was on the road the next morning. Twenty-nine hours later, I was on the trail, riding into the Gros Ventre Wilderness. My guides were Nathan Shuter, Hayes Childs, and Landon Cornia. On the first day of hunting, we slipped into Watoosee’s basin at dawn. We spent all day picking it and neighboring basins apart but to no avail. The second day began the same way until we received a call that some elk hunters had bumped into Watoosee’s band of rams in the dark timber. We adjusted our approach, and while we found sheep in the timber, we could not find Watoosee. Now I was getting into a schedule bind for another hunt in Idaho, so we rode out on day three to give the rams some time to settle into a more normal routine and me time to complete my hunt in Idaho.

On October 1st, I was back on the trail into the Wyoming wilderness. Watoosee had been spotted in his home basin one time while I was gone. No rams were spotted on my first day back. On the second day back, we were in the same basin for a long day of glassing. In the late afternoon, we spotted a band of four rams in the trees. We felt Watoosee had to be in there, but after watching them until dark, we became convinced this was not the band of rams we were looking for. Things changed the next day when we finally spotted Watoosee’s band of rams in the late afternoon. The issue was that the band had relocated to a timbered ridge a mile away from his home basin. We had no choice but to put them to bed and then make a plan to relocate in the morning.

Early the next morning, we rode our horses as close as we dared, tied up, and began climbing. In the pre-dawn gray, we spotted the band of rams above us. Evidently, they had fed out into the yellow grass at night and were now working their way back to the timber. We waited until the thermals switched and began slowy working our way into the timber after them. Because of their location, we could not close the distance, so we waited until 4 p.m. and then moved onto a bench where we expected them to feed. We lay there patiently until dark as five of the seven rams fed onto the bench. Watoosee was not among them. By now, the pressure was intense due to a significant storm expected in the next two days and the risk of bumping the rams in the timber and not being able to relocate them before they began their trek to the winter range.

Our plan for the next day was similar – get as close as possible to the rams in the timber without bumping them and wait for them to make a mistake. At about 4:30 in the afternoon, the rams were up and feeding. Nate and I moved as close as possible, and before we knew it, Watoosee walked out of the timber in range. Now the pressure from 22 years of applying for the tag, a pending storm, a legendary ram, two days of waiting within a thousand yards of the ram, a poor choice for a rifle rest, a hard quartering away shot, and sheep fever all came together and I pulled the trigger.

I could not believe I had missed a shot this important, but I chambered another round as we ran to the edge of the bench Watoosee had been on. As soon as we arrived at the edge, I had an offhand shot at the running ram and shot right over his back. We took off again down another bench and ran to the edge. As we peered over the ledge, Watoosee had slowed to a walk below us. I took a knee, and the third shot was the charm with Watoosee collapsing within 20 yards of the bed he had been laying in the past two days.

When we reached the ram, it was obvious where the first round went. I had indeed pulled the shot and hit his right horn. This may explain why he quickly slowed to a walk when the other six rams never stopped running. Regardless, I had my long- awaited Wyoming bighorn and Trophy Mountain Outfitters could celebrate the taking of a local legend. Watoosee turned out to be an ancient ram. His growth rings were stacked together very tightly and the wear on his horns made aging him a challenge, but the consensus was 14.5 years old. His teeth were in terrible condition, and we all questioned whether this impacted his strange feeding habits and whether he could have survived another Wyoming winter.

We were able to break down Watoosee by the time it got dark and then hiked out to the horses. We were all on a high as we rode back to camp in the nighttime beauty of the Wyoming wilderness. Special thanks go out to the Hunt Advisors at Huntin’ Fool, Dustin Childs, and the Trophy Mountain Outfitters crew of Nate Shuter, Hayes Childs, and Landon Cornia.