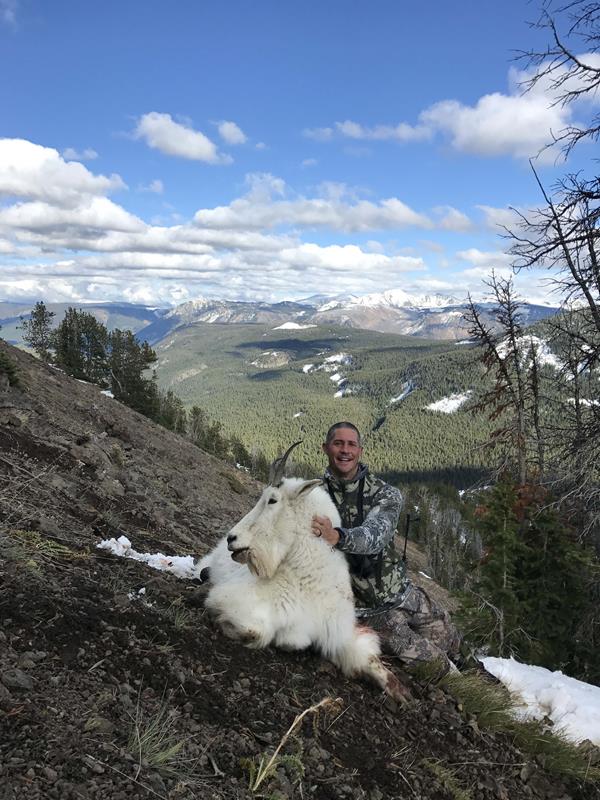 Many don’t know that I carry a camo bandana with Psalms 91 on it to every hunt. To me, this verse is humbling, reminding me that no matter the training, skills, or risks taken afield, hunting the wilderness is often out of our control. Yet with faith, you will persevere.

As I spent the last year preparing, training, and studying for a selfguided over-the-counter elk hunt in Colorado, little did I know I would draw a goat tag in Montana. Therefore, my western hunting obsession grew. Hours of hunting podcasts, weighted stair climbers, weekend hikes, and gear lists consumed my time, and it was worth every bit of it.

In August, my hunting buddy, my father, and I headed to Montana to scout. Studying maps and covering ground, we found goats at a distance but remained undecided on where to focus our attention come hunting season. By chance, we passed a group of horseback riders from Hawley Mountain Guest Ranch whom we later partnered with.

October came, and it was time to embark on the hunt-ofa- lifetime. The Hawley Mountain crew, despite not guiding since 2007, quickly earned our trust by providing horseback, hearty meals, and endless knowledge of the area. Now the hunting began.

On day one, it was in the 20s at night and mid 30s during the day. We traveled the 10 miles to camp and prepared for the week by cutting firewood, setting up tents, and securing the horses. We headed out to spot from a canyon in the evening without success.

Chad, my guide, and I hiked to the top of a mountain in kneedeep snow on day two. As we peeked over the top, the clouds rolled in. The cold forced us to make a fire to stay warm. Our view was limited, and ultimately, no goats were spotted.

Our plan on day three was to go to a new area and spike camp for the night if we did not have any luck. Despite a clear day and a lot of area to view, we did not spot any goats. Staying at a high elevation for the night, we were limited in water and survived off of snow, Mountain House meals, and determination.

On day four, we went to a new vantage point, around 11,000 feet of elevation, fighting deep snow the whole way. With a clear day, the new view was promising. Despite a lot of time spent behind glass, no goats were spotted. That evening, clouds rolled in with more snow. With not one goat spotted in four days, it was a depressing trip back to base camp. Upon returning to camp, Dad reported that he had spotted a goat from base camp. Excited, I was unfortunately deflated when we realized the goat was on a peak not even the 73-year-old lifelong resident of the unit, outfitter Ron Jarrett, had climbed before. With snow, steep slopes, and the unknown, we decided against the dangerous mountain and planned to take horses to a new area for day five.

The next day, we woke up and the horses had broken free and made their way back to the ranch 10 miles away! What were we going to do? Psalms 91:1-2 says, “He that dwelleth in the secret place of the Most High shall abide under the shadow of the Almighty. I will say of the Lord, He is my refuge and my fortress; My God, in whom I trust.” In the back of my mind, I had a feeling something was in store for today. Why else would the horses have left? The decision was made to challenge the steep slope and snow. We loaded packs, preparing for the worst but trying to remain as lightweight as possible, and embarked to the unknown.

Five hours later, climbing rocks I would not climb again, we summited the point where my dad had spotted the goats the day before. Immediately, I spotted five goats 400 yards away that deserved a closer look. Working to get above them, we tried to circle around, only to be blocked by a small family of three more goats that needed more time to grow. We then tried to squeeze our way between the two groups, risking our wind spooking the family of three as the thermals rose in their direction. Needless to say, Chad and I came upon an opening we could not cross without being detected. We debated just pushing the family of three and trying to intersect the others or just waiting it out. At that moment, Chad looked up and spotted two mature goats 200 yards away.

I immediately dropped to a prone position to get a closer look through my scope. Judging one of the goats with horns twice the length of its ears, I was confident it was one worth taking. Prone on the snow, ready for the shot, I started to slip down the mountain. Repositioning, I was able to settle and fire a clean shot. About 50 yards later and with a second security round, the goat fell in a perfect place. I cannot describe the excitement of this moment!

Upon recovering the 9" goat, skinning, and caping, Chad and I embarked on our trek home. This trek would prove dangerous and was about 15 minutes short of darkness that would have forced us to stay on the mountain for the night. We returned to base camp six miles later.

This trip was truly a challenge, both physically and emotionally, but as my dad always says, “The stars aligned.” It was truly special for my dad to play a role in spotting the goats from base camp. A special thanks to Chad, who toughed out wet feet, steep mountains, and lived off snow with me. Furthermore, I appreciate the first-class Hawley Mountain crew, Ron, Eric, and the others, who played a role in the hunt. We’ve made friends for life. Robert from Huntin’ Fool was also a great resource on recommending areas to hunt and knowledge of the area. Finally, as a newlywed, a big thanks to my wife who puts up with my obsession and supports me along the way.