The After Work Bull 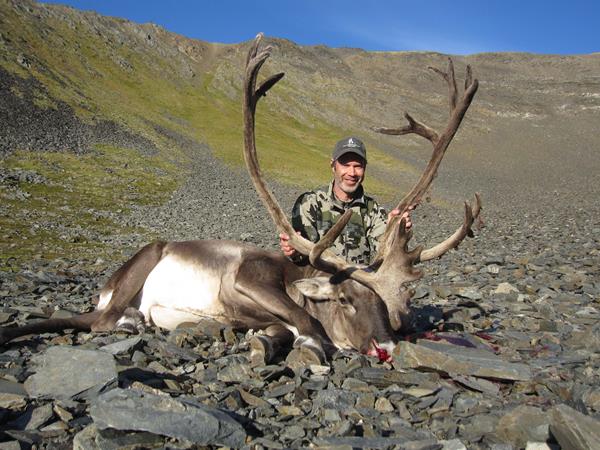 Since I live in Hope, Alaska, I quality as a rural resident and a federal subsistence permit allows me to hunt the Kenai Mountains caribou herd every year. This permit is identical to and concurrent with Alaska state draw tag DC001, which Huntin’ Fool profiles yearly. At just a few hundred animals, the herd is small and the terrain they inhabit is very rough. The difficulties of the hunt are compounded by a very limited amount of road access. However, I have learned that with a bit of effort, caribou can be located. The challenging nature of this hunt can be illustrated by this fact – in 2018, I was the only federal subsistence hunter to kill a caribou from this herd.

In between hunts, I find myself at work. It’s an all too common syndrome with many hunters, and unfortunately, most of us cannot figure out a way around it. Tuesday, August 28th, was a workday. I work construction, and the job that day was installing a metal roof. The weather was beautiful, and I frequently found myself gazing up at the tundra-covered ridges above town. I even found a few minutes now and then to do some glassing from the work site. We finished the job at about 3:00 p.m. and called it a day.

The middle of the afternoon in Alaska in August means eight more hours of good light. Even after that, it’s not too hard to see most of the night. I quickly changed clothes, grabbed my gear, and drove to my target drainage. I was hiking by 5:00 p.m., and about an hour later, I was out of the brush and into the tundra. Fresh caribou sign was abundant, so I glassed as I continued up the mountain. Just after 7:00 p.m., I was working my way up into the last basin before the headwall to the summit.

After seeing caribou sign for the last hour, I was not all that surprised to find a lone bull in the summit amphitheater. My rangefinder read 254 yards, but I saw that I could get a bit closer using boulders and a small draw as cover. At 132 yards, I set up prone over my pack and killed him instantly with a high shoulder shot from my Kimber .300 Win Mag.

I was delighted to see he was a large-bodied bull in prime condition. As a bonus, he also carried a decent set of antlers. After saying a prayer of thanks and punching my tag, I had a quick photo session and broke the bull down so the meat could cool overnight. Taking just my gear and about 20 pounds of meat, I reached the road in an hour and was home by midnight. During my 30+years living in Alaska, I’ve undertaken many successful caribou hunts, but this one was perhaps the most unique. It was certainly the most expeditious.

Although my lovely wife, Gyongyi, was not with me when I killed the bull, she was a big help packing out the remaining meat and antlers. Her assistance saved me much hard work and I owe her many thanks, not only for helping with this bull, but for supporting all my hunting endeavors.