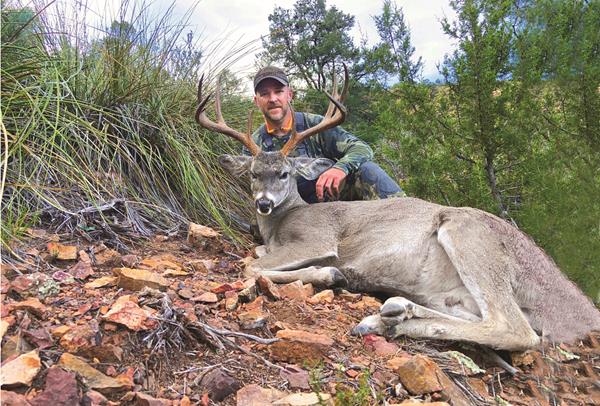 “Never give up.” This phrase is one hunters, especially Coues deer hunters, have probably told themselves or been told more than once. These were the words my brother, Darr, was telling me when I was facing stacking demands at work, kids’ sports activities, and my concerns that I may not have time to go on my October Coues deer hunt. Like the fantastic support he has always been, he helped me with rifle loads for my new 6.5 PRC Arrowhead Rifle and gave me a pep talk to get me pumped up to spend whatever time I could in the field. I had a personal goal of harvesting a Coues deer over 100" the last three years and had eaten tag soup waiting for the right deer (never give up).

I had been targeting a specific buck the last two years. The focus on this buck started back in 2019 when hunting this same country with my brother-in-law, Rylan Creedon. I found a match set of the buck’s sheds. They had a broken G2 on his left side and his eyeguard, and the G4 was chewed on his right side. The sheds were from the 2018 season and scored around 108-110". I had my sights set on locating this buck since I had picked up his sheds. Besides one encounter where we thought we jumped him in 2019, the buck had not been seen.

Fast forward to 2021. I shifted strategies (never give up) and applied for the first rifle hunt in the unit instead of the later November hunt we typically hunted. I wanted to be the first group of rifle hunters in the unit and hoped this would result in the best chance to locate this buck when he was still in his normal behavior before he was heavily pressured. With schedules and conflicts, I would be solo on this hunt.

The day before the hunt, I drove to the unit and loaded my Honda Pioneer with a backpack-style camp. I drove into a campsite we had camped in the year prior and had enough time to glass Thursday evening. I only turned up a few small bucks and does but was excited to be out in the field and optimistic of what opening day would bring. The great news was that there weren’t any other hunters in this spot Thursday night. This all changed when I woke up early Friday morning after a typical restless night prior to opening day.

After some instant coffee and a light breakfast, I headed to my vantage point to glass. As I was getting ready to hike in under a full moon, I noticed the headlights from another side-by-side coming my way. These hunters were also going to be in the same country, and come to find out later, they had been after the same buck. I told myself to never give up, find a way to make it work, and make the best of it. I spent until noon glassing on this point with only a handful of deer seen, including four small bucks. I decided to move locations (never give up) and position myself over a shaded basin near where I had found the buck’s sheds two years before. I kept glassing ruthlessly into the thick drainages and basin, and at around 3:30 p.m., I glassed up a bedded buck 245 yards from me in the shade of a steep, thick hillside. All I could see were the G2 and G3 on his right side, but one look through the Swarovski spotting scope told me this was big buck and shooter.

Since the buck was bedded and relaxed, I got the Phone Skope set up and started the video. After dialing in my scope, I got a solid rest for the Arrowhead 6.5 PRC, and as I readied for the shot, the buck stood up. I only had a small window about half the buck’s body length to shoot through, and as soon as his shoulder cleared the opening, the 6.5 PRC echoed through the canyon. I could see the buck was down, and I had captured it all on video. I was in disbelief!

After the initial shock wore off, I packed up my gear and headed around the basin to get to the buck. I had only seen the frame of him when he was bedded, and when he stood up, I was so focused on the shot placement that I didn’t really know how big of a buck he was. When I walked up to him, he continued to grow. I was in pure amazement at how big this buck’s frame was. He was a wide typical 4x4 with a kicker off his G2 on the left and a kicker between his G2 and G3 on his right. After taking a solo video recap and some pictures, I got to work taking care of the buck and packing him out of the canyon in one trip. I made it to the top of the mountain just in time to get some silhouette pictures against the sunset. I also called my wife and boys to share the great news.

After getting the meat on ice, I built a fire while I made a dehydrated meal dinner. It was a quiet night in camp being solo, but I could not help but continue to stare and appreciate this magnificent deer with his antlers silhouetted against the fire and full moon. When I got home, I realized this was the same buck from the sheds I had found two years before. Looking at onXmaps, I had harvested my buck only 150 yards from where I had found his sheds in 2019. To further the story, I went back with my sons, Tanner and Austin, after the hunt and pulled trail cameras I had not checked in over a year. I found I had one set of pictures of my buck in velvet in August of 2021!

The history and time spent looking for this buck made me appreciate it so much more. It’s bittersweet that it’s over. After the 60-day drying period, the buck officially gross scored 132" SCI as a non- typical and 128 2/8" as a typical. The buck will net over 120" as a typical. He had over 19" main beams, just under 30" inches of mass, and an inside spread over 18". While I may have been solo on this hunt, there are so many people who have supported me to fuel this passion, build my skills, and helped me, including my brother Darr, Luke Horak of Arrowhead Rifles, and of course, my wife, Krystal, who supports my addiction. Needless to say, she wasn’t as impressed with the buck-of-a-lifetime for our 15-year wedding anniversary the following week as I was.

I thank God for his grace and blessing to allow us to pursue and harvest such a magnificent animal. While this hunt may have ended in one day, the preparation and groundwork had been built over years of getting to know the unit, patterning deer behaviors, building shooting skills, and improving glassing techniques. To me, this was so much more than harvesting a giant Coues deer. It represents achieving a personal goal, appreciating and honoring this magnificent animal, and passing down the passion and work ethic to my kids. Remember, never give up, hard work pays off, and focus on the variables you can control. If you remain positive, work hard, and keep hunting, success is inevitable!