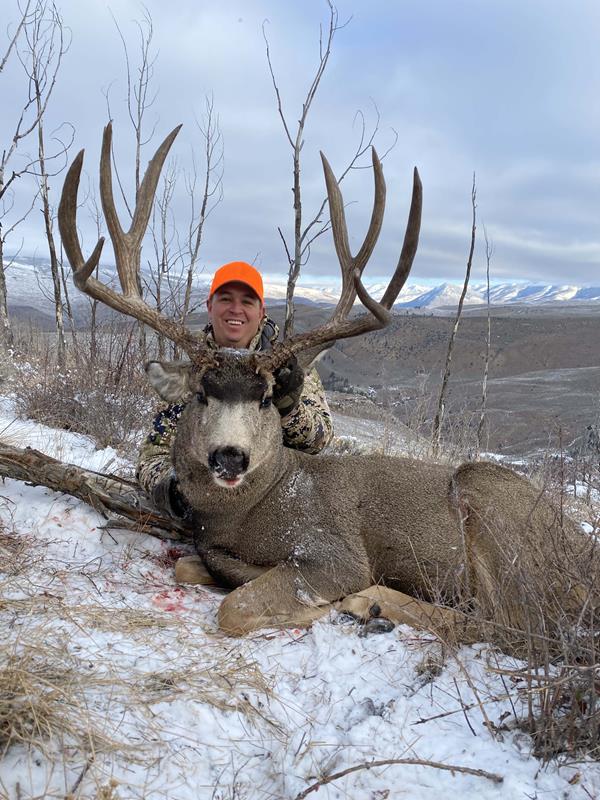 My heart was racing and my Iowa lungs gasped for air as I dropped to one knee. There he was! I told myself to settle down as this was going to be the opportunity I’d been waiting 13 years for.

Growing up in Iowa, hunting ring-necked pheasants and chasing whitetail deer was about the extent of my hunting expertise. Many years ago, I stumbled upon a publication that gave me the confidence and knowledge to expand my passion to experience life adventures. You might have guessed it, for it was the Huntin’ Fool magazine. After getting acquainted with all the states and now armed with the knowhow of applying, my journey began just like everyone else and I began building points across the West.

With all the great species we have the honor to chase across the country, I have always been enamored with giant mulies. I began years ago with a plan to build points across many states, but I had always had my eye on Colorado, specifically the Gunnison basin. Gunnison’s genetic history of producing monster bucks as well as the beautiful mountainous terrain have always captivated me. In my mind, this has always been the stage where that perfect hunting adventure would take place. With Colorado’s preference point system, I knew if I stayed patient and continued the course, I would be chasing mulies in Gunnison someday.

If 2020 couldn’t be any more unpredictable, I drew a third season rifle tag in unit 55 Colorado. I felt like I had just hit the lottery. Being somewhat of an old vet now and reading Huntin’ Fool for the past 15 years, I knew my point total going into the draw wasn’t high enough to guarantee a tag. Now, after years of applying, reading countless stories, and looking at other hunters’ photos every year, I was finally about to embark on my own mulie adventure.
After receiving the news, the first thing I did was pick up the phone and call Huntin’ Fool. Since I honestly wasn’t expecting to draw this year, several things were racing through my head. Was I going to have time to scout? Would any of my friends be able to assist? Should I go guided or self-guided? I pondered for days, and after consulting with Huntin’ Fool and getting a recommended list of outfitters for my unit, I decided that I was going to give myself every opportunity to make this experience something to remember. I made several phone calls, and one outfitter stood out from the rest. I booked a hunt with Steven Guerrieri and Lazy F Bar Outfitters, and you better believe I’m glad I did!

Now that I had my tag, an outfitter booked, and a planned date to start hunting, every day thereafter was filled with anticipation and planning. I found myself researching the unit and scouring internet forums. Like many of us, I found all the latest gear and upgrades to my current stuff I just couldn’t live without. I even talked myself into building a new 6.5 PRC deer rifle. I had a plan for when the wife asked me, “Where did that gun come from?” I planned to provide the response I always receive when asking that question, “Oh, this old thing? I’ve had it forever.” I also spent days and weeks target practicing at varying distances and holds. I will be the first one to raise my hand and state I hate running, but I spent months working out and trying to improve my fitness level. I was just overly excited and filled with mule deer fever. I couldn’t wait for the day to arrive and be chasing Gunnison basin brutes.

With the truck packed and being filled with excitement, we hit the road on Thursday for my planned hunt to begin on Saturday. I was lucky enough to have two of my best friends share this experience with me. Tagging along were my childhood friend, Daniel, and brother-in-law, Daren. We arrived in Gunnison on Thursday night. The plan was to get to town a day early so we could meet our guide, shoot my gun again, and then glass Friday night. The next day, I met my guide, Brad, and he was generous enough to take me to his own ranch where I could do some practice shooting. After meeting Brad, looking at some scouting photos, hearing stories, and having some laughs together, we couldn’t wait for the hunt to start. It was a beautiful evening that night as we went out glassing. Thankfully, a cold front was about to come in.

The next morning did finally come, and we were hunting. Even though I had already been out west hunting other species by now, it still amazes me every time I get to, and unit 55 in Colorado didn’t disappoint. Over the course of the next five days, Brad had us glassing all sorts of country. We glassed up deer all day long it seemed, and the views were breathtaking. We found a few good bucks bedded from time to time, but they weren’t quite what we were looking for. At times when we stopped to glass, I just imagined this was going to be it. I knew we were about to glass up Mr. Big and put on the picture-perfect TV stalk and harvest the mature mulie. It was just a matter of time.

We did go on a few hikes from time to time. On one of those hikes, we were walking through a think patch of aspen quakes and jumped two bucks. I saw them first at our 9:00 and knew the back buck looked big. I whistled at Brad to get his attention, and once he got eyes on them, he immediately whispered, “Shoot the back buck!” I knew right away he must be bigger than I thought with the way Brad reacted. I immediately found a tree to set up on to brace myself for a shot. Even though the bucks did stop as they weren’t spooked, the quakes were so thick I couldn’t find a shot. We pursued them straight up the mountain but never got back on him. I started to wonder if that was going to be my opportunity and it just didn’t work out.

Wednesday morning, we went out to a new spot and started to glass. It was cold that morning, around zero degrees, but extremely calm. We had deer spotted everywhere far out on ridges in almost every direction. Daren spotted a few bucks off in the distance and waved Brad over. As those two went over the ridge to get a closer look, Dan and I had a few bucks of our own we had glassed up and were watching. Once Brad and Daren returned some time later, Brad stated he wanted to move south to get a different vantage point on a deer he saw traveling. We packed up and hiked back to the jeep and started back down the trail. We hadn’t gone far before off in the distance there he was, Mr. Big. It didn’t take any of us long to know that was our deer. Brad and I agreed we needed to move fast and cover ground if we were to pull this off as the buck was traveling fast. We covered about 500 yards as fast as we could and got into position. I dropped to one knee and was staring at a buck-of-a- lifetime as he stared back at me through my reticle. It was only about a 200-yard shot, but the way I was holding my crosshairs it looked like it was a thousand. My adrenaline was sky high, my heartbeat was racing, and my lungs were trying to recover from the mad dash. It was now or never, and I settled in on his shoulder. I pulled the trigger, and he went down right where he stood. I jumped up and hollered with excitement while just about knocking over Brad with a hug in the process.

Hunting is more than the pursuit and fair chase of harvesting wild game. Don’t get me wrong, the final climatic ending that bags an animal is only a feeling that can be felt and not expressed. Hunting is about the adventure it takes you on and the places it takes you to. But most importantly, it’s about time shared with old and new friends alike. That was my Gunnison dream hunt.