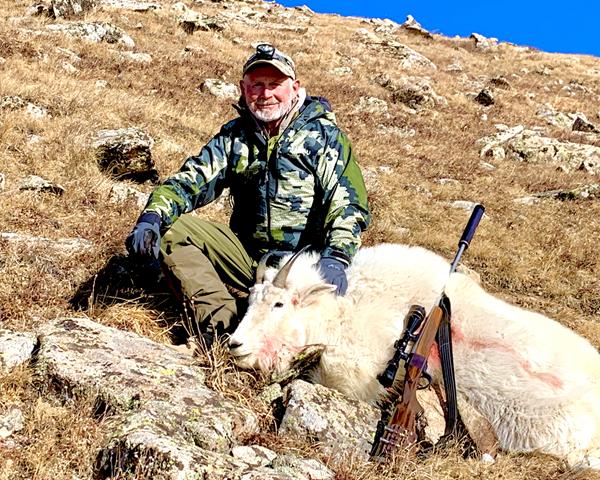 It all began in the spring of 2019 when a veterinary school classmate, Bill Ormsbee, called. I hadn’t seen him for approximately 20 years. He had recently been drawn for a Colorado mountain goat hunt and was wondering if I would like to go on the hunt with him. My immediate response was, “Heck yeah!” We were fortunate to harvest a goat on the first day, earning it after climbing two separate mountains with a combined elevation gain of over 8,000 feet.

In the spring of 2020, I was totally surprised to receive a notification that I had been drawn for a goat tag the last season in unit G7. With only 8 preference points, this was like winning the lottery. I called Bill, who was very excited for me to have been drawn, but he declined going on the hunt with me because he had been drawn for antelope in Wyoming and would not have time to do the necessary preparation to physically perform the hunt. Now the hunt was on for someone to go with me. Harvesting a mountain goat on the top of a mountain and getting it off is not a job for one person. Fortunately, I met a new neighbor at a dinner party. Josh Wingfield was 40 years old, 6'4", and a newly retired army special forces Green Beret. I mentioned to him I had been drawn for mountain goat, and he excitedly volunteered to go along and help. I immediately accepted him into the position of Sherpa for my trip.

I made a trip up to scout about 10 days prior to the opening of the season. Arriving at the trailhead, I started up Peru Creek Road. The trail ends about two miles in and a foot trail continues up to Chihuahua Lake. As I was turning around at the end of the road, I spotted my first goats. There were two on the west side of Gray’s Peak. After close observation with my spotting scope, I decided it was a pair of billies. They were on a steep slope above a 500- foot rock cliff. Any approach attempt would be extremely difficult, and if a billy was shot, there would be a chance it would roll off the cliff. No other goats were glassed on the way out.

Two days prior to opening day, I loaded up my truck with all my camping gear and Josh and I headed up early to set up camp in a nice area on Peru Creek. After setting up the tent, we headed out to glass. The Chihuahua Gulch trailhead was only a couple hundred yards east of our campsite, so we headed that way, glassing as we traveled north. We spotted two goats on the west side of Torrey’s Peak, but they were in an area that would not be accessible for hunting and harvesting. At the end of the road, we spotted two goats on the west side of Grizzly Peak at the far north end of the drainage. Again, it was not really accessible to hunting. We then drove back to Peru Creek Road and headed east. We spotted two goats, and both appeared to be billies in a bowl below the crest between Ruby’s Mountain and Cooper’s Mountain. Proceeding to the end of Peru Creek Road, we spotted another pair of billies on the west side of Argentine Pass. We headed back to camp feeling confident about our prospects for opening day.

Opening morning, we were on the trail going up into Horseshoe before daylight, waiting for it to get light enough to glass. When we were able to start glassing, we found some nannies. They were in the general area where the two billies had been the previous evening. We eventually found the billies much higher up the mountain as they came out of a canyon going up toward Argentine Pass Trail. I immediately started up the trail in an attempt to cut them off. Josh stayed below to keep an eye on them. After climbing over two miles, I just missed them. Josh said I was about 10 minutes too late. I then worked my way up the trail until I was about 200 yards above the group of nannies. One of the two unknown goats came out of a small draw and laid down near the two nannies and their kids. It was definitely a nanny. I had an either-sex tag but wanted to hold out for a billy. I worked my way back down to Josh and we went back to base camp for lunch and a nap.

That afternoon, we were on one of the mine platforms up Cinnamon Gulch Road glassing across to Ruby and Cooper. We found the two billies we had seen in that area over the past two days. Not having enough time to make the approach and get off safely before dark, we elected to save their stalk until the following morning.
At daybreak the following morning, we were on the mine platform. We spotted the billies about 400 yards down the ridge to the west of where we had left them the night before. We drove to a point on the road we had glassed as one of the most accessible routes to the top of Cooper Mountain. We worked our way up at a steady pace with the plan of coming out above the goats and working our way down to them. I spotted one of the billies approximately 200 yards down the ridge on the crest just south of us. I signaled to Josh that I had seen a goat and began to work my way up to it. The billy looked our way, but we remained frozen and he put his head down and fed up the crest. I turned my scope power down from 10 to 3 and readied my arm in the sling of my rifle for an off-hand shot. I steadied myself and squeezed the trigger. The billy immediately dropped and rolled 15-20 yards. A high chest shot had broken his spine. He tried to rise and rolled another 20-30 yards down the slope. As he tried to rise again, not wanting him to roll to the point he would hit the steeper section of the slope, I placed a second shot which anchored him.

This was one of the most exciting and rewarding moments of my hunting life. At 67 years of age, I consider myself blessed to be able to physically perform such a task. I have been fortunate to have experienced many exciting hunting adventures during my life, and this experience will definitely rate near the top. Having my Golden Sherpa, Josh, with me on this trip-of-a-lifetime was a true blessing. We formed a bond which will never be forgotten.