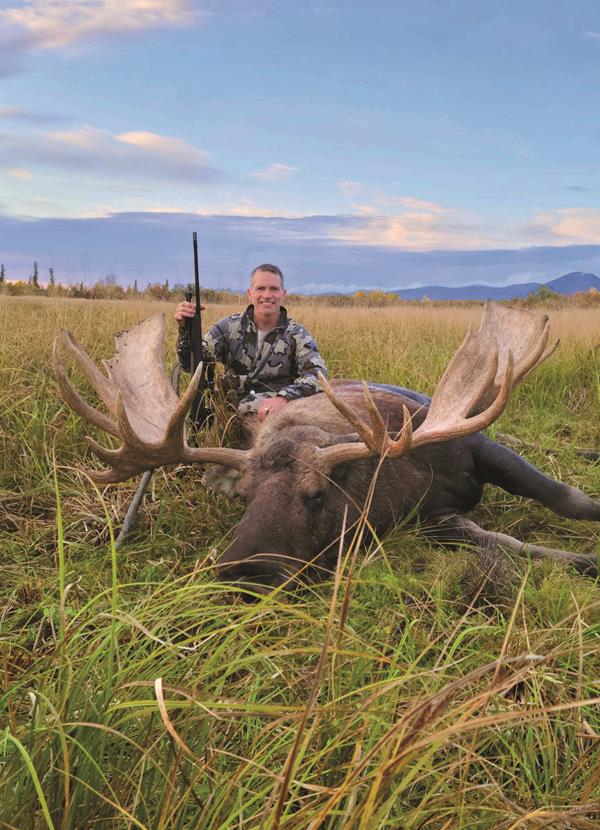 If you are going to hunt moose anywhere, especially in Alaska, there is one question you must answer before pulling the trigger, “Where is it going to fall?” As a new hunter in New York chasing whitetails during college, that question never entered my mind. After I retired from the Army and settled out west, it crossed my mind once or twice, but I never dwelled on it. Where I hunted mule deer and elk in Colorado and South Dakota, I had always been able to access my kills with a truck or ATV. However, hunting in Alaska for moose is a whole ‘nother ball game. An Alaska-Yukon bull moose is easily double the weight of a bull elk, so before you pull the trigger in the Alaskan backcountry and it’s just you and your guide, ask yourself that critical question, “Where is it going to fall?”

Hunting and harvesting an Alaska-Yukon moose was on my bucket list, and with the encouragement of two friends who had both harvested 60"+ moose with Hunt Alaska, I booked a hunt for 2020. Unfortunately, that hunt was cancelled three days out due to Covid. The local village would not allow any outsiders in and wouldn’t even allow the outfitter, Virgil Umphenour, a longtime friend of the tribe, into the village to buy gas, which is the lifeblood of these river-based hunts. Therefore, everything got pushed to 2021.

With Virgil’s help, I was lucky enough to draw a one of one tag for hunt DM 823, which includes units 21CS and 24CD within the Koyukuk controlled use area upstream from Gisasa River. That is still a huge area, but the key is the “controlled use area,” which made me the only non-native hunter in the area. We hunted upriver about 45 miles from the village of Huslia. I only knew where it was because my wife, Christine, is an avid watcher of the National Geographic show “Life Below Zero.” As an aside, I met one of its main characters, Ricko DeWilde, who posed for a picture like we were old friends. We stayed in comfortable canvas tents and used Allweld boats to move up and down the Koyukuk River to look for moose sign on the banks, and then we moved through the thick patches of willows near the bank to call for bull moose.

One of the strange things about moose camp is that no one is in a hurry to get going in the morning. I’d been in other elk or deer camps where everyone waited for a guide or motivated hunter to get up and get the stove and coffee going before venturing out of their sleeping bags, but this was different. No one got their gear on and headed for the boats until it was clearly daylight out. It’s obvious once you think about it, but after getting dressed, having some coffee, and pacing around until the sun broke over the horizon, I finally had to ask about what I thought of as a distinct lack of motivation to start hunting.

“It’s not safe in the water when it’s dark,” my guide told me. Then he related a story of how a local family heading back to the village after dark hit a bull moose that was swimming across the river and all seven family members died. There was also driftwood to contend with. After the explanation, I was no longer in a hurry to get going in the morning. Since the sun set after 9:30 p.m., we would have plenty of daylight to find a moose.

Alaska’s moose season typically runs September 1-20, and non- residents get to hunt one of two 10-day periods in that window. This year, it was either September 3-14 or 16-25. Some people say the latter half is better because it’s colder and the bulls are more likely to be in the height of the rut. My availability and Virgil’s recommendation led me to hunt the first season, and all things considered, I didn’t have any complaints. The temperatures ran from the mid-30s at night to mid-50s during the afternoon, and except for a near constant drizzle, that was fine weather to run up and down the river checking out spots where either my native guide, Alvin Attla, had harvested bulls before or where we saw fresh tracks of moose on the banks where they came to the river to drink. We did that for the first three days with nothing to show for it but a couple of brief bull sightings and no responses to our calling. Even with good gear, the chilling drizzle got old fast. After three and a half overcast days and a slow start to the rut, our luck changed and the clouds broke on the fourth afternoon.

That evening at about 7:30 p.m., we tied the boat on the bank at a spot we had already visited three times. Honestly, my hopes weren’t high that we would see anything, but I dutifully followed Alvin up the bank. We moved on a narrow game trail through a 50-yard-deep stand of willows, and we saw a cow almost immediately after we got into the long grass lake. We inched along the right side of the narrow meadow and spotted another cow about 280 yards away on the left side. We waited 20 minutes before Alvin started to grunt and rake the nearby willows. Immediately, we got a response from beyond the cow, and a few minutes later, a single paddle from a giant moose emerged from the willows about 400 yards out. After a few brief minutes, the bull closed to 333 yards and proceeded to tear apart a willow stand. Branches and leaves flew everywhere. He then “waddled,” as he was so big he dipped his head from side to side as he walked, another 120+ yards to get between the cow and us. Alvin whispered, “I think he’ll go 70 inches.” It didn’t really sink in. I just knew the bull I was looking at dwarfed the three bulls I had seen so far, and he was still at least 200 yards away.

I wanted to pull the trigger, but Alvin said he could call him in closer. “If not, we can come back early tomorrow when he is sleepy.” There was no way I was going to wait until tomorrow, but I let Alvin take the lead and continue to call. The moose slowly crossed the meadow, to get downwind of us I think, and then hung up about 125 yards out. I had my 30-year-old Weatherby MK V in Wby .300 Mag perched on a walking stick, ready for him to emerge from the willows, when suddenly Alvin cow called. I’m not criticizing his calling, but the moose surely didn’t appreciate it. He grunted loudly and retreated 50-60 yards. Luckily, he presented one last shot opportunity. The bull walked back across the meadow towards the cow, presenting a broadside shot at about 190 yards. Just as I was about to pull the trigger, Alvin blurted out, “Don’t shoot yet. Let him get to the yellow grass because he’s standing in water.”

About four steps later, he cleared the green grass. I aimed for the shoulder to anchor him in place. Boom! I chambered another round and got back on him just in time to witness him fall. Even though the 180 grain Accubond hit a little further back, it shattered a rib on both sides, sending parts of the jacket and bone splinters through both lungs and into his spine. The bull didn’t even take one more step, and he came to rest on dry ground. The bull measured 70.5" wide! Fifty inches or four brow tines is the legal minimum for a non-resident to take a bull moose. Alvin has been guiding for 21 years and shot countless moose himself, and he has only had one other client shoot one over 70".

After some quick pictures, we gutted the bull and covered him in willow branches. It took us almost eight hours the next day to break him down and pack the meat and antlers the 500 or so yards to the boat. After the second moose hunt was over, I talked to Virgil and he told me that in 34 years of guiding and outfitting, I was only his seventh hunter to take a bull over 70". I was truly blessed with an experience and trophy-of-a-lifetime. My only regret is that it all happened so fast that I didn’t take any pictures while he was alive.

I want to thank my family for putting up with my “hunting habit,” especially my wife who quietly resigns herself to becoming a “Hunting Widow” each fall.