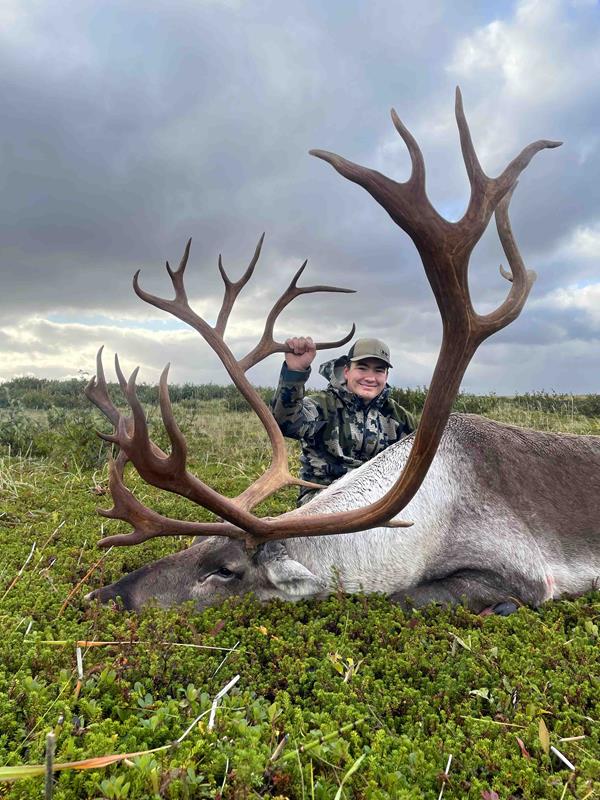 People love to travel to places they have never been. It brings a feeling of excitement to not know what lies before you. Some people don’t get many opportunities to travel, but I am fortunate enough to have those kinds of opportunities since my dad works for Huntin’ Fool. When my dad asked if I wanted to go to Alaska to hunt caribou, I couldn’t decline. I had always wanted to go to Alaska since I was a little boy, and being out there for two weeks in the middle of nowhere sounded so awesome. At 16 years old, I had never flown in an airplane before, and then I found out I was going to have to fly up there alone since my dad was going to be up there already guiding some clients before my hunt. It was a bit nerve-racking but almost peaceful to know that I didn’t have to worry about other people, just myself. It sure was a fun experience as I flew in four planes in two days and got to stay with my dad’s buddy, Justin Shaffer, in Anchorage.

I knew where we were going was remote. Cold Bay only has a population of about 50 people and very little business. The coolest part was being in camp as it was about an hour Super Cub flight from town. I have never really enjoyed crowded areas, theme parks, and conventions. I just dislike too many people with so much chaos that it takes away from the experience. Being nowhere near anyone else but the group was a very peaceful feeling and allowed me to enjoy the beauty of uninhabited land, holding only the sheer beauty the world has to offer.

After getting into camp, my dad, Jason, and I went on a hike to try and find some caribou. We ended up walking about six miles when we found a small herd of caribou bulls. One was big with crazy wide antlers. We set up, and Jason killed the bull with one well-placed shot. We were so far from camp and the daylight was fading fast, so we decided to take the bull apart but leave the meat, cape, and antlers until the next day. It was already well into the night by the time we finished and started the long hike back to camp. It was a very long walk that seemed to last forever, especially when we were crossing fresh brown bear tracks that were bigger than my size 11 boot tracks. We made it back to camp just after 2 a.m. Dawson, one of the other packers, had dinner ready as we arrived. I had a quick meal and then crashed in my sleeping bag.

The next day, Dwayne Magnusson, the outfitter, was able to fly his plane in and pick up the bull, saving us from the hike and allowing us to have a recovery day where we salted the hide and got all our stuff organized.

The following day, we hiked another five miles in the opposite direction to find a bull for Dennis, the other hunter in camp. We did find a bigger group of caribou with one great bull. After half a day of stalking the caribou, we finally got in range. We set up, and Dennis killed his bull. We took care of the bull, and with five of us, we were able to pack it back to camp in one trip. The next day, Dwayne flew both Dennis and Jason back to Cold Bay. After watching the two giant bulls get taken by my dad’s clients, I realized I was up next.

The next day, we started taking apart camp. Later, my dad and I were flown out to another camp nearby. It was only three miles off the ocean. That night, Dwayne joined us, and we were
excited for my hunt to start in the morning.

The first day, we spent the entire day hiking in a big loop around the area to try and find a nice bull but with no luck. The second morning, we followed the river upstream where we found a group of bulls across the river. One of them really stood out as it had crazy big tops that forked. I got ready with my favorite Christensen Arms .300 RUM, and I made a perfect heart shot at 250 yards. It was one of the coolest animals I have hunted, and I was stoked at what I had just done. We crossed the river, which was the first big river I had ever crossed. Unfortunately, my left wader leaked and filled my boot with ice cold water. However, it was all worth it when we walked up on my bull. It was incredible how much bigger his horns grew the closer we got. I was filled with a sense of joy at the adventure I had to harvest this great bull. We packed the bull out and then started breaking down camp. As we worked, I met a friendly red fox that followed us around everywhere and loved to pose for the camera.

We flew back to Cold Bay for a couple of days to do some salmon fishing and learn about the history of the town. It was used in WWII as a military base where B17 planes could keep the Japanese from entering the U.S. after Pearl Harbor. It was cool to see all the history in the town from the Second World War, and it was really cool to see how the people lived there, isolated from everything else. Overall, this was one of the greatest trips I have ever experienced, and I am ever so grateful to all the people who helped me along the way and to those who gave me the opportunity to do something so incredible. Through all the challenges, the people around me helped me pulled through and left some of the best memories I hope to cherish for the rest of my life.

“Obstacles are those frightful things you see when you take your eyes off your goals.” – Henry Ford