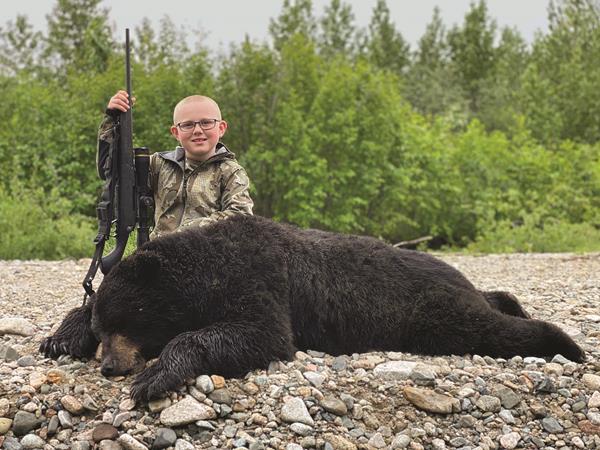 Going to Alaska is a big step for any hunter. I’ve been fortunate to go on many hunts with my family but never my own adventure. This summer, my dad surprised me with my first Alaska hunt. We would be hunting black bear with Jonah’s Alaskan Adventures by Super Cub!

On the flight in, we saw beluga whales and some bears along the coast. After setting up camp next to the plane, we went to sit the bait. The first night at the bait, all we saw was a young grizzly that would not leave.

The next morning, we snuck into the bait and there was a bear already on it. We started easing up slowly until we got up to a dead tree where I could rest my rifle. Jonah told me to put a round in the chamber. I was just about to pull the trigger when the bear disappeared into the trees. Seconds later, an even bigger boar stomped into the clearing. My dad and Jonah said to take him. I took my time and nailed him behind the shoulder. He ran into the timber, and seconds later, we heard the death moan. He only went 5 yards. I could not believe my luck! The bear turned out to be 6’4" with a perfect hide. It was an old boar Jonah had been trying to get all season.

After we got the bear skinned and packed back to camp, I called my mom and grandpa on the satellite phone and told them the good news. Luckily, this is a two bear area and I would be able to take another bear.

Later that evening, we went back to sit the bait again. Jonah spotted a bear right away, but it was just a little sow. A little later, a big bear eased out of the timber. The bear looked big, so we decided to take it. After steady aim, I shot again. The bear bolted into the trees and disappeared. We waited a few minutes to start tracking. The blood trail was good, but the bear went a lot further than we thought it should. While tracking my bear, we ran into a young grizzly and Jonah had to fire a shot near him to get him to leave. After about 300 yards of tracking through the thick brush, we finally found the bear. My shot was a little low, but it did the job. My second bear was a beauty as well. We skinned it on the spot. The bugs were terrible and made the job really hard.

After we got back to base camp, I asked the most important question I had ever asked in my life, “Can we have s’mores and a fire now?” Jonah said yes as soon as I asked. When I got the fire going, Dad and Jonah started telling old hunting stories as the sky light faded away in the darkness. We heard some wolves howling and had a great night.

The next morning, we loaded the plane with all our gear and two extra bears and flew back to the hanger. I had a great time playing with Jonah’s son, Miles, who is my age.

The next day, we drove to see my dad’s friend, Frank Sanders, to try to catch some halibut. When our boat came, I was amazed by its size. It was huge and called “Unforgiven.” Frank is a famous captain known for catching big halibut. He took us eight miles out to sea, and I got to drive part of the way. When we got there, I learned how to bait and cast a deep-sea rod. After I learned how to cast, I felt a tug and then I flipped the switch and reeled as fast as I could. It felt like the world record, even though I knew it wasn’t. When I got the fish in the boat, Dad told me good job.

After one minute, we couldn’t stop reeling in fish. I caught two more fish, and my dad caught one more fish. Then it hit me. I felt a huge tug and knew the fight was on. When we pulled the gigantic fish out of the water, Frank grabbed the .22 and told me to shoot it, so I did. Later, we found out that it weighed 60 pounds. All together, we caught about 30 fish in an hour. When we had to go, I said, “I am always going to remember this trip. I know it.” That night, we processed all the fish and I learned how to vac seal. I guess coming home with two bears and 60 pounds of halibut is about as good as a trip gets.

I would like to thank the Stewart family for inviting me to hunt, Frank Sanders for taking us fishing, the Kronberger family for showing us around, and the Shaffer family for dinner. I also want to thank my mom and dad for always giving me great opportunities!