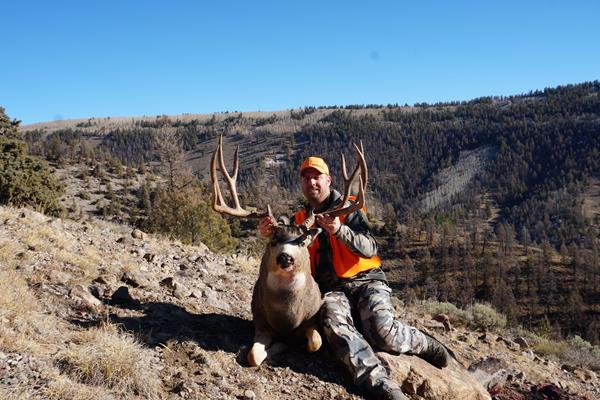 Fall of 2020 was shaping up to be an incredible time as I had back-to-back hunts lined up with friends and family. I had seven days planned in Colorado for deer and elk with friends before heading up to Montana to pick up my brother and chase mule deer.

The first two days, my friend, Andy, and I covered ground with boots and binoculars along a rugged, remote drainage. We looked high and low for deer and elk but had few sightings as it was warm and extremely windy. Our friends, Dave and Mackenzie, were not having much luck either.

Later that night, a storm blew in and I knew it would get the animals moving. At noon, the storm finally let up, giving way to a white canvas. Glassing across a deep canyon, I spotted two bucks feeding in a small meadow. I was studying them when a bigger buck with a kicker appeared. My mind raced. Instantly, I was strategizing how to get closer. A quick look at onXmaps showed it was a mile across, 1,000 feet down and back up. I also noticed a rough two-track road on the other side of the canyon that would get me within a couple miles without having to deal with the elevation change.

Andy and I started to jog down the trail, when unexpectedly, we ran into a herd of elk as they crested the canyon edge. With an explosion of noise, 15 bulls took off. They did not seem to know what spooked them and stopped 140 yards away. I tried to get a shot, but they were too crowded together in the aspen. I knew they were going to cross the trail we were on and I would get a shot eventually. One after another, they started to cross the narrow trail. I kept looking for one of the 6-points when a legal bull stopped right on the trail, giving me a perfect shot. The bull went 50 yards, just making it over the edge of the canyon. He slid down and got hung up on some trees. We tried to get Andy on another bull as they made their way through the timber, but it was just too thick.

As Andy and I quartered my bull, my mind drifted back to the big buck across the canyon. I knew I was not going to make it over there until the next day now. I also wanted Andy to get an opportunity on one of these bulls. I told him he could continue hunting while I packed out a load of meat. Andy found the elk again but could not get a clear shot as he ran out of daylight. We took the next load of meat out, and by the time we got to the side-by-side, it was late and neither one of us had any food or water that was not frozen solid. The last load would have to wait until morning.

The next afternoon, we were finally headed to the nearest huntable meadow where I had spotted the big buck. It was incredibly steep and slippery. We snuck into a small opening across from the meadow and the first thing I saw was a huge buck. I looked for the kicker, but it did not have one. I had to move around some to see the whole meadow, and to my surprise, I counted seven different bucks. Three of them were 3x4, and the others were 4x4. I put my scope on the 180" 4x4 and took the safety off, but I couldn’t pull the trigger. I didn’t really know how big the kicker buck was, but I felt this may have been one of the bucks with him and he may be a lot bigger. It was an extremely hard decision. We backed out of there at dark, and Andy told me with a sigh of relief, “I thought we were in for another late night.”

The next morning, we scouted some other areas and put a plan together for the evening. Andy was going to look for elk, and I would go back looking for the kicker buck. That evening, I sat staring into an empty meadow except for an elk shed that glowed white against the brown grass across from me. I was really thinking that I should not have passed up that buck, especially with only two days left to hunt. We decided we would go back to where we had seen all the elk and the big buck from across the canyon.

The next morning, I brought the spotting scope to look for the kicker buck while Andy kept hunting for elk. It was harder to pick out deer across the drainage now that most of the snow had melted. I had spotted about 15 does across the drainage when Andy came walking up. I was about to pack up when I saw a massive buck with a kicker. He was nearly half a mile from where I had originally found him on the edge of a small meadow. Seeing him through the spotter made me realize how big he really was. To my surprise, he bedded up not far from there.
This time, I was going after him, and I was going to bring some extra eyes with me since I had limited time left to hunt before heading to Montana. I invited my friend, Mackenzie, along to help as she had a deer tag as well. We started our trek into where I saw the buck, and along the way, Mackenzie almost filled her deer tag, but the 4x4 buck would not stop long enough in the small openings for a shot.

Mackenzie and I snuck into the meadow where I saw all the bucks previously. There was a 3x4 buck feeding there, but I told her to hold out for a bigger buck. I left her to watch that meadow while I worked my way over to where the big buck had bedded earlier. I came to a small opening I had picked on onXmaps to glass the meadow from, but I found it thicker than what I had expected. I scanned the area quickly, and through a small opening down the mountain, 320 yards away, I saw a tawny patch of hide. I threw my binos up and knew it was a big buck. I quickly got set up, but the buck moved out of the opening. My heart dropped. I could see him through the trees, but I did not have a clear shot. I contemplated moving, but I could not see any other openings. Suddenly, the buck turned and started feeding back. He stopped perfectly in the small opening, and I fired. A flood of emotions washed over me as I watched the buck’s legs fold and he dropped.

I briskly hiked back to get Mackenzie and tell her the news; she was just as excited as I was! I told her to gather her stuff as I ran down the mountain in front of her. As we walked up to the buck, neither of us could believe the size. After a few pictures, we field dressed him and then propped him up with rocks to cool down. The next morning, Andy and I hiked back in to get pictures and quarter the buck.

While my adventure in Colorado was unforgettable with great friends, it was on to the next hunt. I was headed to Montana to pick up my brother, Ryan, from the airport and meet up with some friends to chase mule deer.
When Ryan and I got to northeast Montana, most of my friends had already filled their tags. Ryan didn’t waste any time, and on the second morning, he was able to notch his tag on a 3x3 buck. We spent the next couple of days looking for a buck for me, but I didn’t find what I was looking for. I mentioned going elk hunting instead since we both had elk tags.

As Ryan and I hiked into a spot, I told him I felt it was going to hold elk. We were glassing down the backside of the mountain when two yellow bodies suddenly emerged from the timber below in a narrow meadow. Judging by the body size and a brief glimpse of antlers, it looked like two good bulls. I shot, and the bull just stood there. After the second shot, the bull took off crashing down a ravine. I pulled my light out where we heard the bull crash into the ravine, and not 10 yards away, my light illuminated a massive 6x6. We were shocked and didn’t realize how big the bull really was.

This fall was nothing short of an amazing time spent afield with friends and family making memories. I was extremely fortunate to take home many incredible animals.