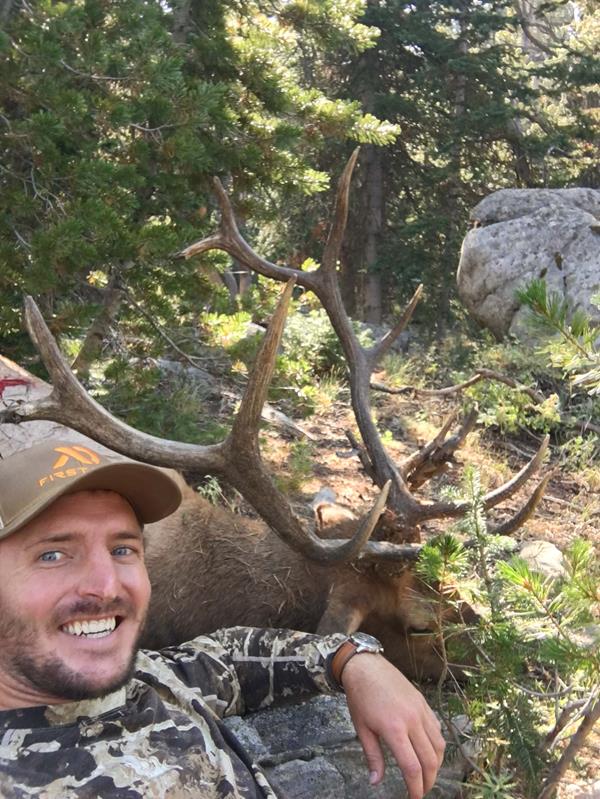 It was the second day of the 2017 season in Wyoming, and the Wind River Mountains deciduous trees were beginning to start the change. The morning was crisp with clear skies, and I was excited for the challenge that solo elk hunting brings. I had not filled a tag the last two seasons and had spent the last three months scouting this hunt area. The previous day had been filled with sitting on wallows and parks that had previously had my cameras hung on them, and I had pictures of many nice bulls. Yet, I had not heard a peep of any kind and knew the odds of finding a good bull without them talking were low. Therefore, I bailed on my top four options, drainages I had spent all those months scouring, and shot gunned it to an unknown area.

I left my spike camp at 4:30 a.m., and after driving to the trailhead and hiking in, I found myself a few miles from the nearest trail at sunrise. To my delight, I found the sky filled with the sound of bugling. I responded to several bulls, chasing their frustrated cries and trying to cut the distance in half every time I got a reply. Racing the clock and not wanting to lose elk to their day beds, I took a very aggressive approach. This tactic cost me the first two bulls of the morning, thankfully neither of which were mature.

As the morning wore on, I found myself losing hope. I had just set up on a bull, only to have a bugle ignored and run from a cow call. I sat and ate my granola bar breakfast and decided to try one more bugle to this bull and doubled down on my aggressive approach. I ripped off a lip bawl bugle, and he replied with a lip bawl of his own. I quickly cut the distance by sprinting 200 yards up a drainage wall and lip bawled at him again, and again he replied, more agitated and throaty than before. I cut over another small ridge and froze. The brush 40 yards in front of me was erupting. I initially assumed I had blown another stalk, until I saw him, or at least the beams of his antlers. He was opposite a 50 foot pine tree and raking the lower branches, thrashing and tearing into this tree. I decided he was a shooter before I got a clear look at him. Seeing parts of antlers and listening to his rich, throaty bugles had made my mind up. I nocked an arrow, grabbed my bugle tube, pointed it right at him, screamed a challenge bugle in his face, and prepared to draw. He stopped raking for only a second, gave a half interested look in my direction, and continued to do his best to uproot a 12 foot pine. Seeing as he had no interest in stepping out or coming to me at all, I began to sneak towards him. I cut the distance in half, and still not having a shot, began to circle him to try to find a lane. Suddenly, he spooked at 20 yards. I instinctively drew, anchored, and prayed. Seeing this bull run was my greatest fear coming to realization. The bull started up a hill but stopped 35 yards away and looked back in my general direction. I had 2 foot by two foot opening in the trees. I settled my pin behind his shoulder, leveled my bow, and squeezed the trigger. The arrow flew straight and my aim was true as I heard the arrow hit and saw the impact through the riser of my bow. I immediately cow called, and the bull stopped, stood for 10 seconds, and toppled over. I collected my arrow, which passed through, and then admired my trophy.

So many miles and days had been spent scouting and preparing for this moment. The pack out took a total of 16 hours, and I covered 24.3 miles to get this bull out. To me, he is a trophy, a solo hunting accomplishment, and one I will never forget.