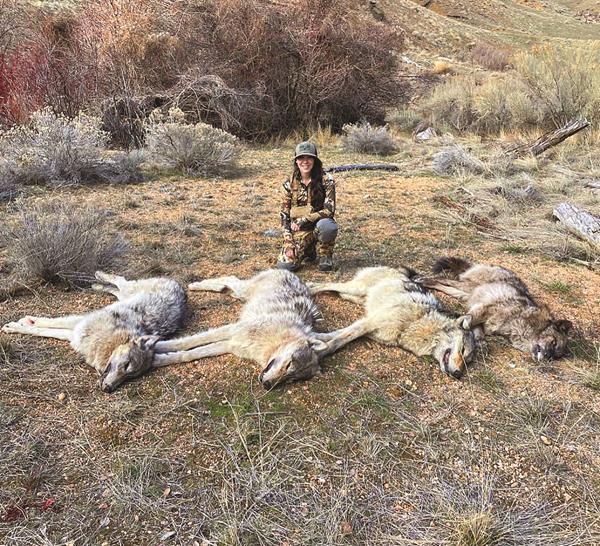 To accurately depict this story, I have to take you back to the spring of 2021. I was home with our 3-week-old baby when I received a text from my husband, Justin, from his InReach, saying, “I just shot two wolves.” We had recently moved to a new area to be closer to public land to hunt, and with a new area came figuring out a new wolf pack. Elated at the news, I had a feeling this was just the beginning of what would be a drawn-out saga with this wolf pack.

Over the course of the following months, we got out to hunt this pack as much as we could, or should I say, as much as having two small children and full-time jobs allowed us. We spotted this pack regularly, but they were usually miles away. We would watch helplessly as they scoured the mountainsides and ridge systems. These sightings, though disappointing, were not fruitless. Every time, we learned more about their behavior, territory, habits, and movements throughout. With every encounter, we came one step closer to getting them. We came to find there were six wolves in this particular pack.

With the winter upon us, so was banquet season for the Foundation for Wildlife Management (F4WM), of which I am a board member. At one of our F4WM banquets, I decided to bid on six wolf traps. Neither I nor my husband had ever trapped before, but having just gotten our trapping licenses in November, I decided we should probably get some equipment. We also decided to try our hand at trapping. Due to our familiarity with this pack’s route, we figured we had a decent chance. In our minds, traps could hunt 24 hours a day as opposed to us driving a couple of hours and only being able to hunt about once per week. With all the research, hiking, and time spent learning about this particular pack, we looked at it as though we weren’t trapping but we were hunting with traps.

In Idaho, you must check your traps every 72 hours, so we teamed up with a friend of ours who had also never trapped before, knowing with two little kids and work it would be nice to switch off checking the traps if need be. At least every three days, either one, two, or all of us hiked in a couple miles in two feet of snow and checked the traps. Each time, we got a little more discouraged. We knew trapping was difficult and that many trappers will never catch a wolf, but it was discouraging nonetheless.

On March 22nd, six weeks to the day after we set the traps, my husband hiked in while I stayed home with the kids. He had been gone a couple of hours when I received a message from his InReach, saying, “Wolf tracks everywhere. Four traps missing.” The traps were attached to drags, and since the snow melted, it was easier for the wolves to go a greater distance. I knew he was going to need help finding them and packing them out, so I quickly called up another buddy whose mom also doubles as our emergency babysitter and asked if she could watch the kids. I then asked him if he wanted to come along for a pack out as our trapping partner was out of town for two weeks. I sent off a quick message to Justin, saying, “On our way!” and our friend and I made the two-hour drive to the traps. We hiked in and found Justin, who had already found and dispatched two of the wolves. Spirits were high, but with the snow having melted, it was more difficult to track the wolves. After a total of 19 miles zigzagging through drainages and searching every nook and cranny on the mountain, we found the other two wolves, which I dispatched. While I had successfully hunted wolves before, I was surprised to find the same if not more sense of accomplishment trapping them.

The adrenaline of the day’s events beat out any exhaustion I should have felt. Never in my wildest dreams did I think we would ever get four wolves in one day, and to be honest, I could hunt and trap the rest of my life and never have it happen again. Having had a long history with this wolf pack made it an extraordinarily sentimental day. As we packed four wolves off the mountain, I couldn’t help but feel a sense of great respect and honor towards these animals. For months, we played a game of cat and mouse, seeing what they were capable of and their intelligence, strength, and speed. With the wolf on my pack, I came to feel not so much as a hunter packing out her kill but more as a pallbearer taking this worthy adversary to his final resting place.