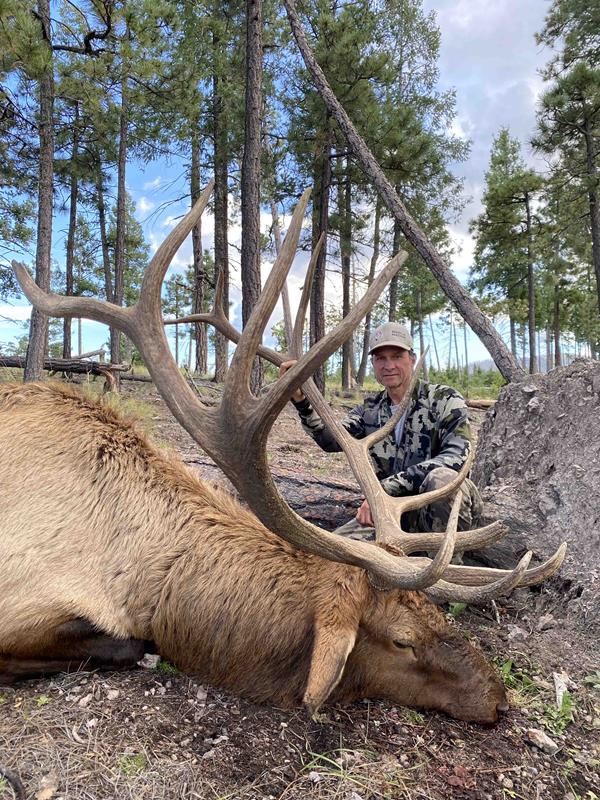 When it comes to hunting, each one of us can remember our first contact with the outdoors. For Jeffrey Brown, his came on the side of Mt. St. Helens when he finally got the call to join his father on an elk hunt He recalls, “I’m in the big leagues now.” From that time forward, his love for the hunt with family and friends ensued, and the rest is history.

Jeffrey, his father, and his five brothers eventually started looking at more hunting opportunities outside of their home state of Washington. That search led them to Logan Hedges from Huntin’ Fool and then to Hunt Hard Outfitters where I, Jeff Lester, am the owner. Jeffrey and I started talking and came up with some ideas that would coincide with what he was looking for in his next hunt. He quickly realized that being in the outfitter sponsored draw in New Mexico would greatly increase their odds at drawing public land tags, where if not successful, they could buy landowner tags.

In pursuit of quality hunting opportunities, Jeffrey has entered some of the western big game tag raffles. Most states in the West each year release a few tags in these raffles to earn money for conservation. Knowing that the tags had low odds of winning, Jeffrey was not expecting success, but win he did! He was shocked when he got the call from the New Mexico Game and Fish Department informing him that he was the winner of the 2021 Statewide Raffle Elk Tag. He could not believe the news! After informing his family and others of his good luck, he eventually called me in late June.

As a full-time outfitter in Arizona and New Mexico, our schedules are typically set and we are already preparing for the upcoming season by late June. Jeffrey and I discussed available options, and one thing was for sure, he didn’t want to be “on call” to hunt. Often, raffle tag holders or any statewide big game tag holders will wait for the call when a specific animal has been located. They will then come and hunt until that animal is taken. Jeffrey made it clear he was not interested in hunting that way. In his words, “I want to enjoy the hunt. I want to be there for the hunt. I want to hunt the rut.” This method for an auction tag hunter impressed me, and I was happy to integrate his style into our already full schedule. He was also very willing to work with our guides and me to make this full experience come together just the way he envisioned it. After a few adjustments and fulfilling prior commitments, Jeffrey and I went hard in the field together starting the first week in September.

The rut started hot and heavy early in the Gila this season. We had a very dry spring and summer and then an extremely wet monsoon starting near the first of July. You just never know for sure what the elk are going to do when the weather alters against the norm. We had a pile of feed on the ground, and the elk were healthy. The rut was on and in full swing earlier than normal. Jeffrey and I mainly focused on three premier units in the Gila National Forest – 16A, 16D, and 16B. For the first 10 days, we concentrated specifically on one bull. Other hunters were hunting the bull as well, so the amount of pressure the bull was getting was high. We felt we had him narrowed down to one location, and then out of nowhere, Covid-19 hit me and a few days later it hit Jeffrey as well. We pushed through, but it took its toll on us both. We hunted through five days of it, but we took the back five days off right when we needed to be on the mountain. The time ticking away each day during the rut was almost more than I could handle.

When we resumed, we started by bouncing from one large group of cows to another. Jeffrey put multiple big bulls in his crosshairs only to hear me say, “No! No! No!” We passed many great bulls each and every day, but none fit the bill for what we were looking for. As September was coming to an end, we started looking for a bull we had pursued earlier in the hunt. At that time, we had been told he was a great bull but not what we were looking for. Our goal then became to go back and put eyes on this bull to see for ourselves what he truly was. As luck would have it, we sat down and ate lunch with John and Jeremy from New Mexico Professional Big Game Hunts. As we talked, we realized that Jeremy had hunted this same bull in archery season and had video. One look at the video and we all agreed that the bull was much better than we had been led to believe. Luckily, John and Jeremy are friends of mine, so we could be open and honest with one another. As it turned out, Jeffrey and I were right on top of the bull, and the information they gave helped us stay and focus on this one particular area.

The bull had moved only about a mile from where Jeremy had hunted him three weeks prior. A day and half later, we had eyes on the bull. We watched him for most of the morning and then moved in tight to decide if this would be the one. After playing out a few scenarios and factoring in the time available to hunt the late season, Jeffrey decided that he wanted to kill the bull. It was a good decision. The big bull actually gave us a now-or-never opportunity, and Jeffrey made one perfect shot in a very high-pressure moment.

It was a great success! Jeffrey was an absolute pleasure to hunt with. His wife, Susan, was with us many days of the hunt, including the final moment, making it even more special. Two of his brothers and his nephew also came for part of the hunt. For the first time in 60 years, his father was not on the mountain and was greatly missed. Thirty-one days on the Gila can be a grind, but Jeffrey was up for it and not once got down or discouraged even through sickness. He was always upbeat and ready to go, which provided him an experience and opportunity to fulfill his goals with us and take home this amazing trophy animal. I’m sure this won’t be the end of his pursuits in big game hunting, and I hope we will connect again out on the mountain. Until then, congratulations, Jeffery Brown, on taking this awesome New Mexico bull!