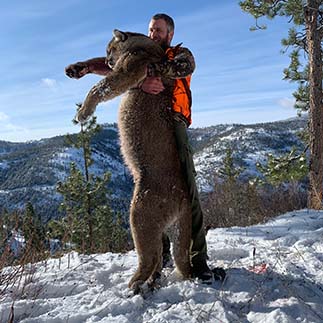 It’s no secret that hunting opportunities throughout the West are becoming increasingly difficult to come by each year. If you had the same luck as I did in your big game draws this year and you are looking at all available options to get on a hunt this season, you may be overlooking a good one – predator hunts. These hunts are a great fallback option with a variety of states and species to choose from. Tag fees for bear, mountain lion, and wolves are not expensive, and in many areas, they can be bought over-the-counter.

Prior to last season, I had only hunted bears and wolves, but I had never been on a lion hunt. After chasing cats for the first time, I now believe it is easily the most underrated of the three and possibly of any western hunt. For many, the perception of what a mountain lion hunt really is tends to be overly simplistic. You just follow some hounds to a lion that’s caught in a tree and then you shoot it. No big deal. That couldn’t be further from the truth. There is so much more to the experience.

Typically, a lion hunt begins early in the morning in search of a track along isolated roadways and logging trails. Cutting a fresh lion track is exciting, and upon determining whether the track belongs to a tom or female, how fresh the track is, and how big the cat that made it might be, a decision will be made whether to turn out the dogs. Part of the excitement of a mountain lion hunt is the unpredictability of what lies ahead once the hounds are released. The chase could go on for the rest of the day or a few short minutes. Once turned loose, the hounds are the real hunters; your only job now is to try and keep up with them. Their chaotic howls as they chase the cat up the side of a mountain only adds to the excitement as the cat does its best to lose the dogs through the steepest and most unforgiving country it can find.

On day 13, we finally stood under a tree with a big, mature tom looking back down at us. The hounds had done their job, and I was able to reward their hard work by taking him. In the days leading up to this one, the hunt had taken many unexpected turns. Between getting a hound caught in a wolf trap, getting into a fight with a bear that wasn’t hibernating, and a few fights with cats that wouldn’t tree, the hunt was unlike any I’d ever experienced. On one occasion, I watched in disbelief as the houndsman broke up a fight between his dogs and a younger lion that had been caught on the ground after refusing to tree. I watched in disbelief as he used his bare hands to pry the cat’s jaws off one of his dog’s heads. The love and respect that houndsmen and their dogs have for each other is immense.

If hunting mountain lions behind a pack of hounds is not on your hunting bucket list, it should be. The pursuit of perhaps North America’s most elusive animal will test you physically and emotionally. It will provide you the highest of highs and the lowest of lows and push your mind and body to the limits. I can promise you that seeing the eyes of a mountain lion staring down on you from the tree as the dogs bay their “treed” bark will be an experience you won’t soon forget. If you have any questions about options for hunting lions or other predators this year, give us a call!