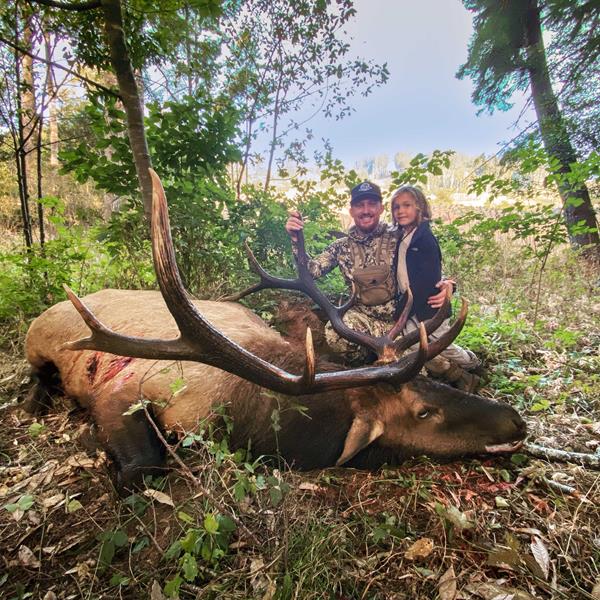 I’m not sure what it was about bowhunting elk that got my attention initially because I was never a bowhunter and I had never even hunted elk. About five years ago, my twin brother decided that he wanted to start hunting and I thought it would be a great experience for us to do it together. He was getting into rifle and bowhunting, but I was most focused on the bow because I was terrible at it and I hate being terrible at anything. After about a year, I had picked up all the equipment I needed to be fairly proficient with my bow and felt comfortable shooting out to about 60 yards. My brother, cousin, and uncle had all drawn the out-of-state elk/deer tag in Montana, and I decided that I was going to go and assist as best I could to kill an elk. After a week of many miles, we came home with no elk and one mule deer.

Although this trip was largely a failure, it was a major success in my mind because I loved the hunt and all the things that came along with it. It was a struggle, and for some reason it felt good to struggle and to pain for a good goal. On this hunt, I learned a lot of things from my brother who seemed like a natural in the hunting world and from my cousin and uncle who were seasoned veterans to hunting.

After a few years of being unsuccessful with my bow, I was able to have some success with my rifle and in turn felt confident about my upcoming 2021 season. I purchased an over-the-counter tag in Oregon for archery elk, and being that I was a Northern California resident, I could easily hop over the border to go hunt about as often as I wanted. On the home front, I have an amazingly smart and beautiful wife, and I have six wonderful children 7 years old and under. Needless to say, time is one thing that I do not have a lot of. I needed to be very disciplined with the time I did give to hunt if I wanted to be successful.

One morning, I went up the mountain and it was pitch black on the path. Suddenly, it sounded like I ran into a startled group of horses. Turned out that stampede of horses was the group of elk I had been searching for. After realizing what I had done, I bugled to them thinking they may be fooled by a bull location call, and sure enough, they were. They came back to my location, and there was a herd bull that was not happy with me and wanted to put up a fight. That bull came in to 27 yards, but I never had a good shot, so I decided not to shoot.

I knew there were elk in that spot, so I decided that I would give it a day or so as to not add more pressure than necessary. After a couple days, I proceeded to hit the mountain again hard and make it happen. It was crickets when I started going back in the morning and evenings. I was not seeing new sign anywhere, but I figured elk move in patterns and would likely move through here again. About a week later, I showed up early to my spot and parked my truck with my second oldest daughter, Rosemary, who was 6 years old. I was feeling worn and decided that before I got out of my truck I was just going to send out a location bugle to see if I would hear anything. To my surprise, I heard a response from a bull a long way off up the mountain. I turned to Rose and said, “The elk are here today.” All of a sudden, I heard the sound of a large hoofed animal rushing towards my vehicle. I looked out the front of my truck and standing there about 20 yards away was an enormous bull elk. I couldn’t believe it! Rose was still in her car seat and my bow was in the back of the truck in my SKB case, completely disassembled.

I crept out of my truck and had Rosemary come with me. Luckily, we were able to get out of the vehicle without him seeing us. I grabbed my case out of the back while quickly and quietly putting my bow together. All of this was happening as that elk moved around my truck searching for the source of the call. He was obviously very worked up and had no plans of leaving until he confronted this mystery elk that was in his area. Rosemary and I snuck around the front of our truck, and he had us pinned down. I could hardly poke my head around the corner to get a range. I moved slowly and got a range while he was just about 20 yards away. I was determined not to screw this opportunity up as I was sure this was going to be the last chance I would get for the season. I drew my bow back and let it fly. I saw the red stream of a lighted nock and heard the thump of impact as the bull took the hit and bolted. He ran down the hill and came back up to where I shot him and crashed. I gave him some time to die. After a while, I put another arrow in him at 70 yards to seal the deal, or so I thought. Both shots were placed perfectly, but this animal was an old warrior and was not going down without a fight. I gave him another hour to die, but he was just not dying, so a third arrow got sent and then he gave up the ghost.

Harvesting my first bull with a bow and also with my daughter was about as memorable of a hunt as could possibly be. It also added to the memory that this was no ordinary Roosevelt, he was massive and would feed my large family for months to come.