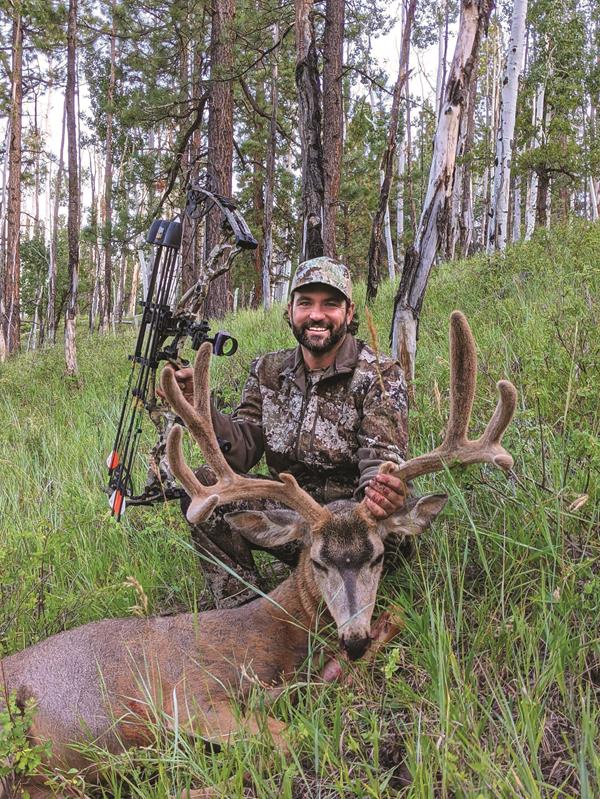 As an outdoor enthusiast and one who loves hunting, it’s hard to hear about people taking our animals illegally. It ruins it for all of us. I was able to help in a case of someone taking an animal illegally, and I was given a reward tag. Once the tag was issued, it didn’t allow much time to scout and coordinate work and life’s busy schedules, but given that this was a once-in-a-lifetime opportunity, I made it happen.

This was a special tag, and I wanted to include as many family members and friends as possible to share the experience. The hunt was only a few days away, and I wasn’t sure if I was ready. Ready or not, the day had come to load the truck trailers and ATVs. Arriving a few days early, we were able to scout different areas and enjoyed seeing deer, elk, and turkey. We filmed some good deer that got me excited for the hunt.

Opening morning came, and I was excited and nervous. I was after a certain buck we had seen a couple days before the hunt, which we had named “Blade.” He was very wide and heavy and a great 3x4. We had seen a few nice deer throughout the day but not the one I was after. I was starting to worry. I had multiple opportunities at some great deer but was holding out for “Blade.” My son (10), daughter (12), and nephews (8 and 12) who were hunting with us could not believe that I had passed on such nice deer. Back at camp, they would hold their heads down, kick rocks, and tell their moms I had passed on a gigantic deer. I laughed and could relate to that back when I was that age.

On day two, we headed to the same area where I had last seen the deer I was after. We could not turn up the buck I was hoping for a chance at. We spotted several other bucks and one nice 4x5 that was tall and heavy. I thought I better take this opportunity and try for this buck. My brother and I set out on a stalk. As my brother would range the deer, it allowed for me to focus on shooting. I had multiple close encounters with the buck and a couple missed shots. After missing the buck on the last shot, I turned back to my brother and saw a look on his face of complete surprise and shock. I asked him, “How could I miss that?” I was discouraged and both mentally and physically exhausted.

We went back to camp and regrouped. I shot my bow multiple times and was right on. I guess buck fever really got to me! Encouragement from everyone at camp and not giving up put us right back in the same hunting area. That evening, we had spotted the buck I was after. He looked so much bigger and older than the other deer hanging with him. We built a plan, and the stalk was on. I was able to get within 42 yards of the buck, settle my pin, and let an arrow fly. It was a great hit, and the buck went down immediately. I couldn’t believe it! I had just harvested the most amazing deer. The stars had aligned for me in more ways than I can describe. I had dreamt of this moment, being with my family in the most beautiful place on earth and chasing such magnificent animals.

We all gathered together and approached the buck. He was so majestic and even bigger than I had thought. There were tears of joy and gratitude, hugs, and kisses as we celebrated this amazing experience. As we packed him out, the daylight had gone, only to be replaced by the most beautiful night sky, full moon, and stars. Thank you to all who helped and supported me, and thank you to the man above for giving us this amazing opportunity.