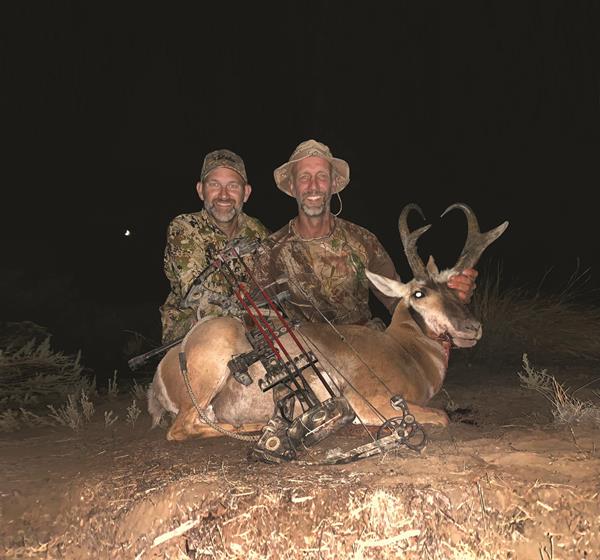 While taking a picture of one of the many giant crickets on the first morning of our hunt, two strangers rode up and told us these crickets are called “Mormon Crickets.” Apparently, they show up by the thousands every seven years.

After brief introductions, we were invited to hunt with one of them. They were locals, but neither one of them had a tag. He was simply offering to spend a few days with us to help locate, hunt, and harvest a good buck in the area. Turns out, he is a local fireman and was going to use his fireman brotherhood to help a lone bowhunter from Texas find some success in the middle of a Nevada desert. Wow were we ever fortunate to run into Mike and his network of hunters!

After 16 years of waiting and 22 hours of driving, I picked up my friend, Josh Putnam, whom I had not seen for 20 years, from the Salt Lake City airport. We arrived in the unit four hours later after being amazed by the vastness of all the salt flats along the highway that we had only seen pictures of in the past. We had an eight-day window to attempt to harvest an antelope. Even though I had spoken with numerous hunters from Huntin’ Fool as well as the game warden and the game biologist, we knew it would be no easy task. If I was going to be successful, it would be my first with a bow. We decided to camp and hunt in the area that Brent Near, a Huntin’ Fool member, had told us about. This narrowed our hunt area down to 70 square miles instead of the vast 2,795 square miles the entire unit encompassed.

After taking an unexpected ride down a small mountain on our four- wheeler that had no brakes, we joined our newfound hunting guide that morning. The first day with Mike, we covered 60 miles on his side- by-side and our four-wheeler. We realized it was not going to be easy. Mike made a few calls and had Jeremy, another fireman, scouting another area of the unit at the same time. All in all, we saw some antelope, but sightings were few and far between.

By the second day, we realized that stalking and decoying were not going to give us good results, so finding the “right” waterhole was going to have to be the answer to our quest. By the end of the second day, we had two encounters with a worthy buck, both at waterholes, and one was as close as 10 yards! While Josh and I were waiting for Mike to return to the blind after putting the side-by-side where it could not be seen, the buck showed up. The only reason we knew he was there staring at us in front of the blind was because Mike was laid down on the ground pointing at him while we were staring out the back of the blind looking at Mike. Wow, did we ever mess that one up!

The next few days, we hunted without Mike. After numerous days of heat, dust, and a lot of traveling, riding double on a small four-wheeler, we made our way back to our original waterhole. Though we had checked out many more springs and tiny waterholes in the area with limited sign of antelope, we felt this one was our best chance. Sure enough, numerous antelope came in to get a drink. They each would trot in, pay very little attention to our blind, get a drink for about 40 seconds, and then trot away. Finally, in came that same buck we had already encountered twice before. I drew back as he was drinking at 45 yards, but my peep sight was off thanks to the inordinate amount of dust that had collected on my string, so I drew down to adjust my peep sight. As a result, he saw movement and ironically moved to a waterhole that was 25 yards closer. Yet, this time, he put a 6" x 6" post between us while he took his 40-second gulp of water and promptly trotted away to never be seen again.

Day seven came, and all our cards had been played, but we had still come up empty. What to do? We talked to our fireman friends to see if they had any other ideas. Jeremy told us about a specific waterhole we should check out. After many miles, we arrived and bumped a few antelope off the waterhole. We promptly set up and decided to return later in the day. After sweating it out on our fifth waterhole blind setup and being entertained by the cattle that had claimed the waterhole as their own, a buck and doe trotted right up and began drinking 27 yards away. I pulled back and held for what seemed like an eternity while I waited for the right shot. I released and hit the buck, and then the excitement set in. We tracked him for 566 yards because the arrow had cut his jugular vein. You see, because of all the rough miles on the four-wheeler, my sights got bumped and I made a bad shot, but we found him right before dark. What a glorious relief it was to put my hands on this magnificent animal! I later scored him at 77 1/4".

We were extremely blessed to have met and become friends with Mike Abrams and Jeremy Neil. They are hard-working firemen from Carlin, Nevada who simply love to hunt and were willing to go out of their way to help a non-resident bowhunter have success in their “neck of the woods.” You do not run into men like this very often, and I hope to be hunting with them next time I return to Nevada. Finally, praise be to God for allowing us opportunities like this to experience generous people and a great adventure.