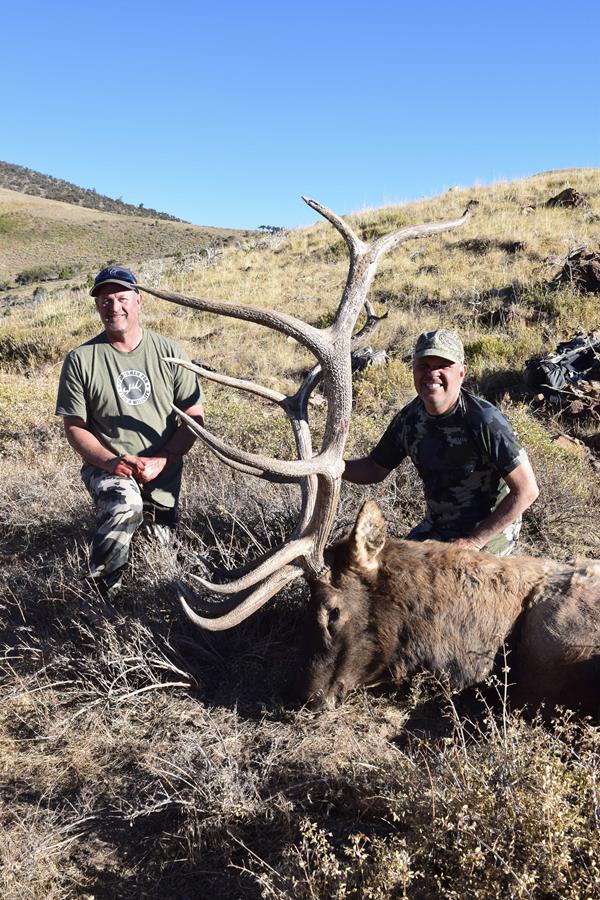 My passion for elk hunting dates back over 25 years when I shot my first bull with a rifle. Over the next 10 years, I shot a couple of nice bulls, including a 350" class 6x6 bull in Utah. This was my first hunt with Wade Ovard. I have hunted both elk and mule deer with Wade a number of times since then. Over the last five years, I had focused on a big archery bull. I had some memorable close encounters in Arizona, New Mexico, and Colorado, but I was still shy of my goal of a big archery bull.

As 2019 came to a close, Wade brought up the option of purchasing a Nevada landowner tag, especially given the high precipitation levels over the last few years in the West. We anticipated above average antler growth and were not disappointed. Wade has had extensive experience guiding in both Nevada and Utah. We were able to obtain a unit 221-223 tag, and the quest was on.

Wade’s preseason scouting confirmed what we had expected. The high moisture levels had provided above average antler growth. I arrived in Ely on August 28th with much anticipation. The drive out to camp confirmed the extremely hot, dry conditions of the last eight weeks. Wade had set up a comfortable camp in the center of where the elk typically rut. Wade’s partner at White River Guide Service, Mark Lane, and his buddy, Rocky, rolled in that night to help locate elk. The hunt’s first morning gave promise as a nice, big 6x6 bull was spotted, bugling and chasing cows, going into the timber. As the sun rose, things really quieted down. The next three days with daytime temps of nearly 90 shut down any rutting activity. However, we did glass a few elk, including an albino 5x5.

Based upon Wade’s elk hunting experience and his intimate knowledge of the unit, he suggested we investigate the higher elevation basins where the elk summer. That afternoon found us glassing from a ridgeline overlooking one such basin known to have bulls from Wade’s summer scouting. Getting there included a 45-minute ATV ride over dusty dirt roads and a hike up a steep ridge. Sure enough, as the sun set, we started to see bulls feeding in the shadows on the mountain face. We saw a total of 26 bulls, including three “shooter” type bulls. A large 6x6 came to the spring for water at the head of the basin as dusk settled.

Over the next two days, we tried unsuccessfully to find some rutting bulls. A return to the high basin confirmed that the big bulls were still coming to the spring just before dark. We formulated a plan for the next evening. The only cover downwind of the spring was a small patch of four-foot high brush, which we felt I could use as a blind. We were not quite sure how far from the spring the blind would be. As we returned to camp that night, we encountered a beautiful full moon. This was quickly obscured as the wind blew in smoke from the California forest fires. Fortunately, by the next morning, the wind changed direction and blew the smoke away.

We returned to the basin the following afternoon with temps in the mid 80s. After hiking down to the “shrub blind,” we found that it was 86 yards to the spring. As I could not get any closer, I sat down and waited, roasting in the sun. As the sun set behind the mountaintop, the bulls began to appear out of the shadows of the cedars on the mountain face. I observed a couple of nice bulls really going at it fighting. A new big 6x7 bull was spotted, and he was a definite shooter. He gradually descended from the mountain face, feeding towards the spring. It seemed like an eternity as I waited for the opportunity to shoot. I was concerned with the shot distance but remained confident as I had practiced out to that range. I never imagined that I would actually be presented with such a long-range shot.

As the bull got around 150 yards from the spring while feeding, he looked up and saw three smaller bulls coming to the spring from the opposite direction. Wanting to be the first one there, he walked directly to the water. When he put his head down to drink, I stood up, drew, and slowly released my arrow. I saw and heard the arrow center punch him. He whirled around and trotted lower down the basin to about 106 yards away where he stopped. I could see him bleeding out of the exit wound down his side. He slowly walked away out of my sightline. Wade had been watching the entire sequence of events from the ridgeline. As darkness closed in, Wade observed the bull bed down but with his head up. In order not to push him out of the basin, we decided to pull out and come back in the morning.

After a long, sleepless night reliving the shot, we returned at first light. As we crested the ridgeline, Wade glassed the spot where the bull had bedded down and echoed the magic words, “Congratulations, Bob!” We hiked down to our beautiful bull. After celebrating and reliving the hunt, pictures were taken. Then, the hard work of caping and quartering the bull began. We had a mile hike out of the basin back to the ATVs. Fortunately for us, Clint Hess, one of White River’s guides, came with us that morning to help with the pack job.

The next morning, I was able to start my drive back to Wisconsin. My bull scored 377", fulfilling my quest for a big archery elk. White River Guide Service excelled in all aspects of this hunt. I am grateful to Wade for all of his hard work preparing for this hunt and his extensive experience. We are already planning for next year’s hunt!