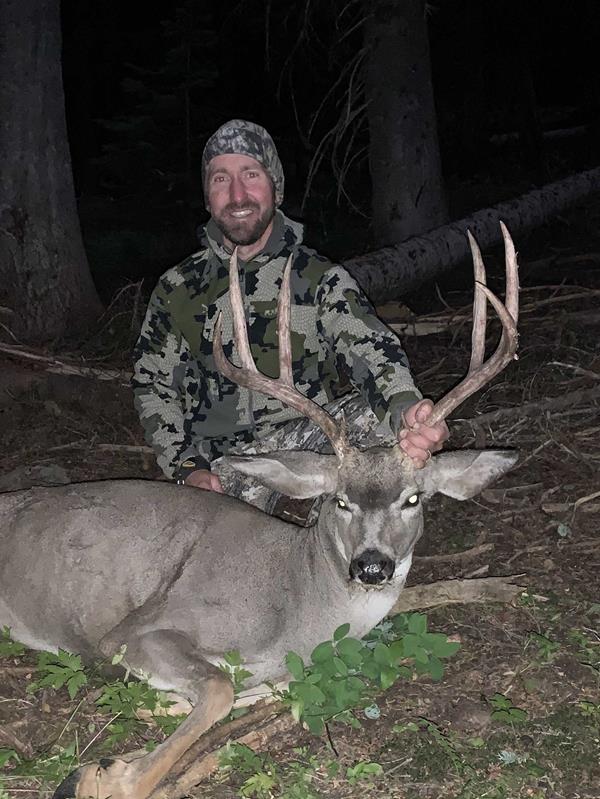 My wife and I went into the Eagle Cap Wilderness area in Oregon for a week-long backpack bow hunt in early September. The focus was on elk, but I had both elk and deer resident tags in my pocket. It is worth mentioning that we are 2017 transplants from Wisconsin and still fall into the rookie category when it comes to hunting elk, particularly cow calling and bugling. We hiked in and set up our base camp at the head of a small creek on Saturday morning. We spent the next two days getting the lay of the land, locating, and chasing elk.

On Sunday morning, we heard some distant bugling and made our way up and through a field full of old blowdowns. We stalked in as close as we could and decided to try to call the bull in. My wife called in a nice bull elk with some cow calls while I bugled at him. I was able to creep up and get behind two small spruce trees when I caught a glimpse of the bull. He was a nice 6x6 and closing the gap quickly. Unfortunately, he busted me at 23 yards while I was drawing back my bow. He won the stare down when I had to let off my bow. He took off with a thundering herd that we never got to see, but we spent the rest of the day trying to locate them again. We decided that if we never got another shot at an elk on the trip, that was definitely a win because it proved we could call a bull in. We were stoked!

Monday morning started out windy and only got stronger throughout the day. We spent most of the day glassing and blind calling, and after a brief trip back to camp to grab some lunch, we were back at it. At around 6 p.m., we cooked up some Mountain House chili mac, which we were going to save for a victory meal, but it was the dinner that ended up in my pack.

We were set up in another field of blowdowns, and the wind was howling. It was so strong that we could hear trees crashing all around us. Over a dozen widow makers had come crashing down, and eventually, one came down that was too close for comfort and we decided to head back through the dark timber towards camp. We were walking quietly, not expecting to see anything as the light faded and the wind whipped, but the wind helped conceal our noise and is likely the reason we were able to get within 20 yards of two bedded mule deer bucks. They both jumped up, with one trotting down and to the right just enough to be hidden by the forest. The second buck went 10 yards and turned back to give me a final look. I ranged him, drew back my bow, and then let off. Did I really want to shoot this buck on the third day of a week-long hunt? I'd more than likely be giving up my chance at an elk. It didn't take me long to decide. He gave me a steep quartering away shot, which I was able to make behind the last rib and through the heart. He bolted downhill. I was confident in my shot, but the confidence starts to slip as you replay the shot in your head while you wait.

We started to look for blood after about 20 minutes. The light was fading, and the dark timber was only going to make it harder to find. There was no blood! We were able to follow the tracks as he had churned up the dirt on his sprint down the hill, but there was no blood. We started to get nervous, but we kept going. We got to the end of the tracks and had to go left or right. My wife said, “Wouldn’t it be nice if he died right next to the trail?” The trail was to the left. We turned right and a buck jumped up and ran uphill. My heart sank. It must not have been a fatal shot, or was it just the buck’s buddy? We decided to go back to camp and start looking again in the morning. I prepared myself for a long night.

As we walked toward the trail, lamenting about the lack of blood and hoping we’d find him, I happened to look off to my right and there he was. He only made it just over 100 yards before collapsing, not right next to the trail but within about 100 yards of it. Relief and gratitude washed over me. I realize that he is not a record book animal, but he is the largest deer I’ve taken with a bow, the first animal (other than a turkey) that either of us had taken in Oregon, and it was our first successful backpack hunt. My wife, who is actually a little afraid of the dark, headed back to camp in the last bit of light to retrieve our game bags while I got to work.

After processing the deer and hanging it near the trail, we were back at camp late and exhausted but happy with our success. Unfortunately, we were not equipped to continue hunting for elk, but I didn't feel like being greedy either. I was more than happy with the tag that I had punched. This was only our second “long” backpack hunt, and even though this one ended earlier than we had prepared for, it definitely solidified that we want to continue hunting this way.

We learned on our drive home on Tuesday that the windstorm that had pushed us into the timber on Monday night was the same wind that fueled devastating fires throughout Oregon. We had to reroute our trip home, seeing the smoke and fires in the distance, and learned of friends having to evacuate their homes. Oregon will recover from the fires, and we will definitely be in the woods again in 2021!