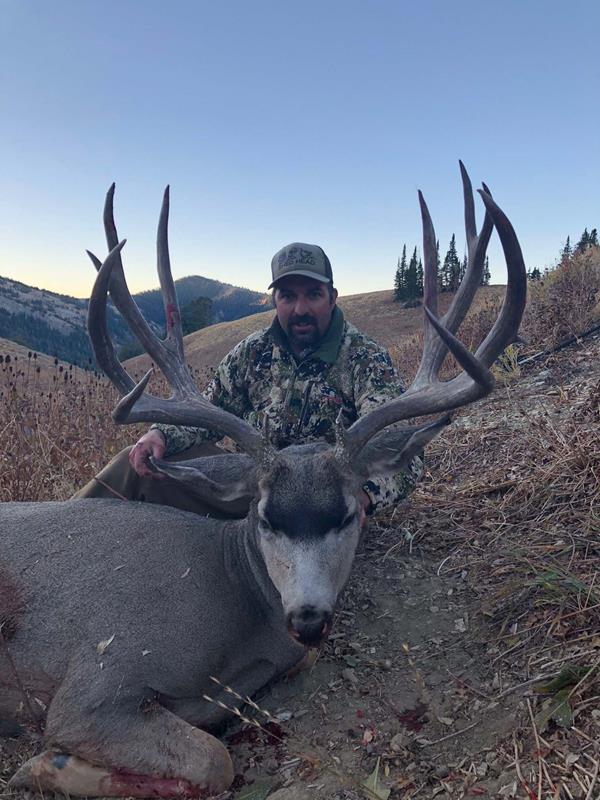 If you are a trophy mule deer hunter and names like Popeye, Scar, Goliath, and Magnum are spoken, you probably automatically think of western Wyoming’s regions G and H. These regions have always been a strong topic when discussing mule deer hunting out west. Where one hunter may love these units and say it was the best hunt they were ever on, the next guy might say it sucked and all they saw was orange hats on every ridge. Regardless of your opinion or hunt experience in the past, the simple fact remains that numbers don’t lie. The Wyoming Range has been producing trophy class mule deer since the beginning of time, according to some old timers. Since harvest records didn’t really start being taken until the early 1980s, it is hard to say just how good western Wyoming deer hunting was in the early and mid-1900s. Talking with some of the guys who hunted back then, it sounds like a mule deer hunter’s paradise.

There has been a dramatic decline in mule deer numbers out west in the last 30 years. Depending on who you talk to or what study you read, this can be contributed to many factors, including habitat loss, lack of predator control, overgrazing by livestock, increase in elk population, and hunting. Regions G and H are no exceptions. Where the Wyoming Range used to hold over 50,000 deer, recent counts show about half that number. Even with a significant decrease in population, G and H are still producing some great bucks. There are a few reasons for this, but the main reason is simple – genetics! In all breeding programs, from cattle and horses to elk, the better product you start with, the better the chance of a great end product. Not only does western Wyoming have big, deep fork bucks, but it also has some of the biggest does in the country, and we all know big mamas raise big babies. Another reason is the rugged habitat where these deer live in the summer and fall. The difficult access often makes these deer hard to hunt, so several bucks will reach maturity and grow antlers accordingly. Early hunting season can also contribute to more mature deer. With rifle season opening in mid-September and closing by early to mid-October, there is no hunting during the rut when the bucks are most vulnerable.

Regions G and H are the most popular and talked about deer units in Wyoming; however, there are other good units as well. Area 128 near Dubois has November hunt dates and limited tags, and units 101 and 102 of the Southwest Desert country have solid deer numbers and great vehicle access. Areas 87 and 89 in central Wyoming are also producing some good buck hunting with limited tag numbers and milder terrain than G and H. These can all be good hunts, but the downside is the number of years it takes to draw a tag. With over 1,700 non-residents sitting on maximum points in Wyoming for deer, these units can be almost impossible to draw for the next 20 years. The non- resident point creep is even starting to show in regions G and H with G regular taking 7 points and H regular taking 3 points to guarantee a tag.

Too many hunters is the biggest complaint I hear every year about regions G and H. There are only 400 non-resident tags given in G and 600 in H, but the resident tags are unlimited. This can lead to overcrowding in certain areas, often on opening day. With over 75% of both regions being public ground, you can usually get away from hunting pressure.

To increase your odds of harvesting a deer in western Wyoming, you need to be in good physical condition. As a Huntin’ Fool member told me a few years ago, “This is young man country.” Hiring an outfitter or guide to help is always a good strategy, especially if you are unfamiliar with the country. Renting horses has become very popular in the last few years as well to help hunters get their equipment and themselves into the backcountry.

“Sometimes it’s better to be lucky than good,” is a true statement when hunting mule deer. You can do everything right and be physically and mentally prepared for the hunt and still not find that trophy deer. Some of the biggest bucks ever killed in western Wyoming were stumbled upon or had been bumped by other hunters and were sneaking away for new cover. With all the hunting pressure in regions G and H, deer are moving and being displaced from their summer homes early in the season.

Everyone is looking for a trophy deer, and that is one reason that regions G and H are so popular with mule deer hunters. While there are some great bucks in this area, the realistic expectation should not be harvesting a record class deer. The average age of mule deer killed in the Wyoming Range in the last 20 years is approximately 3 years old, with 4-year-old or older deer making up about 20% of the harvest in that time span and a few giants killed every year. If a hunter is willing to work hard, pass on young deer, and maybe have luck shine upon them, they might be one of the few who harvests a big, mature buck.

The best way to decide if an area is right for you is to simply weigh the pros and cons. The pros of regions G and H are being able to draw every three to seven years, trophy quality bucks, a lot of accessible public land to hunt, and a three to four-week long season, including archery and rifle. The cons for these regions are public lands, physically demanding terrain, unlimited resident tags, intense hunting pressure (especially opening week), and lower deer numbers than objective.

Regardless of your past experience or no experience at all, the southwest region of Wyoming should not be overlooked if you are looking to hunt mule deer. If you are a self-guided hunter or even if you would rather go guided, the Wyoming Range will give you a great adventure and just maybe send you home with a buck-of-a-lifetime.