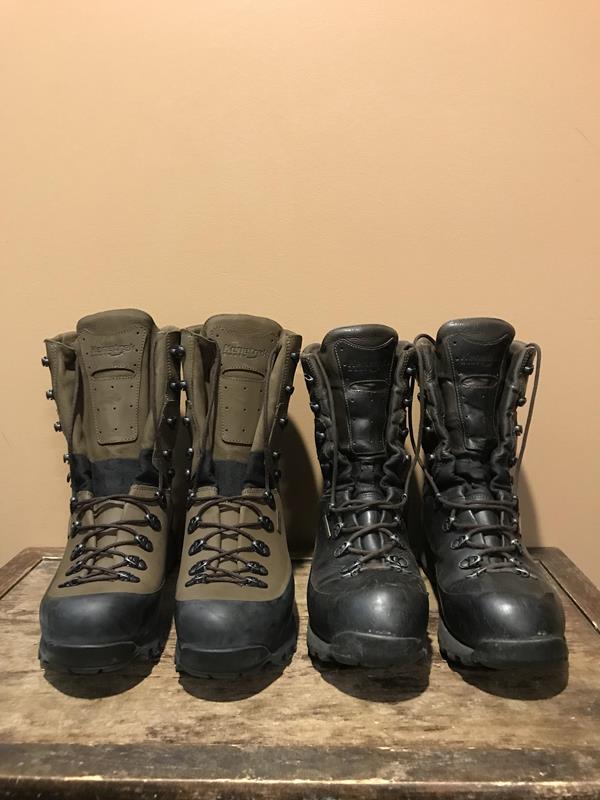 My boots have always been my number one piece of gear. Back when I was young and broke, there were four pieces of gear I would never skimp on – boots, backpack, raingear, and optics. Unfortunately, the rest of my gear was usually pretty poor, but I suffered through it. My dad was a long-legged walking machine, and I spent the better part of my youth following his boot tracks through the Nevada desert. He would impress on me how important it was to take care of my feet. He said it was just as important to break in my feet as it was my boots. He taught me to toughen up my feet by doing a lot of hiking in my boots before hunting season. He said no matter what the situation if I kept my feet in good shape and had some mental strength, I could walk anywhere I wanted to. That was great advice, and I am trying to pass the same lesson on to my boys.

There are many great boots on the market, and for me, choosing a boot comes down to comfort and durability. We all have different shaped feet, so it’s important to try on a pair of boots before you buy them. If high-quality boots can’t be found locally, they can be ordered online. Most companies are great about returning boots as long as they are not scuffed up, so I recommend wearing them around the house for a few days to see how they feel and fit. Remember, most of the better boots are going to be stiff and after they break in they will fit like a glove. Be cautious of boots that are extremely comfortable right off the bat. In my experience, these types of boots do not hold up and fall apart quickly when used in tough conditions.

In 2009, I purchased my first pair of Kenetrek boots. Since then, I have owned eight of pairs of Kenetrek boots, not counting the pairs my wife and kids own. I have trusted my feet to Kenetrek for many years, and they have not let me down. Their boots have hunted with me from Alaska to Mexico, and I have even taken them to Africa. In the summers, I fight wildland fires, and their boots are on my feet for each fire I am sent to. I average about 150 days a year wearing Kenetrek boots. I usually buy a second pair when the first are about halfway worn out so that I can have the new pair perfectly broken in by the time my original set wears out. My Kenetrek boots get used and abused, but I can usually get them to last about a year and a half. I have tried many other boots on the market, but most of them didn’t even make it through a fall hunting season.

Before the 2018 hunting season, I picked up two pairs of Kenetreks. The first pair was the Mountain Extreme in the non-insulated model. These are the boots I have been using forever. The other pair was the new Mountain Guide in the 400 insulated. Last season, I spent a lot of time in British Columbia before coming down to the states to finish my hunting season. The boots held up really well, which was not surprising. One thing I did differently last year was that I did not switch out the foot beds in the boots. In the past, I have taken out the factory foot beds and switched them to Super Feet. Kenetrek had redesigned their foot beds, and I decided to give them a chance. They were comfortable and performed as well as the aftermarket foot beds I had purchased in the past. I used the Mountain Guide boot during my late season hunts all the way through mountain lion and wolf season. I like the way the boot feels, and I think my next purchase will be the Mountain Guide in the noninsulated version.

Years ago, I bought a pair of their Grizzly Pac boots and they are still holding up great! I also have a pair of Kenetrek’s new Wildland firefighter boot. If you fight wildland fires, you should look into them. Without the GoreTex liners, the Wildland boots breathe really well in the hot conditions they get put through during the summer wildland fire season.

Kenetrek makes a lot of different boots, and they probably have something that would work well for just about anyone. I have owned the Mountain Extreme, Mountain Guide, Grizzly Pac, and Wildland Fire boots, and my wife has the women’s Mountain Extreme. They have worked really well for my family over the years. If you have any questions about their boots, give me a call. If you are ever in Bozeman, Montana, stop by Kenetrek and visit with the guys. Both of the owners are hunters, and they have a great collection of mounts that can be seen in the trophy room at the Kenetrek office.

Key Features of the Mountain Guide:


Key Features of the Mountain Extreme: