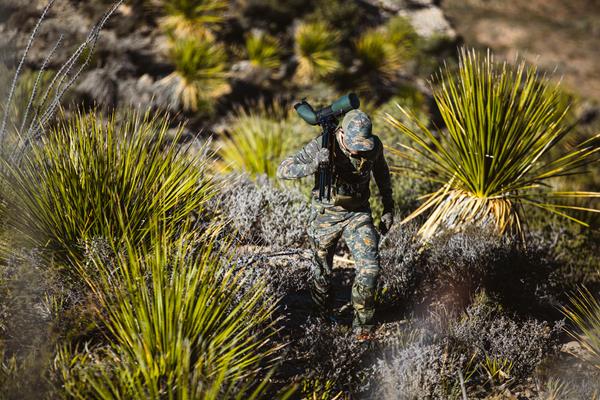 Now more than ever, avid sportsmen are looking for a domestic hunting adventure. COVID-19 has closed almost all international hunting destinations for the time being with no clear answer on re-openings. Look no further than the great state of Texas. Many people only think of whitetails when they think about Texas. They don’t think about mountains, and they don’t think about sheep.

Last November, I was looking for a mountain hunt to put our gear to the test. The harsh, mountainous terrain in the Chinatis would be a formidable foe, and I’d heard of guys hunting Barbary sheep (Aoudad) down there. I’m not talking about a high-fence hunt, but a true mountain hunt for free-ranging sheep.

I phoned my good friend and outfitter Greg Brownlee, and he said, "I've got the guy. I'm sending you down to hunt with Logan in the Chinatis." That's all I needed to hear.

I called Logan Lewis, and he said, "I hope you built your gear tough because the cactus and thorns down here will eat it up."

I met up with Logan in Marfa, Texas and headed south towards the Mexican border. Logan is a 28-year- old sheep guide, but you would think he's been guiding for 30 years. He put Lucas Nelson on the radio, and I immediately knew we were going to get along just fine.

We settled into the ranch house located near one of the few water sources in the ranch. It was picturesque just as I had expected it. It was a quaint little ranch house in the middle of the mountains with a Texas-sized fire pit and a dining table that could tell stories of Pancho Villa's raiders and the U.S. Cavalrymen who chased them. Trees only grow in the Chinatis along a water source, and the cottonwoods provided a glowing yellow canopy above us.
Logan had located a couple old rams two days before I arrived. He felt like they were both mature monarchs living out their final days alone, but we needed to get closer and put good glass on them. We planned our approach over breakfast and set off for the highest peak above the rams.

The Chinati Mountains were unlike any terrain I’ve ever hunted. The peaks and canyons are vast, and they’re covered with more varieties of cactus than I knew existed. Sotol and yucca plants dot the landscape as far as the eye can see. I was very thankful for the Kevlar on my gaiters. At first glance, you wouldn’t think animals could survive there. Its biodiversity of wild game is one of the largest in the country. Mule deer, elk, mountain lion, whitetail, javelina, bobcat, bighorn sheep, and aoudad all live in these mountains.

We couldn’t help but notice numerous caves along the mountain faces that have been used by the Native Americans for thousands of years. Recently, Logan discovered a painting in a cave that depicted a Shaman and his hunting scene, which was officially named “Logan’s Ladder” by the archeological team on site.

Cresting the summit, we spent the morning glassing the rams’ last known location but were unsuccessful. Just before noon, Logan located two rams across the range. We knew these had to be the same old rams, although they had moved down and around the backside of the mountain. Logan determined that we wouldn't be able to reach the rams until late in the day from this distance, so we loaded up in the trucks and moved back down. We were able to map a route that would put the wind in our favor and put us above them.

Working up and down the rugged terrain, we reached the base of our target mountain. Only one more climb and a lot of cacti stood between us and the sheep. We ascended the backside of the mountain and worked slowly up to the summit. The Alpine Light pants were performing with flying colors. The kneepads were an absolute savior on the rocks, and the CORDURA® Nylon face fabric was tough and durable.

Logan slowly made his way to the edge, but he couldn't see anything. I crept forward to help, settling myself over the rim. I settled my binoculars to find a ram bedded directly in front of me. He was laying in the shade of a Yucca plant.

After a mild panic, I realized I was too high for him to see me, although it looked like he was locked on to me in the glass. I backed off the face to try and locate the other ram. After several minutes, one of the guys located the other ram below the bedded sheep. We wanted to get a good look at both of them.

We were able to watch both sheep for over an hour, and we determined that the bedded ram was the older, heavier sheep. We got set up and waited until he stood up to feed. We had the element of surprise in our favor. The ram had no idea we were in his presence. He finally stood up and presented a slightly quartering shot at 200 meters. I aimed for the opposite shoulder and squeezed off the shot. The Barnes TTX hammered him, and he only ran a few meters before piling up.

I had just taken my first aoudad in Texas. We estimated my ram at 12 1/2 years old, and these sheep usually live to be 12-13 years old. He was the perfect sheep to take, and I was ecstatic as I slid my hands over his heavy bases. He was worn almost completely smooth from a lifetime of fighting.

We were able to reach Jason back at the ranch house over the satellite phone, and he arrived on a UTV with a Yeti full of ice-cold beer to pick us up at the base of the mountain. This saved us two hours of mortal combat with headlamps, cactus, and rocky Chinati terrain.

In true Texas fashion, we grilled tomahawk ribeye over a hot campfire while the West Texas stars lit up the night sky above us. I fell in love with those mountains, and I will be going back.

Our gear performed flawlessly. The Chamois Fleece Hooded Half Zip was breathable enough that it wasn't too warm and any perspiration brought on by the late morning sun was quickly wicked away. I hear there are Iranian Red sheep in those and the neighboring Davis Mountains. I see another adventure in our future!

CANIS GEAR USED ON THIS HUNT: