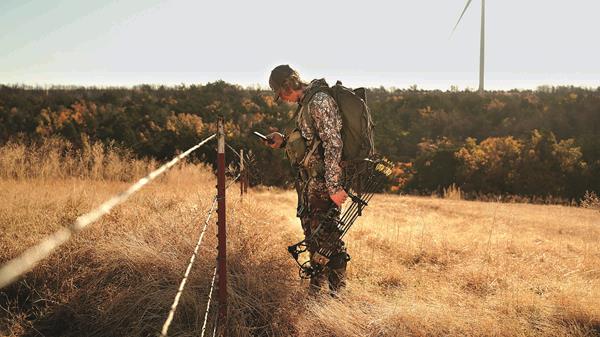 There’s a phrase familiar to New Englanders that says, “You can’t get there from here,” but that’s about as perfect of a summary as there is to describe the corner- locked lands issue hunters face in the West. For anyone unfamiliar with corner-locked lands, it’s when public land is inaccessible because private land touches its corner on two sides. To visualize this, imagine the four center squares on a checkerboard. If the dark squares represent public land and the light squares represent private land, you could not walk from one dark square to the other, even if you never set foot on private land in the process, because private lands touch the two public land squares at their corners.

2022 was an important and litigious year for corner-locked public lands. Many have likely heard about the four hunters who were cited in October 2021 for criminal trespass in Wyoming by corner-crossing from one public parcel to another using an A-frame ladder. They went to trial in April but were found not guilty.

Late last year, onX began taking a closer look at the millions of pieces of data it has from building maps for hunters for well over a decade to better understand the challenges people have accessing public lands. Building on the research it started in 2018 when onX found that in 11 western states there are 15.8 million acres public land owners can’t get to, the company focused more squarely on documenting public lands locked away at its corners.

In April 2022, onX released its “Corner- Locked Report” at www.onXmaps.com, which identified exactly 27,120 corners that blocked access to 8.3 million acres of public land across 11 western states because they were corner-locked in the exact manner described above. That amount of land is equal to 3.8 Yellowstone National Parks. Imagine being able to hunt that much more public land. It could give millions of people a lifetime’s worth of new land to explore.

HOW DID WE GET HERE?

The Public Land Survey System (PLSS) got us here, in part. The PLSS is the survey method developed and adopted to plat, or divide, land for sale or settling following the end of the American Revolution and the ceding of land to the U.S. by the Treaty of Paris in 1783.

In the West, plots of land were divided into 640-acre parcels shaped in perfect squares starting in the 1860s. Over time, these squares were divided in every imaginable way, either by the federal government subsidizing railroad construction by granting alternating sections of land on either side of the railroad track to the railroad companies or by newly formed state governments to establish parks, forests, and reservations. Many times, homesteads were sold off in bits and pieces by each new generation. The result of all this granting, ceding, reclaiming, and selling off over the last two centuries is how we got a checkerboard of public lands adjacent to private lands.

WHAT DOES THE LAW SAY?

That’s just it, there is no law on the books that clearly prohibits or legalizes the practice of corner-crossing. However, there have been multiple attempts to establish laws to define corner-crossing, but all have failed. This has left the decision to prosecute “corner-hoppers” in the hands of local law enforcement and local courts.

ARE PRIVATE LANDOWNERS THE ISSUE?

No, the reality is more complicated than that. Across the western U.S., there are 11,000 private landowning entities (both people and companies) that share a property corner with corner-locked public land. One-fifth of these corners are owned by oil, gas, energy, timber, and mining companies, dispelling the notion that this issue simply boils down to individual private landowners trying to keep the public out.

Landowners have valid concerns about corner-crossing, and part of onX’s “Corner-Locked Report” duly considers the landowners’ perspectives. Two of the most common concerns are centered on airspace and “bad apples.”
In regard to airspace, there’s an understanding that the airspace up to a certain height is also owned by the landowner. This understanding facilitates the building of structures and fences, and it has been used to ensure helicopters and drones can’t hover uninvited over someone’s house. By extension, since crossing a corner would mean a person inhabits the airspace over the connected private parcels, even if for a fraction of a second, it could be considered trespass as there is no minimum amount of acceptable trespass by law. Tapping one foot on private land is as much trespass as driving over that land without permission.

The “bad apples” who concern landowners are described by one anonymous rancher in rural southeastern Montana who has property next to public land, “If you had an individual that was trying to corner-cross legitimately and they had their map with them, they should be able to do it, but I think the problem has more to do with human nature. When nobody’s looking, people tend to do what they want to do. There are people who are totally respectful, but some bad apples really ruin it for the other people.”

Dealing with the bad apples is an enforcement issue according to this landowner and others in his position. “When you already can’t trust people, it’s hard to think that corner-crossing would go any differently. If we could get enforcement under control, then it’d be a lot easier to talk about trying to open up more public access. I know that there are vast amounts of acres that would be opened up if corner-crossing was legalized. If the idea was that it would somehow spread people out more, that would be a good thing, but we need to get enforcement under control.”

JUST HOW CORNER-LOCKED IS THE WEST?

Thanks to onX and its work from 2018-2019 with the Theodore Roosevelt Conservation Partnership (TRCP), we know there are 15.8 million acres of landlocked and inaccessible public land spread across 11 states, of which 8.3 million acres are corner-locked. 72% (5.98 million acres) of corner-locked parcels are locked in a checkerboard landownership pattern. The other 28% of corner-locked public lands tend to be patchwork and on the edges of larger units of public land, perhaps a resutlt of land being bought, sold, and swapped over the past 170 years. 70% of the inaccessitble corner-locked land is managed by the Bureau of Land Management (BLM). 26% is state lands, and the other 4% is other federal lands.

Of the 11 states facing this issue, Wyoming has the worst of it with 2.44 million acres that are corner-locked behind 8,159 property corners. These corners are shared with 1,200 unique landowners. This is due to the stretch of the largest railroad grant in history sweeping the width of Wyoming from east to west.

WHAT DOES THE FUTURE HOLD?

Parts of it are uncertain. Unlocking every acre of public land will not happen in our lifetimes, but there are successful programs that continue to work well for hunters and private landowners. On the most robust end, there are land acquisitions such as the ones the Rocky Mountain Elk Foundation have made. RMEF has purchased private inholdings that locked away public parcels and then transferred them over to the U.S. Forest Service.
Then there are the programs that give financial incentives to private landowners to open up their borders to hunters for access. Eight out of the 13 western states have such programs – Block Management in Montana, Access Yes in Idaho and Wyoming, and Open Gates in New Mexico, to name a few.

There’s also funding to find new solutions. The new version of the Land and Water Conservation Fund requires at least $15 million annually to be set aside for projects that improve public recreational access, and in the 2021 fiscal year, $67.5 million was appropriated for recreational access acquisitions.

onX is working to help in its own way. By 2023, onX has a goal to help secure or improve public access to 150,000 acres and help restore or build 150 miles of trails. It’s doing this through a grant program that awards nonprofits and stewardship organizations with up to $15,000 per project.

Until new laws are made or new lands are unlocked, there’s always the simple act of asking landowners permission for access. It may not work everywhere, or every time, or with every landowner, but there’s a history in the West of knowing one’s neighbors. As the population of these once-rural places grows, earning and building relationships with landowners may be the least expensive way to gain access to inaccessible public land.

Please visit us at www.onxmaps.com/.