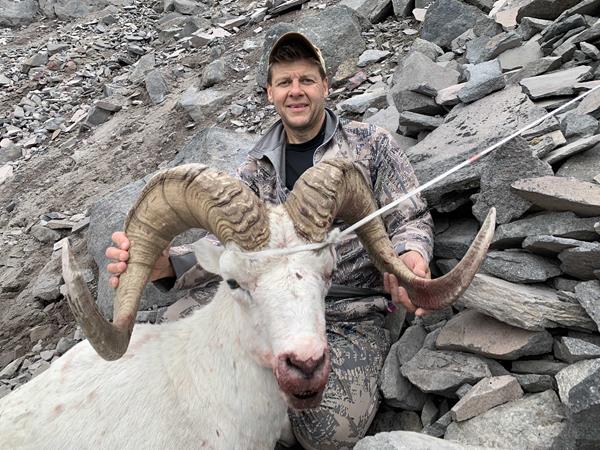 I missed! My heart sank as I watched the rams run away. As hunters, we sometimes miss. It happens, I kept telling myself. With all the hours spent at the range preparing for this hunt, did a miss have to happen on the most expensive hunt of my life?

My sheep hunt started in 2017 when my buddy, Paul, and I were finishing up a self-guided Alaskan moose hunt. We both took nice bulls and began planning our next adventure. Our first step was to begin researching Alaskan guides, and we settled on Gakona Outfitters, a referral by a family friend. Two years after we had begun our planning, we arrived at Gakona Lodge. The weather was good, so we took the opportunity to fly to base camp that same day. We booked the hunt for 13 days, if needed, but did not want to waste any time. Paul wished me luck as I squeezed into the Piper Cub with my guide, Chuck. Paul would fly out later that evening with Chuck’s son, Brian, to a different camp.

Chuck has been a bush pilot and guide his entire life, and I felt lucky to share his company. Together, we set up camp and prepared for the next day’s hunt. Going to bed that night in the mountain valley, I slept great in the cool air. The next day, we hiked up high to our glassing point on a ridgetop. In the distant mountains, we spotted two groups of ewes and kids.

“There!” I heard Chuck say. “Four rams! Two look to be shooters, and one looks really good.”

We moved to close the distance. During our hike, the rams were out of sight. We had no way of knowing if they’d be there when we got into range. As we peered over the ledge, the rams were nowhere to be found.

Disappointed, we kept pushing up the side of the mountain to try and pick them up again. Suddenly, Chuck dropped to his knees and whispered loudly, “Down.” I knelt, looking at Chuck, and he said, “They’re behind a false ledge.” I slowly eased up to look for myself. The rams were bedded, but we couldn’t get a shot. The contour of the terrain would not allow us to get any closer without them seeing us. We had to sit and wait them out.

As time dragged on, I kept making mental checks of my gear. I lay prone using my backpack as a stable shooting platform for my gun. After several hours, we could see the top of the horns of one of the rams. It was the smallest of the group. He moved to the right and came up into clear view. Ranging him, he stopped at 399 yards, well within my range. He moved away, and a second ram came up and stopped in the exact same spot. Again, I ranged him at 399 yards. He moved away and the third ram took his place. I heard Chuck say, “Not that one.” I went through the shot sequence in my head. I thought I knew what was going to happen next. This was going to be easy. Chuck whispered, “Here comes the big one.” I saw his horns come into view out of the left side of my scope. I was pointed right where the others had stopped. He started to move, and I readied for the shot.
Unfortunately, he didn’t follow the pattern. He walked right through my scope! I didn’t want to shoot at a moving animal at that distance. I looked up, and he kept walking. I felt like he was walking out of my life. Finally, he stopped. I was shaking as I tried to settle the crosshairs and hurried the shot. That takes us to the beginning of my story.

Chuck was optimistic. He calmly said, “Let’s just watch them. They don’t look that spooked.”

When they disappeared over the side of the mountain, I figured we’d never see them again. We hiked to a vantage point, and 20 minutes later, we were looking down into t he valley 2,000 feet below us. The rams were nowhere in sight. A sense of hope rose within me. If they had left our mountain, surely we’d be able to see them by now, even if they were miles away. The logical conclusion was that the rams must have stayed on our mountain. We moved along the cliff’s edge to the spot where they had disappeared, a large boulder field. The rams had settled on a small ledge immediately below the cliffs. A large boulder kept us hidden from the rams. I eased up the side of the boulder with my rifle ready and quickly found the big ram in my Leupold scope. I couldn’t believe it; fate was going to give me a second chance at this incredible animal. With one shot, he was down. An overwhelming feeling of emotions hit me. I gave Chuck a big hug and thanked him with a huge grin on my face. I knew the ram was something special when Chuck said, “This just might be the biggest ram I’ve ever seen.”
We had a lot of work to do. The shale rock was slick as ice, and we needed ropes to repel down to him. Breaking down the ram was difficult as both of us felt like we could slide off the mountain at any moment. We secured the ram and ourselves using mule tape to a boulder high above. Neither of us felt comfortable until we made the final climb off the side of the mountain.

The ram was indeed something special, netting over 170", and it was the largest ram ever taken by Gakona Outfitters. Not only did fate shine on me, but my buddy, Paul, was also successful, taking a 160" ram.

I’d like to thank Chuck and Gakona Outfitters for guiding me on such an outstanding hunt. I’d also like to thank my wife, Cindy, and my family for supporting me as I pursue my passion.