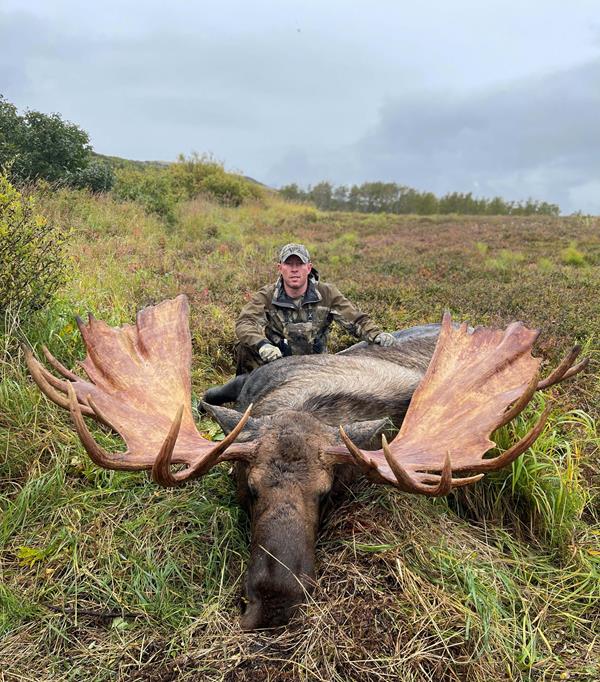 I was sitting on the edge of the meadow, watching the big bull bugle and round up his cows to head for the timber for their daily siesta, when an InReach message from Adam came across, saying, “I just shot your moose!” I had bailed on him, and our hunt a couple weeks earlier when a once-in-a-lifetime opportunity to hunt elk in Utah with my buddies popped up. I had zero doubt that Adam was going to kill a bull but couldn’t have ever predicted that he would be standing over a 73" giant on day one. As excited as I was for him, I couldn’t help but be a little jealous and second guess my decision.

In the end, I had no regrets as I had a phenomenal hunt arrowing a giant 375" bull on day five. That helped take the sting out of it a bit because 365 days is a long time to listen to your buddy remind you repeatedly about the moose you could have killed if you hadn’t ditched him.

Fast forward to a year later. With a second chance at the moose hunt, I was standing with Adam in his garage packing our gear for the flight out. The anticipation was high as he had flown the area all month, scouting, and located multiple bulls for us to chase. All we needed now was some cooperation from the fickle western Alaska weather and for the moose to stay put. This would prove tough over the course of the next five days as we battled suffocating fog, wind, and rain that just never seemed to break, and when it did, the bulls kept disappearing. Frustrated, Adam checked the weather forecast and decided that it was time to jump to a new spot.

After some drying out and repacking, we spent the next couple of hours flying. Adam had been in here scouting the week prior to me arriving and had found a “mega-giant” of a bull along with multiple other shooters to go after. It was unreal the number of moose we saw, and we couldn’t be more excited.

With the plane tied down and camp set up, we were now burning up the distant hillsides glassing for paddles to chase the following morning. Like a bad dream that wouldn’t end, we once again woke up to a thick bank of fog that consumed the entire valley and ended up lasting the better part of the day. Discouraged but optimistic, we sat in camp waiting for it to break.

On day two, we woke up to clear skies and a sense of urgency as we didn’t want to waste a single minute of this now clear weather window. Perched on our glassing knob, it wasn’t long before we had picked up a couple of distant bulls and then a big brown bear feeding on the bumper berry crop below us. Adam threw the spotter on the bear as he waddled across the tundra. He said, “He’s big.”

I replied, “No kidding, he’s huge! We should go kill him!”

Adam chuckled, “We can’t. We’re moose hunting. We gotta kill a moose first and then we can go chase bears.” Reluctantly, I agreed.

We continued glassing for moose, but I kept going back to the big brownie. Knowing that it wouldn’t take much to push my hunting partner over the edge, I said, “That bear’s still there.” I got a “Yeah, I know he is.” At that point, I knew he’d been watching him too. I said, “We could go kill that bear and then go moose hunting.” One more look through the spotter and I heard what I already knew was coming, “Let’s go get him!”

We took off, trying to catch up to the bear before he fed over the edge and into the thick river bottom. We barely made it to the bench and hastily got set up as the bear was about to disappear. Adam let out a fawn distress call, stopping the bear, and I let the shot fly. Instantly, we both knew it was back, and unfortunately, he was probably going to need a follow up.

Staring down into the dense tangle of alders, willow, and brush, Adam asked me if I’d ever gone in after a wounded brown bear before. I said, “No, have you?” He said, “Nope,” and at about that time, the bear growled, popped his jaws, and thrashed the brush just 25 yards below us. Fast forward 30 minutes to another growl and I was now going in after him.

To make a long story short, things got “sketchy” quick, ending in an adrenaline- filled couple of seconds. At just 10 yards, I found the bear lying on his trail, facing up hill, barely able to see the top of his back. With nowhere for me to go, I fired a shot through the thick brush where I thought his vitals were. He exploded, growling, spinning, and then charging at me. I quickly fired a second shot, hitting the big boar square in the center of his chest, dumping him in his tracks at just 6 yards.

With the bear hunt now over and heart rates back to normal, it was time to concentrate on moose again. Before I even had my tripod unpacked and my binos out, Adam said, “Got a big bull.” Bedded across the drainage a mile and a half from us was a really nice 60+ incher with great fronts and a 5" droptine off one side. After a short calling sequence, he disappeared into the brush. We decided to drop down and cross the drainage to see if we could relocate and make a play on him. We spent the remainder of the day calling and glassing, but he was a no show. With a 9' brownie in hand, we hiked back to camp in the dark and made plans for the morning hunt.

Daylight met us with clear skies as we were perched on our glassing knob once again, scanning the valley. Not long into it, I spotted a big bull walking across the same hillside from the day before. After putting the spotter on him, it was easy to see it was the same bull that had given us the slip. He was moving with a purpose, so we quickly loaded up and mapped out a path to hopefully cut him off.

We opted to set up for a long-range shot instead of trying to cross the river valley again and potentially losing him a second time. We picked up the bull working across the hillside, going in and out of the thick alders and willow brush. He disappeared into a small patch of trees that he had no way of getting out of without us seeing him. With the distance ranged and the gun dialed, I locked in on the last tree, waiting for him to walk out.

Several long minutes passed when Adam suddenly said, “How did he get over there? Look, 300 yards to the right. He’s going through the brush. No way he got over there without us seeing him. Wait, maybe that’s a different bull. It looked big whatever it was.”

Shifting to the right, I picked up the bull just as he stepped out of the trees. Adam let out a cow call, and the bull swung his head, looking our way. Adam blurted out, “It’s the mega- giant. Kill him!” The bull started walking again, grunting with every step and swaying his massive rack from side to side, heading in the direction of the other bull still hidden in the trees. I asked for a range and quickly dialed it. Adam let out another cow call, stopping him once again. I settled in on the point of the bull’s shoulder, exhaled, and squeezed off the shot, dropping him in his tracks.

After riding out a week of bad weather, I had just killed a 9' brown bear and a giant moose in less than 24 hours. Once we were at the bull, we were both overwhelmed by the sheer size of him in every capacity, knowing he was truly something special. It’s so often overused, but this was really one of those “once-in a-lifetime” type of animals, an absolute dinosaur of a bull.

Adam couldn’t wait to bust the tape out on him. In the end, he measured an incredible 75 1/4" wide with a score of 243", placing him well over the All-Time B&C book minimum score with plenty of room to spare.

I couldn’t have been happier with the bull or the bonus brown bear and how things turned out. I was blown away by the selflessness of my hunting partner as we both knew this was his number one bull and he didn’t hesitate to tell me to shoot it when it stepped out.