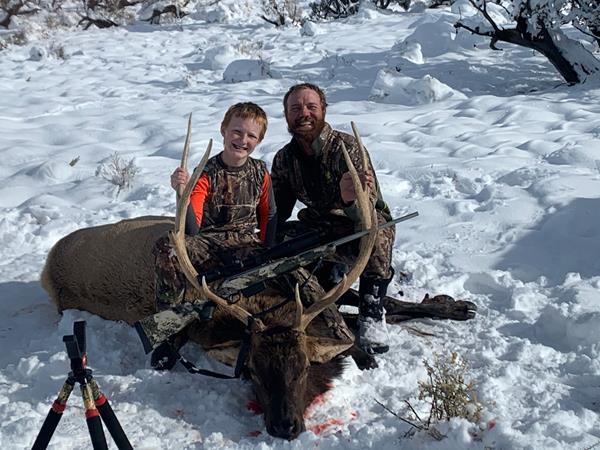 On a very unfortunate day, my family received a call that no family wants to hear. We were told that my grandfather was having heart problems and needed to have emergency surgery. That year, he had drawn a unit 10 Arizona bull tag for the late season hunt, but after his surgeries, he realized he wouldn’t be able to go on this hunt. We were very surprised to hear about the heart issues because my grandpa, Gary, who is a retired law enforcement officer had always kept himself in shape and was still hunting at the age of 77.

When he realized that he wouldn’t be able to go on this hunt, he went to Arizona Game and Fish to see if he could return the tag and get his points back. When he talked to them about the situation, they said that they could not give him his points back because he hadn’t purchased the PointGuard. They told him that he could transfer the tag to a grandchild between the ages of 10 and 18. I qualified for the tag, so he decided to transfer it to me.

As we started to find more about the hunt, Grandpa told us that he had a buddy named Dan who knew the area well. Grandpa said that he had invited him to go on the hunt with him. We got in touch with Dan, and he decided to help us on the hunt since we had never hunted the area before and knew nothing about elk hunting in Arizona.
When it came time to leave for the trip, we heard a huge snowstorm was coming, so we packed up and prepared for the worst and hoped for the best. As we left Colorado and drove towards Arizona, we went through many storms. On the way to camp, we had to plow through big snowdrifts with my dad’s truck. Thankfully, we made it safely.

With two to three feet of snow around us, we couldn’t go further than one mile from camp for the first couple days. Not seeing any elk around camp, I started to get discouraged and I got homesick as well. I knew I had to push through and stay positive. Dan had a secret spot he knew about that most of the time had elk in it, but we just couldn’t get there.

Once we had some good sunny days, there was enough snowmelt that we could make it to this spot. We arrived at the spot at about 7:45 a.m. and started to glass. As we glassed for a bit, my dad finally spotted something. It was alone, so we knew it was likely a bull. Dan pulled up his spotting scope and put antlers on the elk. We knew with the conditions it was now or never, so Dad and I started out after him. Dan had some pretty bad knee problems, so he wouldn’t be able to tag along on the stalk, but because he had his spotting scope, he was able to watch the whole thing happen.

We got over the small ridge, and my dad threw up the binos just in time to see the bull going behind a hill. There were two hills that were probably about 40 feet apart that lead to this big opening he was headed towards. We got set up, hoping the bull was going to come through the opening and I would get a shot off. About 20 minutes later, the bull walked into the opening.

My dad said, “Looks like a nice 5x5, better than anything I’ve killed.”

This excited me. As the bull grazed along, we started to realize he was not going to come into the opening like we had hoped. As he disappeared behind the other hill, we knew we had to rush and try to get in front of him for a shot. As we got towards the crest of the hill, we realized that he came out into an opening where we may get another chance. As we got toward the top of the hill, we were trying to get in front of him. However, the bull had changed direction and was now standing in a group of trees within rifle range. As my dad threw down the Bog- Pod, I took the rifle off my back and quickly put it in the U-shape on the Bog-Pod. I asked Dad for a range, but he couldn’t get one on the bull, so we had to guess. I aimed for 300 and squeezed the trigger on my 6.5 Creedmor. Boom!

“Did I hit him?” I asked my dad as I was a nervous wreck.

He said words that I will never forget, “You smoked him, buddy!”

We thought he was only a 5x5, but as we walked up to him, we realized differently. He was a broken up 6x6, and I couldn’t have been happier. Dad asked me what I would call him, and I said “Grandpa Bull.”

Thanks to Dan for the help and Grandpa for the tag. I would also like to thank my dad for teaching me to hunt, for the rifle, for the motivation, and for everything else he did on this hunt.