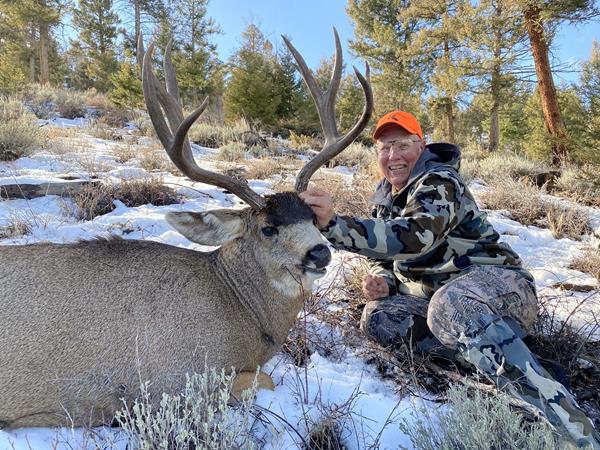 After 27 years, I was going to Colorado for a mule deer hunt! Life, work, and other hunting opportunities found me sitting on a pile of Colorado deer points. A health issue was the deciding factor, and it pushed me to apply for a coveted deer tag. A call to Logan Hodges at Huntin’ Fool quickly had me dialed in on a fourth season rifle tag.

I had a busy fall planned with a Colorado elk hunt as well as a Wyoming antelope hunt with my wife. Unsure of the COVID situation as well as my health, my good friend, Dennis Wille, offered to tag along and help on this hunt. We arrived in the unit a few days early to do some scouting. An early snowstorm had provided decent third season results, and we were optimistic that it would only get better as the rut progressed.

The first scouting day dawned clear and cold with some snow on the ground. Perfect! We spent the day driving the unit and learning the area. We checked out areas recommended by other Huntin’ Fool members. Unfortunately, as the next few days continued, a warm front moved in and melted most of the snow as temperatures rose to 60 degrees at 9,000 feet. It was nice weather for a vacation but not what you want for those coveted late season deer tags.

As the weather warmed and more hunters arrived, we saw fewer and fewer decent bucks. We continued to check out previous areas and search out any new country. Due to the warming weather, the roads and trails became more difficult to travel. Checking in with a few other hunters revealed the same scenario. There was just not the number or quality of bucks we had expected.

As in any hunt, when the challenges arise, you just put your head down and hunt a bit harder. We dug into the high country. We checked rougher country. Every day, the rut continued to strengthen. We were seeing plenty of bucks, just not the quality we were looking for.

On day four, we got a break with a bit of snow and cooler weather. I passed on a good 4x4, and then as the day went on, we had those regretful moments that haunt us all.

Later in the day, we returned to an area that held a good number of does. A heavy 4-point was trailing one of them. After a short deliberation, we agreed he was as good a deer as we had seen. At the shot, he took off running through a small group of aspen trees. Clearing the trees, I shot twice more and the buck went down.

Walking towards the buck only made him seem larger and heavier. He was beautiful with some stickers and great mass. A few hours of photos and skinning and we were ready for a downhill pack.

Thanks, Dennis, for the years of friendship and assisting on this hunt. Great memories!