Better Than I'd Hoped For 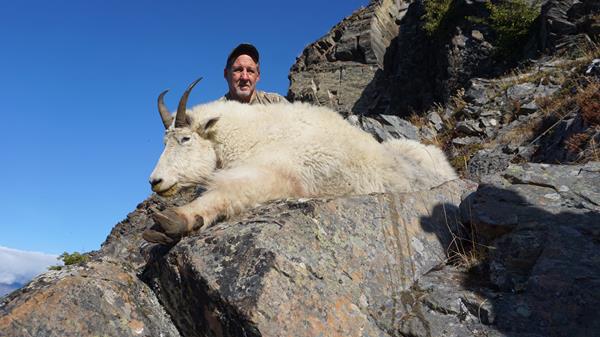 I’ve been intrigued by Rocky Mountain goats since I was a kid, and this hunt was the third time I had held a tag for one. The first one was a just in case the opportunity presented itself tag on a Roosevelt elk hunt in British Columbia. We didn’t see any goats that were accessible on that hunt. The second tag was on a mountain goat hunt in northern British Columbia that I won in a Rocky Mountain Bighorn Sheep Society raffle. On that hunt, I ended up killing a great Canadian moose that took a couple of days and then the weather got bad for the rest of the hunt and we were not able to hunt goats. The third tag was for this mountain goat hunt in Alaska with Dan Montgomery’s Alaska Trophy Adventures.

On August 29th, I was picked up at the Anchorage Airport by my guide, Hank Flatow. We drove to Jim’s house where I met the other hunters who had just returned from their successful sheep hunt as well as the other goat hunters who were heading to various camps the next day. After dinner, we repacked our gear for the flight to camp the next morning and hit the sack.

After breakfast, we headed over to Dan’s landing strip where we shot a couple of rounds through our rifles to ensure they were still sighted correctly. Once everyone was satisfied with their rifle, Dan began ferrying us to the glacier camps. He could only take one passenger at a time, so it took a while to get everyone out to the various camps.

Dan and his crew had already set up camp, so all we had to do was get situated in our tent and enjoy the rest of the day. While we were sitting in camp getting acquainted with each other, we watched a goat pass by on a nearby ridge. It was a young goat, but it was still exciting to see.

Since we had great flying weather on the 30th, we were in camp with an extra day before the season opened. We spent the day close to camp enjoying another beautiful day and anticipating opening day. When we woke up opening morning, it was overcast and a little windy. We woke up early, ate breakfast, put on our crampons and packs, and got ready to hike across and down the glacier to where the goats were. We were anxious to get going, but we had to wait until it was light enough to safely work our way across the glacier.

The hike from camp to the base of the glacier was about two or three miles. Along the way, we spotted a couple of goats, but they were not in any accessible areas, so we continued down to where they are usually more accessible. As the day progressed, the wind started picking up, but we were seeing goats and didn’t really think much about it. None of the goats we were watching were accessible, and we spent the rest of the day hunkered down, waiting for them to move. No luck. Meanwhile, the wind had increased significantly and was blowing 60 or 70 mph. Hank said we better head back to camp before it got too late.

We worked our way back up and across the glacier towards camp. By the time we got close to camp, it was dark and the wind was really whipping. As we reached “camp,” there was no camp. We could see that the wind had destroyed our tents and blown our gear away. We rushed to gather as much as we could find. Luckily, we found two small two-man tents that hadn’t blown away. Hank took charge, and with Mike’s help, they got one of the small tents set up and had Steve and me get in it. Then they handed us all of the gear we had been able to find, put the other tent up, and tied it to the one we were in. Hank and Mike climbed into the second tent, and we split the gear between the two tents. Hank had called Dan on the Sat phone and let him know the situation, but he was unable to fly due to weather conditions.

The next day, the wind continued, but it did let up a couple of times and we were able to search the glacier for more of our gear. Every time we had a break in the wind, we let Dan know. He tried to fly in three or four times that day, but the breaks in the weather just weren’t long enough. That evening, he airdropped us some food, sleeping bags, sleeping pads, and other necessities to make us a little more comfortable until he could get in and land.

When the weather finally let up the next day, Dan was able to fly in and ferry us out. He brought us back to his home where we showered, ate, and dried our gear. In the interim, Dan and Hank set up a new camp on the glacier. They flew us back to camp, with Hank staying behind to guide a sheep hunt. Steve had to return to Chicago for work, so I ended up back in camp as the only hunter with a new guide, TJ Bertek, and our packer, Mike Gray.

On September 4th, we woke up to a pretty nice morning. We geared up and headed back down to goat country. At around 10 a.m., we spotted the goats under the edge of the glacier, and one of them was huge! They weren’t accessible where they were. We knew that eventually they would have to move to eat, so we settled in and waited and watched. They moved out of sight, but we knew they had to still be there.

In the meantime, three billies came down into a little bowl on the other side of the ridge we were on. They were about 320 yards away. I wanted the big one, but the three were solid, mature animals and very tempting. It was also getting later in the day. I told TJ that if the goats we were watching didn’t start moving in the next 30 minutes, I was considering making a move on one of the three smaller goats. TJ wanted me to continue to wait for the big goat. Luckily, about 15 minutes later, the goats under the glacier reappeared and started moving our way.

It was late in the day, but we set up in a spot where we thought they would pass below us on a trail just above the cliff, hopefully before dark. It worked! About 30-45 minutes before dark, the big billy passed by on the trail about 120 yards below where I was set up. As he passed below, I had a small window where I could get a shot at him. As he entered that window, I took the shot. When it hit him, he spun around and I immediately shot him again. He promptly jumped over the edge of the cliff.

We worked our way down as far as we could and found a good blood trail where he had gone over the edge, but it was too dark to go after him. I knew I had hit him good both times, but we couldn’t tell where he ended up. We decided we would go back up to a flat spot we had found to spend the night and try to do the recovery in the morning.

September 5th dawned a beautiful sunny day. We headed back down to where my goat had gone over the edge. TJ tied off a rope to some brush and climbed over the edge of the cliff. After what seemed like forever, TJ popped back up. He was smiling! He said my goat had gotten caught in some brush about 60-80 feet down the cliff. After much discussion, TJ and Mike convinced me to climb down the cliff to my goat.

Once we all got down the cliff, we managed to get my goat pulled up onto a flat rock and tied off to some brush so he wouldn’t accidentally drop the additional 150 feet down. He was huge, better than I had hoped for.