All On My Own 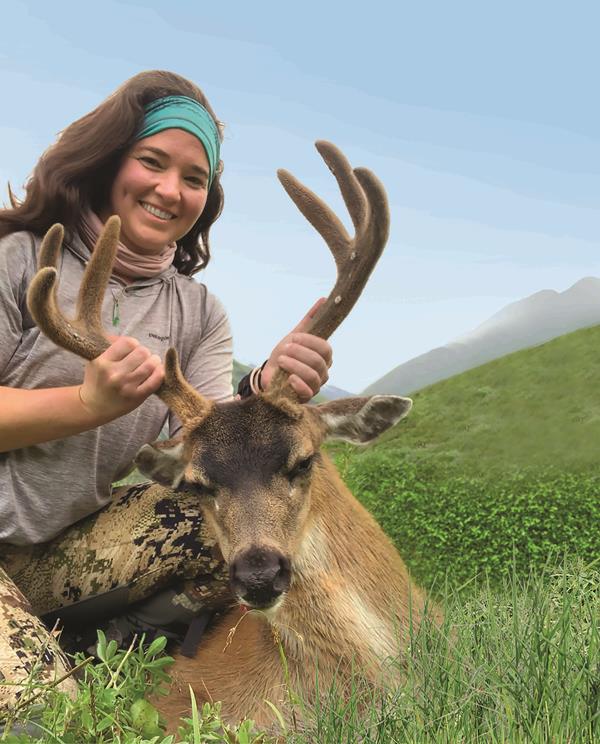 It was a cold and dark day in Alaska in January when I decided to do a solo hunt. I’d hunted before, being a falconer, bird, and game hunter, but I had never attempted a solo hunt. I knew this would be an opportunity to test my skills, hone my knowledge, and hopefully have a great time out in the field.

I am lucky enough to be surrounded by experienced hunting friends who looked over my plan and gave advice when asked. I made calls, created Excel spreadsheets, and went to the range, all the things you do to help ensure a good experience. This hunt was to be my capstone of the summer and to celebrate the long journey of finishing up my first book, a 300+ page book about biking for women.

I called up an air taxi that I had selected to drop me off at a remote alpine lake on Baranof Island, Alaska. He was a mix of excitement and dread as I told him I wanted to be dropped off for a week by myself in bear country at a lake I could (and did) get weathered in at.

The time came for the hunt, and as you can imagine, I was filled with excitement and apprehension. Could I really pull this off? Was I really ready? As we passed beautiful peak after peak, my heart was pounding with anticipation. We finally got to my lake, cresting over a hill and circling in for a landing. As the plane floated off, the last words were, “Let me know you’re OK on the InReach tonight!” That was it as he floated away and I watched him take off to his next client.

I made camp and bushwhacked up to the top of a hill where I could glass and make my plan of attack. The next morning, I got up around 4 a.m. and packed my gear. I had a weather window, and it was an opportunity I didn’t want to miss. I got an early start, and as I was nearly at the peak of a hill, I looked across the valley and saw a nice buck. I watched him feed and said to myself, “That’s my buck.” I quickly changed my plan and descended the mountain only to cross a river and head back up another mountain. Climbing a scree field and crossing mounds of thorny berry bushes, I controlled my heart rate, reminding myself that I just needed to calm down with words a friend had told me, “You have time, so take it!”

I slowly crested the mountain, and the buck was gone! I thought I had missed him. Maybe the wind had shifted and he smelled me. Suddenly, across the valley, there he was bedded down, staring my direction. I lay down and loaded my rifle. I glassed him and got a good yardage, 182 yards. It was my shot. I waited patiently, ok maybe impatiently, for him to stand. When he did finally stand, I took my shot. He took one step and fell. I can’t really describe the feeling I had knowing I had just accomplished something I had planned and worried over for six months.

I started the cleaning process, noticing the clouds starting to roll in and my weather window closing. I took my time and processed him there on the mountain. Texting my InReach friends excitedly, I said, “Deer down at 7:18 a.m.” I carefully boned everything and took the heart and hide, looking around at the scenery as I did. The pack was heavy back to camp, and by the time I got to my last trip down the mountain, my weather window was completely gone. It was raining sideways as I slipped my way carefully down the now wet and slippery rock. I slept with that meat right next to me in the vestibule and watched it rain as I was stuck in my tent for the remainder of the trip.

As the plane floated up to me, I had tears in my eyes, beaming with pride over my buck. I didn’t even care that it was a big buck, it was mine and I had worked hard to get it all on my own. The pilot looked over and said, “I’m proud of you.” These were words I was thankful and happy to hear. It’s hard to put into words the feelings I had of being alone out there, completely self-reliant, and the small details of the hunt that we as hunters all know well. In the end, as we took off with my deer, meat, and camp in the plane, the only thing I could think of with a smile on my face was, “I can’t wait to come back here again next year.”