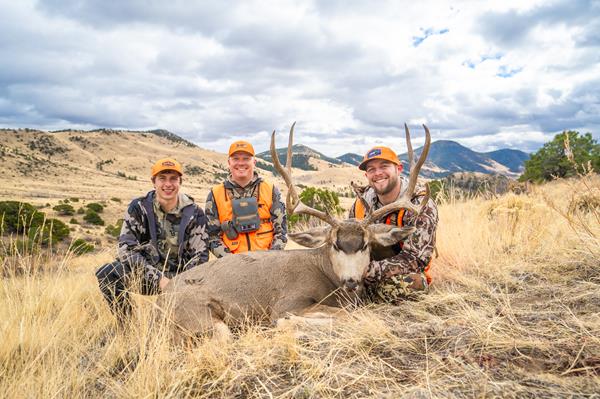 While recently interviewing candidates to join our team, one individual asked what the culture was like at Huntin’ Fool. The panel of coworkers immediately smiled as they shared their thoughts about their job. They mentioned how our team feels like family, one that we can lean on for anything. We each shared that it’s easy to want to be a part of a team that’s so passionate about what we do day-to-day. Even more interesting was that three of the four individuals on that panel are non-hunters, and one of those three has been with the company for 10 years. I believe it says a lot about our company when one of our longest employees still looks forward to her job each day, even after a decade! The point is that they don’t have to enjoy pulling the trigger to be happy working at Huntin’ Fool. Instead, they are fueled by our team’s fire for the brand, for their love of the outdoors, and for having the privilege to help our members’ dreams come true.

The part that really made me proud was how they described the lack of egotistical behavior among our Hunt Advisors. I’d have to agree! There’s a humble energy among those guys, regardless of the fact that they consistently notch tags across the country each year. In 2021 alone, 9 Hunt Advisors covered 13 states and 16 species with over 520 collective days in the field. You won’t see an ego attached to that, which I appreciate because, unfortunately, many hunters make it a competition. I tease the Hunt Advisors about getting photos of their success because several of them make it a low priority and rarely post to their own social channels. They don’t care about the praise, and they continue to represent hunters in a positive light. I’m proud to be a part of that!

All that being said, I’d like to reflect on the last year and show our members some of the places where our team has had the opportunity to travel and hunt. It’s this boots-on-the-ground experience that makes the team so valuable. In fact, all Hunt Advisors are asked to hunt at least two new units each year in an effort to expand their knowledge. While those guys are undeniably the heart of Huntin’ Fool, every employee that makes up our team of 25 is encouraged to get outside and hunt if they desire to do so. From meat hunters to trophy hunters and everything in between, we encourage everyone to fill their cup and keep this lifestyle alive. If there’s a chance to get in the field, you’ll find that someone at Huntin’ Fool has taken advantage of it, and if they don’t have their own tag to fill, it’s not unusual for them to help someone else fill theirs. Let’s take a look at each of their adventures!

Robert continues to dedicate a lot of his time to the tags that his boys get each year, who are arguably some of the luckiest out there! In 2021 alone, the Hanneman boys chased speed goats in Montana, elk in Utah, and caribou in Alaska. If those three didn’t keep him busy enough, he managed to get some hunting in for himself and successfully guided some clients as well.

2021 Worst Moment: The mule deer hunting was rough across multiple states this year

Garth covered a lot of territory this year, from Alaska moose and black bear to California pigs, and of course, he had to squeeze in some mule deer hunts throughout the season. He’s no stranger to killing mature bucks, and he makes it a point to hunt Colorado every year.

2021 Worst Moment: Setting cameras in the summer and shooting his Utah deer in the fall only to find his target buck on camera the very next day. Ouch!

Logan spends much of his time helping our members find landowner tags and does a pretty fine job at it! He was able to help one of our License Application clients notch a Colorado tag after 27 years of applying, and Logan also shot great bucks in Idaho and Colorado this year. He has two boys who love to hunt, so they get out as much as possible as a family.

2021 Best Moment: Having his boys archery hunt on their own for the first time and they killed two bulls without Dad

2021 Worst Moment: Not having his dad with him to experience any of the best moments

Every year, Austin spends the first part of his season in Alaska guiding hunts that he can’t afford himself, with 2021 being his 12th consecutive season. He’s also the King of filling tags in the shortest time possible, which is evident by his success photos. This year, to top it off, he was able to get his daughters out to hunt, making it extra special.

2021 Best Moment: It’s a tie between shooting an elk with one daughter and a Gould’s turkey with the other

With two babies under 3 years old, Stanton spends a lot of his time hunting close to home to be with them. He got lucky and drew an antelope tag with only 2 points and then slipped away to Colorado where he shot his biggest buck to date. On top of being a full-time Hunt Advisor, Stanton plays a huge role throughout application season by helping our incredible License Application team check the clients’ choices to make sure they align with their hunt strategy.

2021 Worst Moment: His truck breaking down while scouting for antelope and having to get it towed off the mountain

The older Jerrod gets, the more he finds joy in being with others as they pursue their tags, and most would agree that he’s the best kind of hunting buddy. With that being said, he still found some time to hunt for himself in Arizona, Alaska, Idaho, and Montana over the past year. He prefers to exclusively bowhunt and tends to make it look easier than it is.

2021 Best Moment: Being with his oldest boy, Jake, when he killed his buck in Montana

2021 Worst Moment: Four out of six hunters making it to Kodiak without their weapons and then weather delays for two full days while trying to leave Kodiak

Isaiah had a stellar year with some really special tags in his pocket, making it a season to remember. He started off with mountain goat in Alaska and later connected on a great bull in New Mexico. On top of that, he spent his time chasing blacktail, mule deer, and black bear tags of his own while helping buddies fill their tags in between.

2021 Best Moment: Having a mountain goat hunt in Alaska

2021 Worst Moment: Spending a week archery hunting in Montana and not hearing a single bugle

Eric spent the majority of his archery season guiding elk hunters in Montana. He was also fortunate enough to be on a Nebraska Governor’s sheep tag with a Huntin’ Fool member. That harvested sheep is arguably one of, if not the biggest, rams killed in 2021. He also had a good friend draw a Montana sheep tag and was able to get some boots-on-the-ground experience with him too.

2021 Best Moment: Accompanying a good friend on an awesome auction sheep tag hunt in Nebraska while witnessing first-hand a true success story in its sheep conservation program over there

2021 Worst Moment: Forgetting to check before sitting down in a hurry (more than once) to glass while hunting in cactus country

Braxton spent most of his fall season guiding in New Mexico for elk and antelope, totaling eight bull pack outs in a few short months. Other than some flyfishing on the Yellowstone River in the summer, he dedicated most of his time in the mountains to clients. However, he drew an aoudad tag earlier in the year as well as one of the most coveted elk tags in New Mexico and took a great bull.

2021 Best Moment: Harvesting his target bull for his own tag in New Mexico

2021 Worst Moment: Living off DayQuil on the last two pack outs from being so sick

From CEO Jerrod Lile: When I asked Jessica to write this article, I instructed her to include herself, but in typical Jessica fashion, she was too humble to do so. As a result, I’m writing this section for her as a surprise. Jessica’s favorite hunt of the year is always with her dad in New Mexico, where once again, she killed a great bull on a solo self-guided hunt with her bow. She also got to witness her dad killing his first elk with a bow on the same hunt. In addition to New Mexico, Jessica also hunted Utah’s general archery season and Texas. While she’s not busy slinging arrows out of her bow, Jessica works with all of our industry partners to ensure that we can share the incredible new gear they innovate each year. She also happens to bring a ton of positive energy to the building each and every day with her 100% Team Huntin’ Fool and Huntin’ Fool members outlook on life.

2021 Best Moment: Being with her dad when he finally got his first archery bull after seven years of chasing elk together

2021 Worst Moment: Hurting her shoulder and having to switch to shooting right-handed a week before her New Mexico archery elk hunt