What OTC Archery Deer Is All About 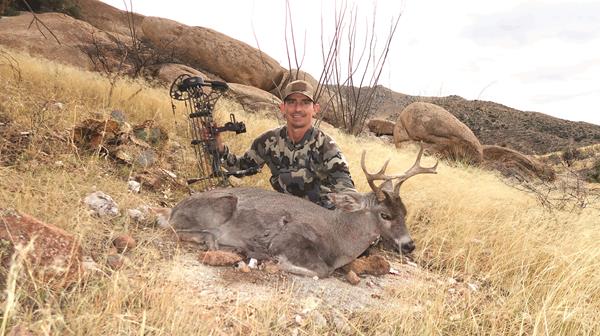 Arizona has had over-the-counter archery deer hunting for as long as I can remember. It has always been underrated in my opinion, but it has been picking up more attention in recent years which has spurred discussions to make changes for 2022. Typically, the number of tags sold for OTC archery hunts from the 1980s to 2017 fluctuated between 20,000 and 25,000. Then in 2020, that number shot up to over 30,000 tags sold and units and seasons were dropping from the program. Local bowhunters were frustrated with the reduction in options and set out to find solutions to this problem. They came to AZGFD with some proposals, and with some fine tuning, they found a possible solution that will have its inaugural year in the 2022/2023 season.

2022 marks the first year that there will be a quota system put in place for units that can be hunted with an over-the-counter non-permit tag. There will be a separate quota for mule deer and Coues deer in units with good populations of both. In those units that are almost entirely made up of mule deer, an any antlered deer quota will be in place. Most of the units will have three archery seasons that can be hunted (August/September, December, and January), but a few units only have one or two hunts available, so you will want to pay attention to season dates within the unit you are looking to hunt. A big positive to this change is that some units that had certain seasons removed or had been removed all together from the OTC program have been added back to the mix for the 2022/2023 season, but these units have a very conservative quota put in place to guard against overshooting their harvest goals for that unit. This means the quota could possibly be filled before the later seasons take place.

Until now, the only harvest reporting for deer has been voluntary and most years unreliable, so the quotas for most units are very conservative for this 2022/2023 season and will likely be modified in future years. Due to this, some, if not many, of the units could be closed due to the quota being filled during the earlier seasons. This year, hunters will want to have multiple backup plans and be flexible in the unit they plan to hunt, especially if they are planning on hunting during the December or January seasons. For instance, unit 6A in 2021 showed 89 mule deer bucks and 37 Coues deer bucks were harvested, so the 2022/2023 quota is set for 25 mule deer and 20 Coues deer, which in theory could fill up before the first archery season is over. One more prime example is unit 20A. In 2021, there were an estimated 246 mule deer harvested, so the 2022/2023 quota is set at 75, which is only 30% of the number of deer harvested in 2021. As I said before, though, the harvest reporting system in place during the 2021 season was all voluntary and could have been off by a fair margin. In 2019, the estimated number of mule deer harvested was only 88 in 20A, which seems highly speculative to fluctuate that much from year to year.

When selecting units and going through options, one thing to keep in mind is that the northern-most OTC units will have the highest chance of filling their quotas during the first season. Most resident hunters will opt to hunt the cooler climates of northern Arizona than go out day after day in central and southern Arizona in 110-degree heat. Also, most of the Coues deer harvest has historically come from the later December/ January archery seasons, so once they start rolling in December, you will really want to pay attention to how close the units are to reaching their quotas.

The way the quota system is designed to work is very similar to their quota system for bear and mountain lion. Once the season opens, successful hunters will have to report their harvest within 48 hours. Once the harvest quota has been met in a given unit for that species (any antlered deer, antlered mule deer, antlered Coues deer), that unit and species will close at sundown the Wednesday immediately following. This will be very important for non-residents traveling to Arizona for a five to seven-day hunt. Basically, every Thursday will be like opening day of a seven-day hunt in units where the quota has not been filled. When it comes to the later hunts, when open hunt areas become more scarce, pressure will undoubtedly increase in any remaining open units. Successful hunters can report their harvest by calling 623-236-7961 or filing online at www.azgfd.com/ArcheryDeerReport.

One thing this new quota system is going to drastically change in most units is outfitted hunts during the December and January seasons. These hunts have really picked up over the last five years on both private and public lands as good outfitted hunts have become harder and harder to find. We do not quite know how these hunts will be conducted, if at all, but the only for sure outfitted hunts that could be booked at this point will be the first week of the first season. If you are in the market for one of these outfitted hunts, give us a call. We are constantly in contact with the best outfitters in Arizona for these hunts and will have more information as we start to see how these hunts unfold.

With this being the first year of this new quota system, inevitably there will be some unforeseen complications that will arise and need adjusting. One potential problem we already envision is the need for in-person check-in for all harvested deer. We feel that quota systems without this can be easily manipulated one way or another and that could cause premature closures. For now, we are excited that AZGFD is trying other avenues to continue the OTC archery deer program and giving people an opportunity to continue to get out and enjoy the outdoors. The best advice we have for potential hunters for this first season is to have multiple units in mind and be flexible in either your hunt dates or units when planning your OTC archery deer hunt.