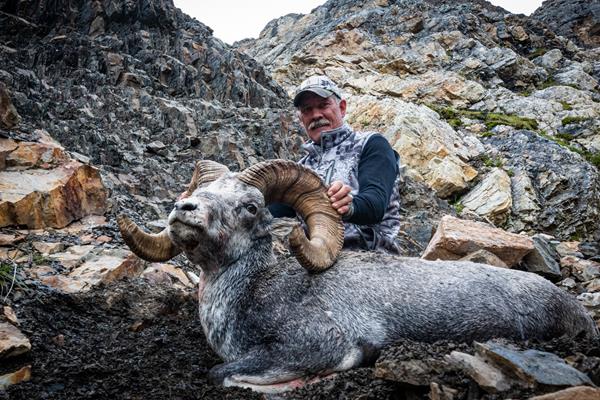 North American sheep hunting is an exciting, exhilarating sport that requires a number of sacrifices, including that the hunter be in top physical shape. However, success rates vary tremendously in sheep hunting, depending on the species you choose to hunt, i.e. Dall, Stone, Desert, or Rocky. We’re speaking of your probability of success, of which Stone sheep hunting has a lower probability. When you’re at the Sheep Show talking to an enthusiastic outfitter or booking agent/consultants, they can make it sound simply like a matter of paying the freight, finding a date, and signing up. It is not!

Typically, a hunter goes on his first sheep hunt and enjoys the experience tremendously, and then he wants more. When a hunter decides they want to pursue all four North American sheep species, they have made a life-changing decision. This goal for an individual will cost them more than they know, not just monetarily. It’s a passion!

We are writing this article to caution “new” sheep hunters that they need to be realistic and cautious about hunting Stone sheep in British Columbia. Besides costing $50,000 (and increasing) for a U.S. citizen to hunt, your odds of success on a single hunt may be less than you think. “It is not uncommon for a hunter to take several very expensive Stone sheep hunts in BC before taking his ram.”*

The above quote is from an interesting and comprehensive article about Stone sheep hunting written by Mike Bodenchuk, Editor-at-Large of The Hunting Report, in the May 2016 edition titled “Hunting Stone Sheep: Finding Success in a Changing World.” It is an honest article about the changing demographics and factors that might contribute to your not being successful on a Stone sheep hunt.

“The largest Stone sheep population is located in British Columbia... For practical purposes, Stone sheep hunting is limited to Canada, and all non-Canadian/Americans must be guided. BC created an outfitter concession program in 1949, [which] restricts the number of rams an outfitter can take (harvest). Outfitter areas are restricted and only the registered outfitter may take paying clients into an area, EXCEPT this exclusivity does not apply to British Columbia residents, who can hunt on the same land and much of the current situation is the result of increased resident hunting.”* Additionally, “Many hunters report the presence of unguided hunters... Indeed, you may ride horses into the wilderness for several days to get to your sheep camp. But, that doesn’t mean that a resident didn’t hire a float plane and beat you to the mountain.”*

The demand and supply is an interesting aspect of Stone sheep hunting. There is a significant pressure in many areas from resident hunters because they have the incredible opportunity to hunt them with easily accessible tags and at a cost that we in the lower 48 would consider equal to your home state’s deer license. Who would blame them for hunting them every year? The balance of the tags occurs as they are allocated to the outfitters for non-resident/US hunters in a very strict system that gives each outfitter a finite number of tags. Resident hunters, with open access, harvest well over half the Stone sheep in BC.**

Stone sheep have been going through a transition, which is causing some interesting dynamics that you should be paying attention to. First of all, there aren’t as many of them compared to the other species, and they are only located in a relatively small region. If you are serious about only harvesting a Stone sheep and would not take a Fannin*** sheep instead (currently qualifies for a Stone sheep by those who keep records), you have painted yourself into a limited number of options. You must book with an outfitter who provides hunting opportunities for them or you could move to British Columbia and become a resident. Moving there and becoming a citizen may be your cheapest option!

Believe it or not, it is legal in British Columbia for an outfitter to sell more hunts than his BC government allocation. The government allows the outfitters to allocate more non-resident hunters than their allocation, reasoning that statistically many hunters don’t fill. For example, if an outfitter is allocated eight tags and they have four hunt periods during the season, it’s logical that they would divide them up according to their resources, history, and knowledge of the area. If they historically have a 60%-70% success ratio, they often bring in 12+/- Stone hunters. Those of you who paid attention to the last sentence might be wondering, but what if I’m on the last hunt and the tags are already filled? We don’t have first-hand knowledge that this ever happens, but the market is ripe for this to be an issue. One of the co-authors experienced a Stone hunt in BC where the outfitter later admitted to having only seven or eight tags, yet he had signed up 15 Stone hunters for the same season! While in the base camp, the hunter observed multiple resident hunters spike camping and hunting directly on the mountains to be hunted.

In summary, Stone sheep are gorgeous trophies, and today, they are probably the most difficult sheep to harvest (on a single hunt), as well as the most expensive of the four North American sheep to hunt. “If you still want to hunt Stone sheep, keep your eyes wide open.”* Do your own research, don’t trust an outfitter/agent/consultant, and talk to all recent past hunters, particularly the unsuccessful ones. Also, with the challenges of easily accessible tags for resident hunters in BC and the strictly limited supply of tags allocated to outfitters, the cost of Stone sheep hunting is almost guaranteed to rise in the future. Good luck!

Sources Cited:
*The Hunting Report, May, 2016, “Hunting Stone Sheep: Finding Success in a Changing World”, article by Mike Bodenchuk, Editor-at-Large.
**Hunter Harvest Data/Results for Stone Sheep, 2015 to 2017 (2018 data not yet complete). Received March 21, 2019; Wildlife and Habitat Branch, Ministry of Forests, Lands, Natural Resource Operations and Rural Development, Victoria BC
***A realistic alternative to hunting Stone sheep in BC would be hunting Fannin or Stone sheep in the Yukon. The population is smaller, although the opportunity to be successful on a single hunt is much greater, and the prices are usually significantly less. Yukon residents can hunt yearly, but there is only a population of 33,422 residents versus 4.4 million in BC, both with similar land masses.

Footnote: Hunting Rocky Mountain bighorn sheep in BC and Alberta can be another challenging, low risk probability hunt. For example, in the Summer edition of Wild Sheep, Summer 2018, Hobson Reynolds reported final success in getting a California bighorn in BC, acknowledging that this was seventh attempt for a Rocky or CA bighorn in both British Columbia and Alberta. Both provinces’ areas allow unguided resident hunting. Buying one of the five Governor’s tags in Wyoming has become a realistic alternative with its high success rate.