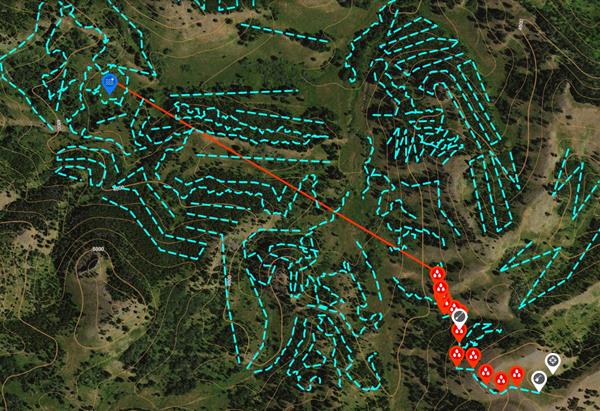 If you spend enough time hunting, you’re likely to be confronted with one of the most heartbreaking scenarios a hunter will ever be faced with – failing to recover a marginally hit animal. With it comes the ensuing decision of whether or not to “cut” your tag and call it a hunt under the assumption of a lethal hit. I was reminded of how difficult of a decision this can be when a buddy hit a bull on an archery elk hunt this fall. While the choice wasn’t mine to make, I spent a lot of time trying to decide what I would do had I been in his shoes.

After hunting a big herd bull for a couple days, we were able to sneak within range of him, and when the bull stopped broadside, my buddy took the shot. We had both lost the arrow in flight and were unsure of exactly where the hit was. We gave it some time before taking up the blood trail. First blood, some of it lung blood, began 50 yards from the hit, and upon seeing it, we both assumed that it was a fatal shot. After another 300 yards of tracking, we recovered the arrow which had pulled all the way through the bull and clearly showed bubbles on the fletching. It was just a matter of time before this bull would be recovered. Or so we thought. We had no idea that in only another 150 yards we would find the last drop of blood on this trail. The next three days were spent grid searching the entire area in search of the bull, ultimately to no avail.

A decision needed to be made at that point to continue hunting or consider the likelihood that the bull may not have survived the shot and call it a hunt. In this case, as we first stood over that blood, I assumed that the bull would not be going far. After three long days of searching, I now suspect he ended up surviving the shot. My best guess is that it was a high one-lung shot, a hit a bull will sometimes survive. So is one decision or the other the correct one? I’m honestly not sure. I don’t think there is a black and white answer when a hunter is faced with this difficult decision. For what it’s worth, my personal opinion is that if I’m sure an animal will not survive the shot, my hunt is over. If I’m not sure the shot was lethal and I gave my best effort to recover the animal, I’ll probably continue hunting. That being said, it’s always going to be a situational and personal decision and the best I can do is use all the information at hand in making my decision. My advice would be that if you find yourself in this situation, have an honest conversation with yourself and make the decision that you think is right and is one that you can live with. It’s a tough call, but it’s one we’ve got the obligation to make as thoughtfully and ethically as possible while working it over from our own unique perspectives and past experiences.