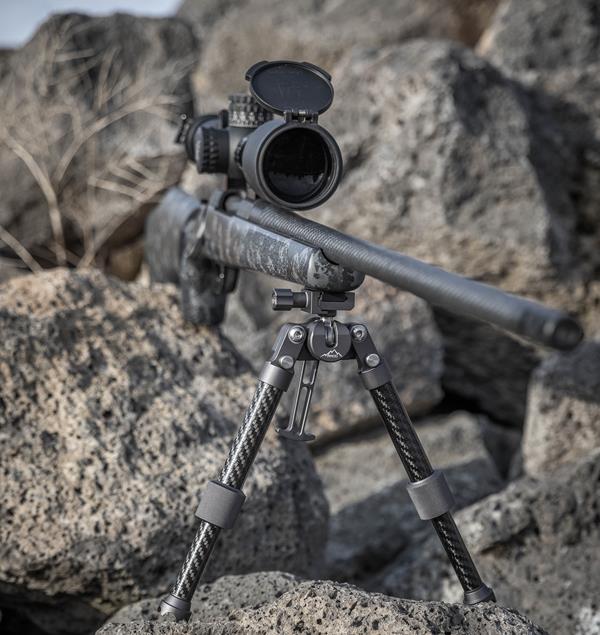 As hunters, we are always researching new gear and trying to find products that can improve our success in the field. We know that a good pair of properly fitting boots or having the right backpacking gear can make all the difference between a miserable hunt and a comfortable one. I have learned over the years that this applies to a rifle setup as well. With having young boys entering the hunting world, I wanted to find a shooting rest system that would work well for them and increase their success, thus increasing their confidence as hunters. I have purchased many different bipods and tripod rests over the years, but I had yet to find one that was consistently comfortable on various hunts. As a young hunter, my dad always told me to take my time, never rush my shot, and make sure I had a good rest before shooting at an animal. Honestly, I am quite sure I would have more trophies on my wall if I would have heeded his advice as a kid. I am haunted by a couple of big bulls and bucks that I missed due to rushed shots. I really wanted to make sure my dad’s advice was well instilled in my boys at an early age. This led me on my journey of finding a good rest system.

In 2017 on Connor’s mountain goat hunt in Washington, my good friend, Calvin Halladay, brought his lightweight long- range rifle. It had the Extreme Bipod and Rear Support System on it. I had looked at the Extreme pod and rear rest before, but this was the first time I was able to use them. With the system, Connor was able to get extremely comfortable in the prone position and take his goat with one well-placed shot. When we got home, I purchased the Extreme pod and rear rest because I felt it had worked so well.

The Extreme Rifle Bipod and the Extreme Rear Support System have been on our guns for every hunt since that mountain goat hunt in 2017, and I feel that our one-shot kill success has improved significantly. I recently upgraded from the Gen 1 bipod to the Gen 2 bipod as they made some improvements to the original.
If you have any questions on the Extreme Gen 2 pod or Extreme Rear Support System, give me a call. There are also informative videos on the @ExtremeOuterLimits YouTube channel that explain how they both work.

Once I figured out my shooting rest system, I wanted to develop a system around it to teach the boys to shoot better than their old man. The rifle they shoot is a Christensen Arms Summit TI chambered in .300 Ultra mag with a Nightforce NXS 5.5x22 scope. They are shooting a 230 grain Berger bullet at 3000 FPS out of their rifle. They also have a Sig Sauer Kilo 2400 rangefinder that is programed with their gun’s ballistics.

My uncles used to get a kick out of watching us kids get pounded from our rifles, and I grew up being afraid of the recoil. I decided not to do this to my boys. Instead, I taught them to get used to their hunting rifle by dry firing it hundreds of times throughout the season, practicing in different shooting positions, including the prone position. Each time they must move the rifle to a different target to practice adjusting the Extreme Pod and Extreme Rear Rest Support System. They have only ever shot this rifle at animals. When they shoot at the range, I have them shoot a lower recoiling rifle for practice.

Another thing that used to mess with my mind growing up was shooting at longer distances. I can remember getting ready to shoot at a buck at 300 yards and my uncle telling me to hold a foot over the deer’s back. To solve this dilemma for my boys, I put a Nightforce scope on their rifle and taught them how to range and dial their turret. This way, they never have to hold over on an animal. They have complete faith in their rifle, and all three boys know that bullet is going to land right where they had the crosshairs.

In the last five years, my boys have killed 28 different animals with their rifle setup. Of those, 90% have been killed with one shot from the prone position. Their shots have ranged from 100 to 550 yards. The biggest key to their success has been being able to get prone in a comfortable position and having the support from the Extreme Bipod and Rear Support System.

We all work so hard to have an opportunity to get a shot at a trophy animal, and when that time comes, we need to do everything in our power to make a good, clean kill. For us, it is taking that extra time to get a good, solid rest to make that first shot count. It is better to pass on an animal than to take a poor shot and end up missing, or even worse, wounding an animal. Fortunately, with advances in technology, we are in a better position to do that than ever before.

Here are some of the features that I really like on the Gen 2 pod and rear rest support:

For more information, go toruggedridgeoutdoorgear.com or visit their retail store at www.extremestore.us.