Taking the Waypoint on a Predator Hunt 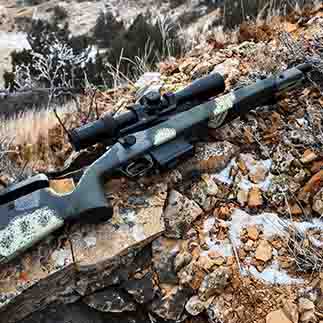 For many shooters, winter is kind of our “off-season” where at times there is so much snow or it is so miserably cold outside that we stop shooting for a couple months. Yes, we can all go to indoor ranges and continue to hone our handgun skills, but what about maintaining our craft with rifles? Not everyone is an ice fisherman or wants to join a bowling league, so what can you do? I dress up like the Michelin man and brave the cold to go predator hunting. It can teach you many things. How do you layer properly for warmth? How does your rifle react on an authentically “cold bore” or first cold shot? How does your rifle’s accuracy change from 70°F in the summer to 10°F in the winter? How well can you call your own wind when you are in a sea of white snow?

There are a lot of lessons to be learned venturing outside in January and February to touch off a few shots. To add even more purpose to that, I specifically go varmint hunting for fox and coyotes to curb predation on local ranchers’ cattle herds and to ensure the health of my own local whitetail deer population.

Depending on what region of the United States you live in, you can donate the predators you harvest to organizations like “Hides for Habitat” where pelts are used for conservation efforts, and in some situations, there are organizations that will repurpose those pelts into clothing for those in need. You simply need to do a little digging to find these smaller organizations, but in the end, your unrelenting pursuit to maintain your rifle prowess can have a lot of benefits to local wildlife and your community at large.

This winter varmint season was unlike any other because I had the opportunity to tote along the new Springfield Armory Model 2020 Waypoint chambered in 6.5 Creedmoor. I was stoked to take such a lightweight, mobile rifle out into the field with me as in previous years I had used a significantly heavier rifle that I always dreaded carrying.

Before I got ahead of myself, I needed to sight-in my rifle that was topped off with a Vortex Diamondback Tactical 4-16x44mm FFP scope. The Springfield Armory Waypoint touts a 0.75 MOA accuracy guarantee out- of-the-box, and it easily achieved that with Federal Varmint & Predator 6.5 Creedmoor 95-grain V-Max ammunition.

Springfield’s accuracy guarantee coupled with the impactful Federal ammo was comforting to me because once I go out into the field hunting, I always want to be a good steward of the outdoors and make humane shots on game. I had tremendous confidence in my rifle, optic, and ammunition going into this hunt.

The area I headed out hunting in was the Little Missouri National Grassland in the extreme western part of North Dakota. This part of the state has numerous bowls and valleys with snow-capped precipices jutting out from clay rock formations. It is a beautiful but unforgiving region of the country in the winter. The hillsides and buttes were gorgeous to view from inside a heated truck but soul-crushing to climb a half mile up to “get the high ground” on some fox and coyote.

I situated myself over large ravines and valleys that allowed for shots out to 500 yards, which would be easy work for the Waypoint 6.5 Creedmoor. Using the Hornady Ballistic Calculator and inputting all the pertinent data related to my rifle, I would only need to dope my elevation 2.3 MRADs (mil-radians) at 500 yards, which is not much at all. Also, knowing the rifle shot under 0.75 MOA while sighting it in, I was confident that if a shot opportunity presented itself, I could take it.

Over the course of three days hunting around 10 hours each day, the cold was harsh and the wind was even harsher. We ended up only seeing one porcupine and one coyote who met his demise from another hunter in our hunting party. The local ranchers were thankful that we harvested at least one coyote during our stay because that meant one less predator would be harassing and harming their calves come spring. We later learned that a mountain lion was harvested mere days before our arrival and that maybe contributed to us seeing so few coyotes during our hunt. We believed it definitely played a factor.

Out in that region of North Dakota, ranching is a common way of life to provide for a family monetarily and through raising your own food. Our efforts might have seemed meager for our troubles, but they were incredibly thankful nonetheless.

Throughout the weekend of hunting, I gained a strong appreciation for the Springfield Armory Waypoint because even when it was fully equipped with a silencer, optic, loaded magazine, and sling, it was incredibly light as a package when we were walking multiple miles a day during our hunt.

For those who are in the market for a lightweight, long-distance hunting rifle or even a superbly accurate target rifle, the Waypoint is it. Give it a look and customize it to your liking. As always, be safe out there, and happy shooting!

Please visit us at www.springfield-armory.com.