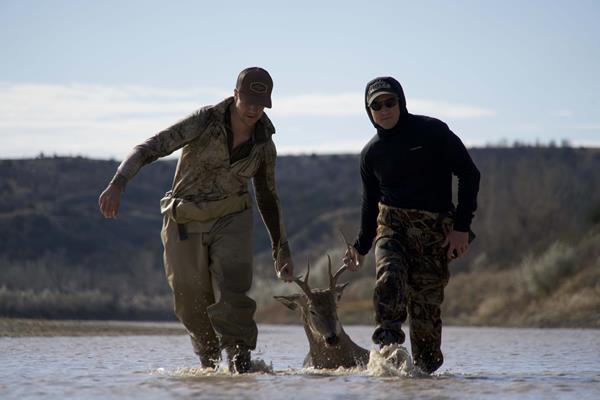 The saying goes, “10% of the hunters kill 90% of the game.” A year of training, scouting, and flinging carbon was put forth to make my way into that 10%. This was my year to make it happen.

I was down in the dumps from my 2017 season so far. I got my butt handed to me by elk, deer, and a bear I had been chasing for the last 20 days in the backcountry. It was time to switch up the animals I would be chasing and hopefully change my luck. It was time to hang up my worn out treaded hiking boots, air out the tent, give my backpack a rest, and recover my lungs with some lower elevation hunting. It was time to chase whitetail.

My buddy, Joe, had reintroduced me to chasing whitetail the previous year. It had been some 25 years since I had sat in a stand, waiting for the always skittish, air-sniffing whitetails to walk on by. That first year back in the stand taught me that this style of hunting was just as hard as any high-country hunt, perhaps not as physically hard, but it was certainly just as much a battle of wits.

This year, I went into the whitetail season with the anticipation of any man in desperate need of redemption. I had to prove to myself that I was still a hunter, not just an outdoor enthusiast taking my bow for a walk. I wanted to kill, and I wanted to do it of my own accord.

The plan was that Joe and I would head up to South Dakota the weekend before our nine-day hunt and hang some stands, do some scouting, and see how the animals were recovering from EHD. The truck was packed as we sped out of the frigid temps that had sneak attacked Denver from the north. We had some areas in mind that we had hunted the previous year. We’d hang some stands in those areas as a backup plan, but our ever-adventurous minds had pushed us away from the familiar and into some unexplored areas.

We pulled up deep in the night and rolled out the sleeping bags in the bed of the truck. Lights out.

Waking up to frost on my pillow and snot frozen to my face had me wondering why I was so cheap and didn’t just get a hotel room. It was time to get glassing. The deer had obviously made a comeback. We saw more deer that morning than we did in all of the nine-day hunt the year previous. Plans were made, and stands were hung in the regular haunts. We sat and ate some lunch as we prepped ourselves for the evening sit.

The area we were about to walk into probably hadn’t seen a hunter in years. It was only a mile or so off the road, but more importantly it was denser than a tropical forest during monsoon season. We crossed the river and peeled the waders off. We made a plan to meet at this spot at the river at dark. Like two explorers at odds, we headed off in opposite directions, looking for our lost city of gold.

I took the riverbank as far as it would let me before I was forced into the jungle. As I stepped in, I saw tunnels in the brush that the deer were using as arteries to maneuver the complex webbing of tangled mess. I crouched down with my stand, pack, and bow in hand and crawled along like I was taking fire from a hostile force. I wondered how I was going to get a clear shot even if I saw a deer in here. It was either sit in the river or advance into unchartered territory.

I pressed on, seeing fresh sign and knowing this was a haven from the madness. I spotted a few trees that had the potential of holding my 150-pound frame. Gear was thrown to the ground as I stared the tree up and down, looking for the best spot to attach myself to it. I was used to crawling up 13,000 foot mountains to creep up on elk, not lashing myself 15 feet up to a twig waving in the wind. I hauled the last bit of gear up to my stand as I looked for the nearest bush to launch myself into in case all went wrong. I settled in and exhaled. Silence.

This was why I was here, to get a bird’s eye view of the deer sanctuary from my reconnaissance stand and to breathe it out from the ever-increasing pressures of life. My mind started to wander when I was suddenly snapped out of it from the consistent crunch of leaves. It was not the quick scamper then sudden stop of a squirrel, but the methodical crunching of a four-legged animal with the plan of going from point A to point B. I peeked over my right shoulder. Thirty-five yards away and closing came a rack with brown fur carrying it. I had spent nine days in this deer-barren state last year and saw a few does for the effort. Now here came a respectable deer no more than 30 minutes into my sit. Luck doesn’t make sense. It’s not supposed to, but you seize it when it shows itself.

I told myself to stay calm, not move, and see what he did. He did what any smart deer would do, he walked away. I reached down for my buck grunt and tried to remember what those guys in all those terrible whitetail shows would do. A few grunts came out of the call, and through the wall of brush, I could see the buck pull a U-turn. He wearily came within 15 feet of my stand in one of two spots that I could get a shot off. Luck struck again. He locked up and just stared that million-mile stare, as if contemplating some deep quantum physics calculation. Ten minutes went by and then fifteen. He just stared off into space, not offering me a shot.

I reiterated to myself to stay calm and not move. He came back to and turned to walk the direction he had come from and offered me the perfect opportunity. I raised out of my seat and spun. My bow came up, and I drew at the same time. He had no idea that death was standing 15 feet away from him. As the arrow slid through him, he still didn’t know. He walked off 20 yards and fell over like a title boxer taking an unprotected shot to the jaw. I was dumbfounded. This happened to guys on TV shows, to first-time hunters, and to people who pay insane money to hunt in high-fence operations, not to me. I’d come to expect my kills on the last hour of the last day of the hunt, not the first day of the scouting trip for a hunt that was supposed to take place a week later. I almost didn’t bring my bow into the woods on this little foray.

I was happy and sad all at the same time. On one hand, I had just taken the only whitetail buck of my life. On the other hand, I knew I’d be missing hunting camp with my buddies the following week. I contemplated this as I walked back to the predetermined meeting spot with Joe. I broke the news to him when he asked if I had seen anything. I answered by holding up my phone with a picture of the buck and me that I had taken no longer than 30 minutes ago.

Joe broke the silence of the woods, “Congrats, man! Now you’re going to need to find another tag for next week.”

As we walked back to start the process of turning my deer into meat, I replied, “Nah, maybe I’ll stay home and put in some more work. It’s my busy season after all.”

He looked at me with a raised eyebrow. “Right…” came his reply, not hiding that he didn’t believe a word I was saying.

By the time we were out of the woods, I was already looking up other archery over-the-counter tags in neighboring states.

“Time to join the 10%ers,” I said to myself as we pointed the truck west.