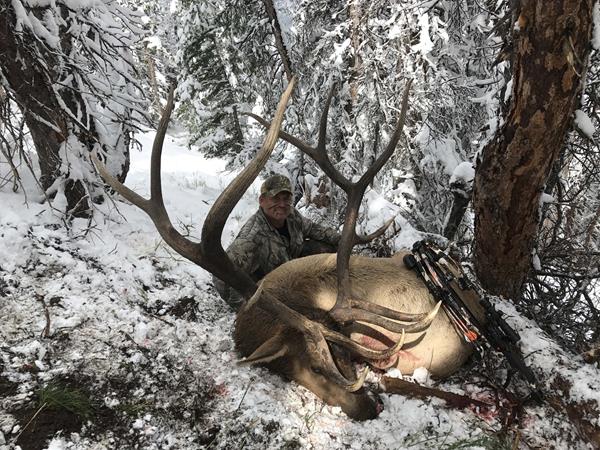 Hunting has always been one of my greatest passions, but I wasn’t fortunate enough to grow up in a family of big game hunting traditions. Growing up in California, I didn’t have the opportunity to hunt big game as a lot of friends of mine did. I had to satisfy my appetite for big game hunting through reading stories in Outdoor Life and Sports and Field and watching movies. I’ve hunted all over, including Africa, Alaska, and Canada, and I have taken some extremely wonderful trophies. I’ve been very fortunate, but out of all the hunting I’d done in the western United States, I’d never been fortunate enough to cross that holy grail of that magnificent animal.

After checking my points, I realized I didn’t have enough to draw in Wyoming, so I decided to buy a Commissioner’s license. Later, I got a call from my good friend and hunting companion, Thomas Baker, whom I had hunted with for over 20 years. He explained to me that he and Tre Heiner of Washakie Outfitters had found a very unique area for elk. He was extremely surprised at the sheer number and size of the bulls. The license I had allowed me to hunt this area. The deal I made with Thomas was that I would buy a crossbow and come for the rut, and then if I did not kill a bull with my crossbow, I would come back for the rifle season.

Come September, I showed up at camp and there was another gentleman named Ryan Ringer from Oregon who met us at the trailhead. The trail ride in was about 12 miles and took us about three and a half hours through a lot of rough country. We got into camp and got all set up and ready.

The next morning, we got up and it was about an hour and a half ride to where the elk were and where Thomas wanted to hunt. We got up on a rock face and looked across the canyon, and we had five or six bulls bugling all around us. We had a huge bull skylined right behind us, and Thomas told me to get my bow ready. I had a bull in and was ready to go, but nothing happened there. He never came in.

There was one bull that they had tried to get on the previous hunt. Thomas explained that it was always in the same spot, but it would only come out about five minutes right before dark. Some mornings they didn’t see him at all, and other mornings they would just barely get a glimpse of him going into the timber with his cows. However, this morning at 9:00, Thomas looked across the canyon and there was the bull. He had about a dozen cows with him. Since we had bulls coming up behind us, Thomas told me I had better make a decision. He said it was probably a 370"+ bull coming in behind us and I could shoot it if I wanted. However, I decided we were going after the other bull because of his sheer size. With how massive he was and how far his main beam went back towards his rump, I just knew that was a very special bull.

Thomas said, “Let’s bed him and then we’ll ride around the canyon, get up above them, and wait for him to come out to see if we can kill him this evening.”

We bedded him down at about 11 a.m. and then got on the horses and rode around through the cliffy country and some bog areas. We made it to the top and got set up right above the elk. I was just getting ready to take a bite of my sandwich when Thomas said the elk were on the move. This bull was pushing his cows into some deeper timber. Thomas grabbed the horses and told me to get over to him when I could. He said we’d make a plan and get above them and maybe get him that evening.

We went over and got set up, and it looked like a pretty good spot. There was a nice saddle, and it looked like we could get close. We waited about two hours, but nothing happened. Then, the weather came in and it started to get foggy with a bit of rain and snow. At about 4:00, we decided to get out of there and head back to camp. We got back about half an hour after dark. I got ready for the next day, had a nice dinner, and went to bed.

The next morning, we woke up to a whiteout. We were pretty much fogged and snowed in. It had snowed six to eight inches the night before, and it was pretty apparent we weren’t hunting that day. We did some camp chores and just kind of laid around all day.

After a day of rest, the third day came around. Thomas and I decided to trail right back over to where that bull was and see if we could locate him. This time, we were looking at a white hill in six inches of snow, so it was really easy to pick up the elk. We got over there, and Thomas picked up the bull in about five minutes. This time, instead of waiting for him to bed, we decided we were just going to go and hope that he’d be in the same area. That way, at least if he went into the timber a certain direction we could try to get into position to cut him off and get a shot.

We got up to the ridgetop, and Thomas said we had bumped some other bulls and cows and they were running right towards our bull and his cows. Thomas thought there was no way the bull was going to be there. It was windy and cold on the ridge, but we had to try. We got to within a few hundred yards of where we thought the bull was, and Thomas told me to get my bow out and get ready. We walked up and over the cliff, and I was very calm and composed.

I’ll never forget the moment when I looked below me and Thomas said, “There he is.”

We had a pretty good wind blowing and it was cloudy, so the elk weren’t really startled and didn’t know what we were. They started to move a little bit, so Thomas said to shoot because the bull wasn’t going to be there much longer. I got set up on a rock outcropping, sat down, and put the bow across my knee. It was a 90-yard shot, so I put the pin on the bull’s back ribs as he was quartering away and let loose. He ran down a little saddle with his cows, so we waited about 20 minutes and then I couldn’t stand it. I told Thomas that we had plenty of snow and the bull was going to bleed so we’d be able to track him.

We took off and went down to where the elk were. We saw tracks going off, and it was the bull. He had left his cows, so that was a good sign. Thomas found a little speck of blood in the snow, so we followed the trail, but then the bull headed straight downhill into a nasty canyon. I knew at that point he was hurt bad. We came to a bed where he had laid down, and it was filled with all the enzymes and stuff from a gut shot animal. We knew we had him, so we sat down and waited a few minutes. Thomas told me to be really quiet as the bull was going to bed again. We walked another 20 minutes, and then there he was. I put another one in him and watched him expire right in his bed.

It was an amazing feat for public land doing what we did on horseback. When we got back to camp, the other hunter from Oregon, Ryan, said this was the biggest bull he’d ever seen. They hunted another day, but I stayed in camp. Ryan killed a really nice bull with his crossbow.

I could not wait to get a tape on my bull, and we unofficially taped him out right at 400" net. Thomas said it was the biggest bull he’d ever been a part of and he was glad it was me. At no time did this feel like an elk hunt. I always felt like I was on a sheep hunt because of the elevation and type of terrain I was in. I’ve been on Stone sheep and Dall sheep hunts, but this elk hunt was rougher than those sheep hunts.